The season is drawing near, so that means we’re getting to the end of the Blue-Gold Game Reviews.

Here are the previous reviews:

We’re about a month away from the beginning of the season, so that means it’s time to start discussing the quarterbacks. Because we haven’t had enough of that this offseason.

We begin with the quarterback whose spot on the depth chart is the most clearly defined – true freshman Gunner Kiel.

Watching Gunner play in the Blue-Gold game, I saw a very raw quarterback with mounds of talent. He moved around the field much better than I anticipated and threw some pretty balls. But he has a lot of work to do before he’s ready to be the starting quarterback.

Look at this throw: 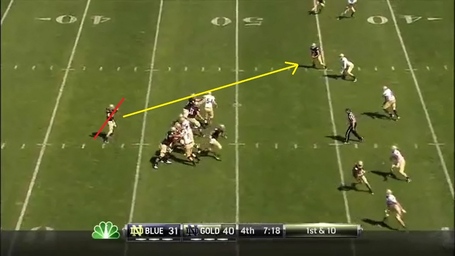 Kiel throws it out to his slot receiver on a simple stick route. But Gunner throws his front shoulder wide open and has his legs almost parallel to the line of scrimmage. Not surprisingly, Kiel throws the ball high.

Obviously, this is correctable, and a year of running the scout team will probably do wonders. In the limited practice footage we’ve seen this spring, it looks like Kelly has been personally coaching the quarterbacks and stressing fundamentals. Kelly notices this exact problem and tells Kiel to "shoot down the gun barrel" in the video. But I’m not too worried about this. Gunner isn’t a hopeless cause.

The next play I want to look at is a fourth down near the end of the game. 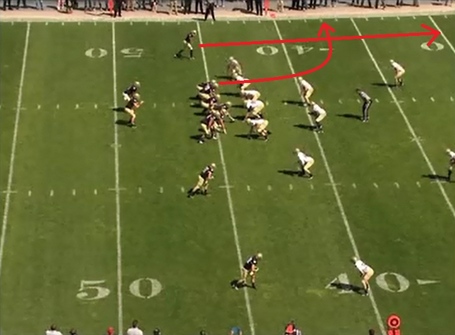 The Irish offense lines up in a standard spread formation. The Cat linebacker lines up over receiver Andre Jones, but jumps up to the line on a blitz right before the snap.

The Irish run a simple two-man route, one of Brian Kelly’s favorites. The outside receiver runs deep to clear out the safety and the cornerback, while the tight end runs an out route to occupy the space the receiver just vacated. 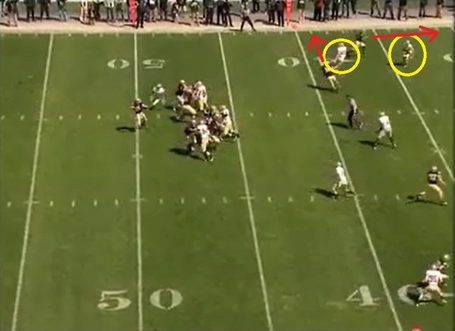 This is what Kiel sees right before he commits to his throw.

One of the middle linebackers bails out to cover the flat, but in the process overruns the tight end. The safety has to cover Jones as he goes deep.

Kiel has a decision to make here. I believe, in general, Kelly has his quarterbacks read routes from deep to shallow, which is why his passing game is known for picking up chunks of yards. The safety has Jones covered deep, but he is facing the wrong way with Jones running full speed. Jones has single coverage, but there’s no telling if he’ll be open when the ball gets to him. The linebacker, meanwhile, has no shot at covering Koyack on the out route. Kiel unloads and overshoots Jones.

I don’t know what Kelly’s rules are on reads like this, so I’m hesitant to call this a bad read. Maybe Kelly says, "If you see single coverage deep, always throw it." But if Kiel is looking in Jones’s direction, he has to see the linebacker sprinting into the flat ahead of Koyack and the safety sitting over the top. I would have liked to see Kiel check that down and pick up the easy first down rather than go for the home run. I’ll cut Kiel a little bit of slack though. That blitzing linebacker off the edge probably wasn’t helping matters.

This last play was probably a welcome sight for a lot of Irish fans. 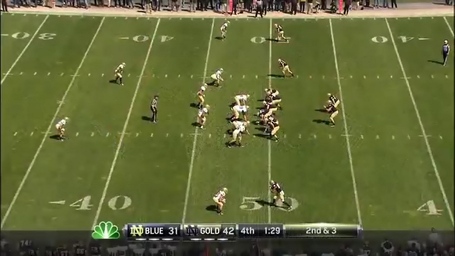 The Irish come out in another spread set. It’s 2nd and 3.

The defense runs the dreaded "rush four, drop eight seven" defense. How many times last year did we see Tommy Rees struggle to find open receivers in this situation? 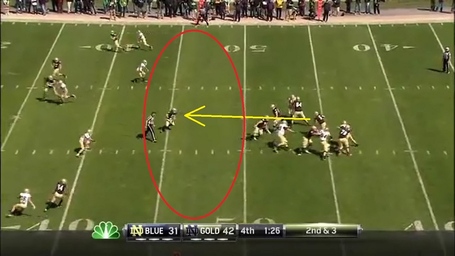 Instead, Kiel feels the pressure coming from behind him, steps up in the pocket, and takes off running. He has a lot of green in front of him and he picks up the first down easily, trucking Justin Utupo along the way. My one nitpick is that Kiel had his running back, Tyler Plantz, wide open in the middle of the field. I would have liked to see Kiel step up in the pocket and hit Plantz for the easy first down.

It’s nice to see an Irish quarterback pick up yards on the ground. As I talked about in my Essential Smart Football Review last week, forcing defenses to protect the middle of the field to prevent plays like this should open up the passing game for the Irish.

I think Gunner is an intriguing quarterback prospect for the Irish. Just from watching him warm up before the Blue-Gold Game I could tell he’s a very talented player. He has a great arm, he looks very fluid throwing the ball, and he is very athletic. I think he’s a great fit for Brian Kelly’s style of offense. He has the arm to make every throw and is athletic enough to pick up yards on the ground.

But as exciting as he looks, he’s not ready to see the field in 2012. His play during the spring game showed that he just doesn’t know the offense well enough to be the starting quarterback. He needs to make better reads, go through his progressions, and not try to run over defenders every time he carries the ball.

Even though I’m sure Notre Dame fans are sick of quarterback controversies, I think we’ll have another one on our hands next offseason. That is, unless EG lights the world on fire in 2012.