Remember the Blue-Gold Game? No? Well, I’m still going to write about it.

Here’s who we’ve looked at so far:

After journeying to the defensive side of the ball, we’re back to the offense.

Tyler Eifert has the starting tight end postion on lockdown, but Ben Koyack and Alex Welch are battling for the second tight end spot. With Eifert playing a hybrid TE/WR role, Koyack and Welch will primarily be asked to block, sometimes as a pseudo-fullback (harrumph).

Overall, I was most impressed with Welch in the Blue-Gold Game. He was definitely the better blocker of the two. I could have included about a half dozen other plays where Welch threw a great block.

That’s not to say Koyack had a bad game. He was solid as a blocker and caught four passes, including a touchdown. As an offensive weapon, he showed more potential than Welch. Unfortunately, Koyack won’t be asked to catch balls in 2012, he’ll be asked to open up holes in the running game, and Welch did a better job.

Let’s look at the plays in the video. 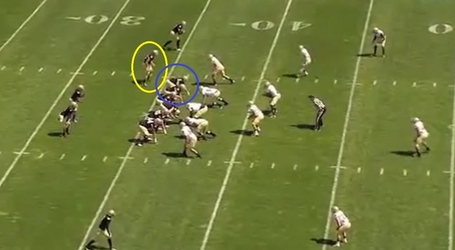 In the first play, the offense is lined up with Koyack (circled in blue) on the line and Welch (circled in yellow) flexed out a bit. The defense has both OLBs on the line, showing a 5-2 defense. The offense runs an outside zone to the strong side. 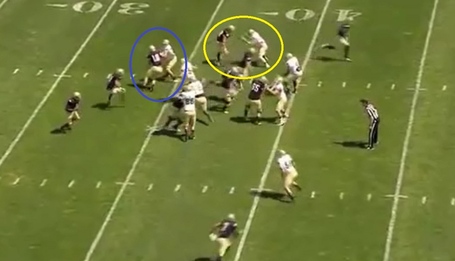 Atkinson takes the handoff and scoots outside, but Ben Councell blows up Koyack’s block. Atkinson’s hole is gone and has no choice but to stretch the play outside. Meanwhile, Welch is squaring up on Dan McCarthy.

Koyack can’t do anything as Councell cuts off Atkinson near the sideline. Welch has put McCarthy on roller skates and drives him to the sideline.

Welch did his job and took his man out of the play, but Koyack’s missed block prevented Atkinson from cutting upfield and picking up good yards on the play. Instead, GAIII reversed field and only got about three yards. 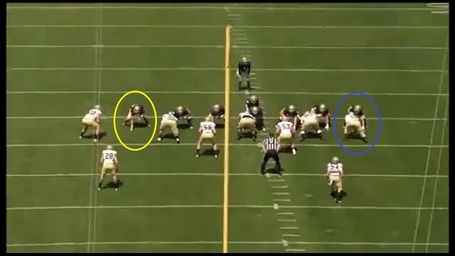 In this next play, the offense is lined up in a balanced formation with a tight end on each side of the line. The defense is showing a 5-2 defense again with four down linemen and Councell also playing on the line.

The offense runs an inside zone. The gaping hole Atkinson runs through is actually opened up by Zach Martin and Chris Watt. Watch the play again; those two perform textbook zone blocking. Martin and Watt double team the defensive end, Martin controls the block and plants the end in the ground, and Watt to move up and block a linebacker. Neither tight end is heavily involved in this play, but they both make nice blocks.

Welch (yellow) seals off Councell on the backside, an important job on this type of run. A free defender off the edge can blow up an inside zone very easily. Koyack (blue) also zone blocks perfectly. The linebacker, Anthony Rabasa, fires inside of Koyack, who uses Rabasa’s momentum to push him inside and back away from the play. Rabasa was in no position to tackle Atkinson as he ran past him. 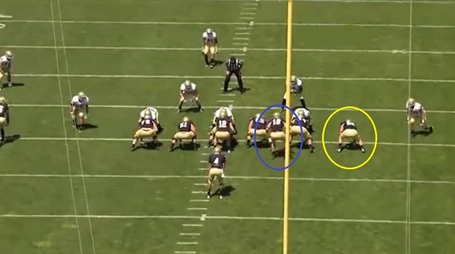 In the last play, Welch (yellow) is on the line with Koyack (blue) motioning into the backfield to play fullback. The defense is once again lined up in a 5-2 with both OLBs playing on the line. The offense runs Power O.

Welch and RT Tate Nichols double team the defensive end, while Koyack comes up to kick out the OLB, Councell. Unlike the last time Koyack took on Councell, Koyack stands him up.

Welch controls the block on the end, allowing Nichols to release and block the oncoming linebacker who threatens to blow up the play. Councell is going nowhere with Koyack in front of him. Bruce Heggie, pulling from his left guard spot, leads the way for Atkinson, who breaks off another good run.

So that’s a sample of how the two young tight ends fared in the spring game. As I said earlier, I think Welch outperformed Koyack as a blocker, but Koyack is more dangerous as a receiver, which could be very useful in the play-action game.

I see Welch as more of a blocking tight end, while Koyack is probably Eifert’s heir apparent as the offense’s receiving tight end. Koyack, like Eifert, is a good blocker, but Welch looked stronger and was much better at getting himself into position. The coaches have said they want the second tight end to be a blocker first and foremost, and anything they add to passing game is just a bonus. Based on what I saw, it wouldn’t surprise me if Welch saw the field a lot as a blocker next season. Of course, the Irish could also take a page out of Stanford’s playbook and put all three tight ends on the field at the same time. That would be a very difficult formation to defend.

I’m also not taking into account the addition of Troy Niklas to the stable of tight ends. His combination of size and strength could make him very, very dangerous on offense. But with the talent and experience the Irish have at the tight end position, I don’t think it would be a bad idea to let Niklas redshirt this season and learn the position. But no matter what, I think it’s safe to say the future is bright for Tight End U.