Five Wide Fullbacks: The "What to do with all that athleticism?" Edition

Share All sharing options for: Five Wide Fullbacks: The "What to do with all that athleticism?" Edition

Every week in "Five Wide Fullbacks," we give you five questions and five answers. Let's get this rolling.

1. Last week in southern California, you daily enjoyed perfectly stunning, sunny, dry, 78-degree days. This week in South Bend, you've daily . . . enjoyed hours of pounding thunderstorms mixed with 95-degree days of sweltering humidity. If you were a football coach or player trying to convince a recruit to attend Notre Dame, how would you pitch the weather to him?

The weather here can be intensely beautiful, and there's nothing like a crisp fall Saturday, but it can also be hell. I'll promise you this, though: it will make you tougher, mentally stronger, than any 60-degree, slightly-overcast winter day at USC will make you. Try walking on ice through driving snow when it's 6 degrees outside. Every day. For four months. That will give you mental toughness that those ‘Canes just won't bring with them to El Paso in January. Try walking to the stadium in a 3-piece suit in early September as the thunder rumbles in the distance, when you're soaked with sweat, burning in the 95-degree sun, and can hardly breathe the thick-as-water air. That will give you four-quarters of internal strength. That may also make your long snapper want to punch Purdue Pete in the helmet.

You want a little evidence to back this up? Sure, the SEC and certain Florida and California schools have done pretty well recently, but 4 of the 5 winningest teams in college football history enjoy Mid-west winters, and 12 of the last 15 Super Bowls have been won by cold-weather teams. Hypothermia? At Notre Dame, it correlates strongly with winning the Cotton Bowl (see Joe Montana, 1979).

2. This week, a former Notre Dame player called QB Everett Golson "the most talented human being I've seen on a football field ever." That's what we call "not sleeping on EG." We're a long way from knowing who will start for the Irish against Navy come September 1st, but if it's Tommy Rees, as some would wager, what will that mean for this "most talented human being" standing on the sideline under a red hat?

If Everett Golson does not take the field for that first, long-awaited drive against the Midshipmen early on September 1st, it will mean that he did not seize the job - that whatever he did in spring and fall camp, however hard he prepared and trained in the summer, it was not sufficient to make him the surest choice to lead the Fighting Irish to victory.

We know Golson has all the tools he needs - the arm, the mobility, the instinct, the knowledge, the time in Kelly's system - to claim that starting role. What we won't know until the head coach makes his decision is whether #5 will put them to use to outplay and out-lead the other QBs on the roster. Rees has a lot of experience and understanding going for him and that has, so far, allowed him to hold the position, albeit tenuously. Should Rees start on September 1st, should he remain the starter through the season (itself unlikely, given Kelly's recent history), the clock will begin ticking down for Golson. 2012 is his season to step forward - to seize what so many think is, by talent, by potential, by right, his to win or to let slip by.

3. Does Notre Dame truly suffer from an Ivy League culture nowadays? Is this a major impediment to future and sustained success with the football team? Does the success of Stanford over a two-year period so far offer hope for the Fighting Irish?

The University of Notre Dame ceaselessly strives for excellence across the board, in education and research and service, as in athletics. The push for a top-level business program, for a five-star humanities curriculum, for the best facilities and latest technology for science and engineering research, goes, in an important sense, hand-in-hand with the push for a return to dominance in the football program and other sports.

Where this striving for excellence on multiple fronts can at times pull in competing directions is in the recruitment of student athletes. The discipline and commitment it takes to be one of the fastest, strongest, smartest athletes in the country does not usually allow simultaneous accomplishments in the classroom at the high level Notre Dame seeks and demands. And as an institution, Notre Dame has consistently given relative priority to academic ability and drive over athletic superiority. "Student" comes before "athlete," as well it should.

This is no death knell to dreams of championship football, though. "Everybody says Notre Dame has to lower their standards when it comes to athletes because of the academics," 2013 Irish verbal commit and cornerback Devin Butler said at The Opening football camp just a few weeks ago. "I think with all of us going to The Opening, it shows that we have upped our standards and nothing has really fallen off. It's just been finding the right type of people. I feel like this year we have a special group. We have SEC athletes with Ivy League minds."

SEC athletes with Ivy League minds: that's a rare breed, but Notre Dame is in prime position to recruit just that type. Stanford has shown that it can work, albeit with a once-in-a-lifetime quarterback at the helm. Whether Notre Dame can reach and sustain a high level of success on the gridiron will depend on who they bring onto the field. Once again, it comes back to finding the right kind of guys - the guys who will strive for true excellence - all kinds of excellence. 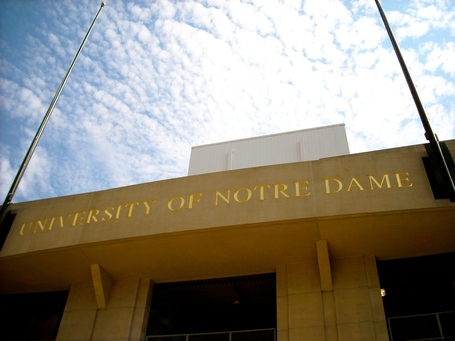 4. The 2012 Summer Olympics are about to begin. American football is decidedly not an Olympic sport, so imagine for a moment that you get to pick five current Notre Dame football players and drop them into an actual Olympic event in London. Who would you like to see compete to wear a different kind of gold?

1. George Atkinson III (RB), 100 meter dash: This isn't a stretch, of course, because Atkinson is actually a sprinter for ND. He ran the 100m (with his brother Josh) at the 2012 Big East Outdoor Track and Field Championships, clocking a 10.36 in the semi-finals. Who wouldn't want to see GAIII leave the blocks in a blaze of glory and be promptly left in the dust by Usain Bolt (who holds the world record at 9.58 seconds)? Bonus: in the clip above, Tom Hammond has the call on Usain Bolt's world record-setting 2008 Olympic sprint - a record he broke in 2009. Bolt - not Hammond.

2. Andrew Hendrix (QB), javelin: I don't know anything about the javelin. I don't know how it's thrown or who came up with it. But tell me you don't want to see Andrew Hendrix, who has clearly tried to knock linebackers out of games by throwing the football through their chests at 300 miles per hour, throw a pointy spear as far as he possibly can?

3. Braxston Cave (C), shotput: Braxston Cave has the biggest arms I've ever seen in real life. He has reportedly bench pressed 225 lbs. 37 times and 520 max - easily best on the team. And he is built for the shotput. O-linemen are no strangers to it - Cave did it in high school, and 2013 recruit Hunter Bivin won the Kentucky Class 3A title putting the shot a few months ago - and I, for one, would love to see Braxston take a crack at it.

4 and 5. Tyler Eifert (TE) and Troy Niklas (TE), beach volleyball: This one's too easy. Tight ends, like male beach volleyball players, are tall (usually ranging in the 6'4"-6'8" range), athletic, powerful, long, are both aggressive and smart, have great hands, and are, at the end of the day, physically freakish in a Herculean sort of way. Eifert/Niklas (USA) has "gold" written all over it.

5. You tend to include poetry with your "Five Wide Fullbacks" articles. Will you follow through on that precedent here?

Well, sure. But only with the caveat that my awaiting-fall-camp haiku is met by haikus composed by our illustrious commentariat below.

The 17-syllable ball's in your court, guys.