Share All sharing options for: Packaged Plays And The Notre Dame Offense

The game of football is like chess. Someone comes up with great new offense/defense, it takes the sport by storm, and then someone comes up with a counter and the next new great idea takes over. First it was the single wing, then T-formation, then the wishbone, then the West Coast Offense, and now it’s the spread. Unlike those old offenses, the spread has the ability to adapt to whatever new looks defenses give it. Once you learned how to stop the option (and that pesky fullback), a wishbone offense wasn’t too scary. But the spread isn’t based on a single play or formation; it’s more of a philosophy. It’s all about math – if the defense crowds the box, you throw a quick pass; if they spread out, you run it.

But as the years have gone on, defenses have started to adapt. Speed and quickness have become priorities at the outside linebacker and safety positions. Players who can attack the line on run plays but still drop back into coverage on pass plays are hot commodities. But the spread offense is starting to use a new weapon: packing run and pass plays together.

One of the questions an offensive coordinator has to ask before every play-call is "What is the defense doing and how can I beat it?" Is the defense going to be in Cover 2? Cover 3? Will they blitz? There are a ton of options on every play, and it’s the play-caller’s job to dial something up that will gain yards.

One approach is to package together routes and concepts that beat multiple coverages. For example, the receivers to the right can run routes that beat Cover 2, while the receivers to the left run routes that beat Cover 3 Here’s a video of Miami Hurricanes’ offensive coordinator Jedd Fisch breaking down the shallow cross concept (called "drive" in the WCO) and how they tack on a smash route combination on the backside.

The smash is designed to beat Cover 2 defenses by isolating the flat defender and forcing him to choose between covering the inside receiver on the flag route or the outside receiver on the five yard curl. As Fisch said, if the defense shows Cover 2, it’s the QB’s job to recognize that and make the smash his primary read. If they are not in Cover 2, he needs to look at the crossing routes.

But there are drawbacks to this approach. First, the quarterback better be right about his read or else the play isn’t going to work. With as complex as defenses have become, just because they showed Cover 2 before the snap (or even right after the snap) doesn’t mean they’re in Cover 2. Second, the offense is limited to two-receiver route combinations (though it is possible to add a third receiver depending on the play). This limits the number of options the quarterback has. He essentially has to split the field in two and hope he finds something to the side he chose.

The other idea is to combine three- and five-step reads in a single play. The concept is simple: the three-step drop route combinations should be quick-developing routes that beat certain coverages. If the QB sees those coverages, he’ll have an easy completion. If the QB sees something else, he finishes his five-step drop and looks for an open man. This allows the quarterback to read the whole field instead of half of it.

That’s not to say these aren’t good approaches; there’s a reason many teams do these things. But this only applies to pass plays. What about the running game? What if there was a way to package running plays and passing plays together?

There is a way, and it’s something that is quickly catching on across college football. Dana Holgorsen was one of the first to start using this concept. He used it at Oklahoma State and now at West Virginia. In fact, Todd Monken, Holgorsen’s successor at offensive coordinator for the Cowboys, has built on his work. With a trio of Brandon Weeden at quarterback, Justin Blackmon at receiver, and Joseph Randall at running back, the Cowboy offense could march up and down the field with little variation in their play-calls, but to the defense it looked like chaos because each play could be run two or even three different ways.

Here’s a video of Oklahoma State and West Virginia running their packaged plays.

There are a number of combinations in this video - stick/draw, stick/inside run/hitch, stick/WR screen, all-curl/RB screen, and shallow cross/RB screen. Screens are often attached to run or pass plays because they typically take a long time to develop. The QB can read the pass route or run play first, and, if it isn’t there, he can throw the screen.

So what does this have to do with Notre Dame? Well, the Irish have been doing something similar, though not on the same level as the Cowboys or Mountaineers. Notre Dame uses the stick/draw combination in their offense. . New offensive coordinator Chuck Martin diagrammed this play at the football clinic a few months ago. 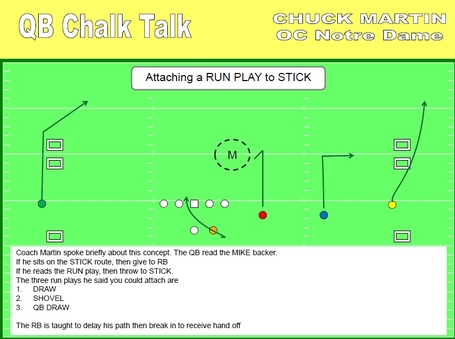 What is the stick/draw? As the slide says, the QB reads the Mike linebacker. If he widens out to cover the receiver on the stick route, the QB hands the ball off on the draw. If the linebacker stays back to cover the draw, the QB throws the stick. This is not a play designed to pick up a lot of yards; it’s designed to get five or six easy yards. It’s a great play on 1st and 10 or 3rd and 4, but would probably draw some boos from the crowd on 3rd and 8.

Here’s a video of Notre Dame running the stick/draw play this past season.

Let’s break these plays down. 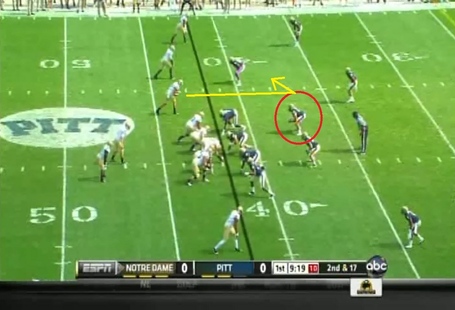 This first play is from Notre Dame’s game against Pitt. The circled player is read by Tommy Rees. 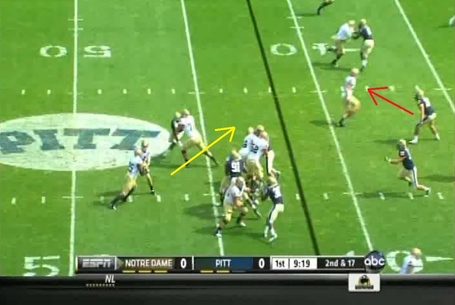 The linebacker widens to cover Tyler Eifert, so Rees hands the ball off to Jonas Gray on the draw. Gray doesn’t read the hole correctly and is tackled for no gain. 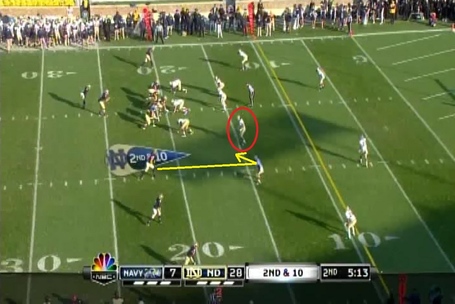 This next play comes from the Navy game. Once again, the circled player is read. 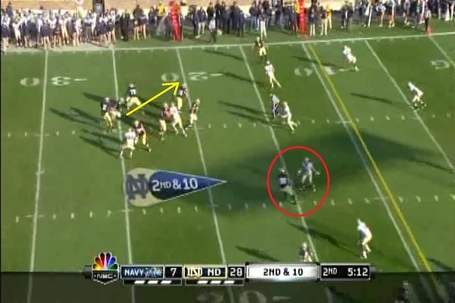 And once again, the linebacker goes after Eifert and Rees hands the ball off. Cierre Wood picks up about five yards on the play. 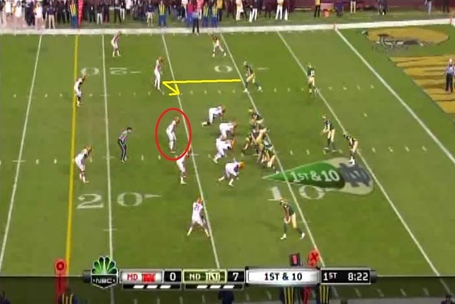 The last play comes from the game against Maryland. Jonas Gray motions outside, creating confusion in the Terrapin defense. The player lined up over Eifert covers Gray, and the circled player has to defend Eifert. 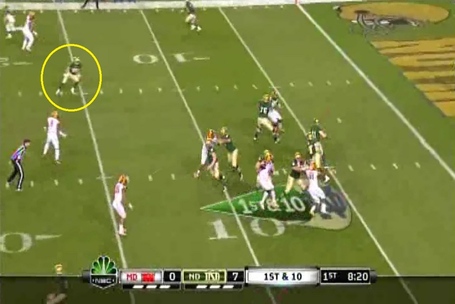 The linebacker is slow to get out to Eifert and he is wide open. Rees hits him for an easy gain of about five yards.

So what are the advantages of packaging plays? The old triple option was always attractive because it allowed the offense to have up to three players carry the ball on a single play; this allows the offense to "option" plays based on how the defense behaves after the snap. Defenses have become very good at disguising coverages and the quarterback doesn’t need to rely on pre-snap reads in these plays. It’s a concept that can easily be adapted to many different types of offenses, not just the spread. It should be attractive to offensive coaches since it allows the offense to essentially run two or three different plays at once.

It will be interesting to see if this idea spreads throughout college football and if Notre Dame builds on the stick/draw play and adds more packaged plays in 2012.