This is the third uniform concept for the offseason, if you missed the first two click the links below.

After dabbling in the fantasy of the previous installment, we bring things back to reality with what is a complete new green uniform set for the Fighting Irish.

This is the Shamrock Series 2.0, a uniform that can be worn for Notre Dame's annual neutral site game, at random neutral site games like this fall in Ireland, or even if the team wants to switch to green full time for a number of years.

More details after the jump. 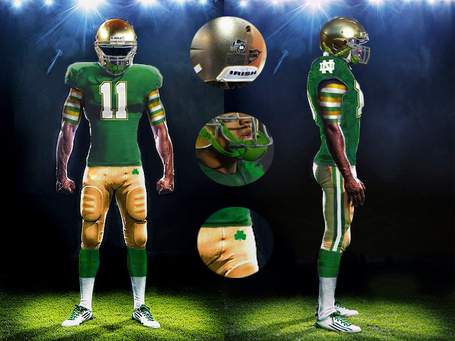 Each set of these uniforms includes the new Hydro Graphics helmet, completely unadorned. For purposes of the Shamrock Series we've added that official logo to the back of the helmet.

The only addition to the helmet for the above uniform set is a green chinstrap in place of the traditional white.

The original plan for these uniforms was to mix two (or even three) shades of green. That concept would have used one shade as the dominant color with the other shades used lightly as secondary colors. As it is, we decided to stick to one shade of a fairly neutral or "regular" looking green for these uniforms.

The green jersey features a white monogram on the shoulder sleeve, as well as tri-color numerals on the front and back. The gold used here---and for the undersleeve stripes which draw their inspiration from the Marquette basketball uniforms---is much closer to yellow for bolder outlining.

For the first time in school history, stripes adorn the pants as a white stripe is surrounded by green stripes on each side. Five shamrocks originally ran vertically through the white stripe but they were removed and one shamrock was placed on the front left hip of the pants. 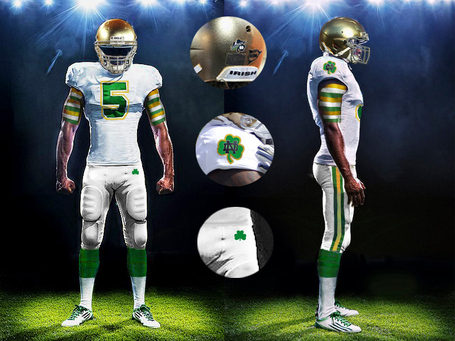 The road uniform is much more bold.

The helmet remains the same except for the traditional white chinstrap replacing the green from above. This white jersey again features tri-color numbers on the front and back, while a green shamrock outlined in gold with the monogram inside of it graces the shoulder sleeves.

For the first time since the standardization of the modern football uniform, the Irish will wear white pants. This time the striping pattern is one gold surrounded by two green.

The socks and cleats remain the same as the home uniform. 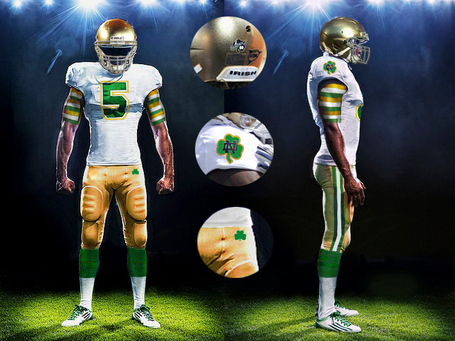 The road white jersey has the option of wearing the gold pants as well.