Five Wide Fullbacks: Fake It till You Make It

Share All sharing options for: Five Wide Fullbacks: Fake It till You Make It 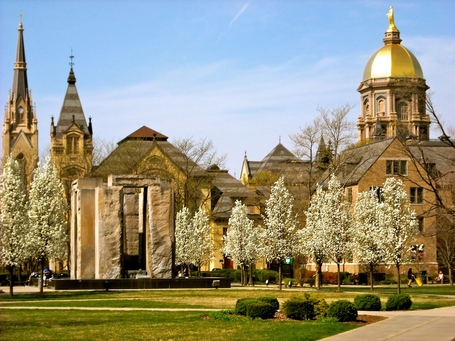 Campus in the summer: just waiting for the crowds of fall.

1. Give us one play on offense that you want Notre Dame to run on a consistent basis. Explain why you think it should be used and why it will be successful.

I'm going with the fake kick - fake punt, fake field goal, and fake extra point. Why? Well, many think that kicking is the most boring and predictable part of the game as it is, and this would be an amusing way to endlessly troll both Mark Dantonio and all those who justly mock our punt return "strategy" of 2011. If Coach Kelly called up the fake punt at least half the time, field position be darned, every team we faced would be forced to keep its defense on the field and nobody could gain more punt return yards on us than John Fair-catch Goodman did on any of them last year. How does that .6 yards per return taste, everybody?

Are we going for 3? Snap! Don't think so - 7 or nothing! Are we gonna get that extra point? Snap! How about 2 extra points?! Everybody ready for kick-off? Holy crow - is that Kyle Brindza hurling the ball downfield to an ineligible special teamsman? Uhh . . . . No one will ever have a clue what the Irish are doing when they're supposed to simply put a foot to the ball.

Just think of the legend that would make of Coach Kelly, regardless of whether it launched the Fighting Irish to the most glorious heights of winning or plunged them to the despairing depths of losing. How we would be reviled by opposing coaches, forced to abandon their arrogant disregard for the possibility of the fake punt, field goal, and extra point!

Team slogan? Book title? Enduring hashtag? "Fake it till you make it." Absolutely.

Now Kelly just needs to focus all his recruiting attention on the elusive punting fullback . . . I wonder what kind of holder Andrew Hendrix would make?

No big surprises here from me.

2012 is not the year for the Fighting Irish. Facing what is likely the toughest schedule in the country, traveling the 5,000 miles from Dublin to Los Angeles over the season, led by a brand new (I hope) quarterback, defended by an inexperienced and thin defensive backfield against a handful of Heisman contenders - matching last season's 8-win total will be a fair accomplishment for the Irish in 2012. Reaching the 10 wins needed to possibly compete in a BCS game is out of the question, barring a close-to-miraculous or unprecedentedly lucky season. (It is technically possible for ND to go to a BCS game with just 9 wins if they finish ranked among the top 14 teams in the country, but they've never been selected to one with fewer than 10, so we'll go with that until the trend is broken.)

2013 needs to be the year for the Fighting Irish. The schedule should be a bit more manageable in 2013 (goodbye, messieurs Robinson, Jones, and Barkley!), the Irish are likely to have a quarterback going into his second season, many of Brian Kelly's top recruits will (hopefully) have developed into experienced top-rate players, and if Kelly doesn't make 2013 his year, even the most even-keeled of Irish fans are going to start asking some tough questions about his tenure. I think a BCS game is indeed in the cards for the 2013 Irish, and I think that it will finally be a win.

3. This week on Twitter, @ESPNCFB contemplated the ten worst feelings (#10WorstFeelings, naturally) in college football. As Fighting Irish fans, we seem to have a particularly profound (and particularly Irish?) familiarity with many of those unique kinds of suffering. What would you say are the top five worst feelings in Notre Dame football?

Since they are the most stinging, I'll limit my range of possible worst feelings to recent on-field history. So many to choose from . . .

5. Losing in the excruciating last seconds of the game. By a touchdown (or less). For the fourth time in a row. To end the season.

4. The endzone interception. Especially the second in the game. Especially when you know it's going to happen before the ball has left Re . . . I mean, the quarterback's hands.

3. Fumbling the ball at the 1-yard line.

2. Watching that fumbled ball be returned 99 yards for a touchdown.

1. For the second time in the season. At home. In the first night game in ND Stadium in years. Against the most hated rival.

4. Chase Stuart at Football Perspective took a numbers-based look at the relationship between passer rating (or pass efficiency) and wins using 20 years of NFL quarterback data. He concludes that "interception and completion percentage variables [do] nothing to make the formula more predictive" and instead, "using net yards per attempt . . . is the simplest and best way to predict future performance." NFL and college football are two different things in key ways, but nevertheless, discuss.

Since we're talking about the predictive value of quarterback stats here, it seems like we might as well apply this to our "assumed" starting quarterback and possible off-season cage fighter, Tommy Rees.

Tommy looks best as a quarterback - 22nd nationally - when we turn to his completion percentage (65.5%), but from the number-crunching, it looks like the correlation between completion percentage and winning is not statistically significant. We should believe this is so when we see Kirk Cousins (MSU) come in at number 40, Landry Jones (OU) at 42, and Denard Robinson (Michigan) at 98.

Stuart's statistics are telling us not to worry about completion percentage or about counting interceptions (though he says nothing of unaccountable fumbles) in guessing how Tommy will do in 2012, but instead, to focus on his 7.0 yards per attempt in 2011 (up from 6.7 in 2010).

If there is any win-predicting value in our quarterback's yards per attempt, the numbers aren't adding up in Tommy Rees's favor. 71st nationally does not a BCS contender make.

Then again, our other QBs are, can we say, still off the charts (both literally and in the hearts of Irish fans).

5. Last week in Five Wide Fullbacks, Mouth of the South cleverly alluded to Irishman W. B. Yeats's famous 1920 poem "The Second Coming" in his title - "What Passes As the Rough Beast That is Sport Slouches Toward the Weekend?" Does that poem have anything to do with American football?

Scholars have long held that this poem does not in fact have anything to do with football, but I think that Mouth may be on to something here. I reread the poem myself and found that it recalled something of the at-times despairing shock and frustration of being a Fighting Irish fan.

Could it be mere coincidence?

It turns out that with just a few slight adjustments, Yeats's "The Second Coming" in fact appears to recount Notre Dame's 2011 season opening loss to USF. Witness:

Fumbling and fumbling in the opening game

The wideout cannot hear the quarterback;

Mere anarchy is loosed upon the field,

The rage-dimmed coach is loosed, and everywhere

The ceremony of hopefulness is drowned;

The best lack all composure, while the worst

Are full of passionate incompetence.

Surely some rain delay is at hand;

Surely a second half is at hand.

The second half! Hardly are those words out

When a vast image out of the Vault of Tradition

Troubles my sight: a waste of torn up grass;

A shape with bullish body and the head of a man,

A Holtz blank and pitiless and a son,

Is moving its green thighs, while all about it

The delay comes again but now I know

Were vexed to nightmare by a fumble returned,

And what young QB, his hour come round at last,

Slouches toward the sideline to be cursed?

Was Yeats writing forebodingly of our Irish? Well, probably not. But he did believe that history was cyclical, which means that the Fighting Irish will be National Champions on the gridiron again . . . in roughly the year 3924. Hang in there, Irish fans.