The Blue-Gold Game was two months ago, but that’s not going to stop us from talking about it.

Here’s who we’ve looked at so far:

Grace had a solid, if unspectacular, spring game. While he didn’t make a ton of tackles or blow up any plays, he did a lot of things right.

What I liked the most about his play was the way he always knew where to go on running plays. Granted, the Irish ran about three running plays the entire game, but he was never fooled and filled his gaps well. However, he had trouble getting off blocks and got pushed around a few times.

Let’s start with the good before moving on to the bad. 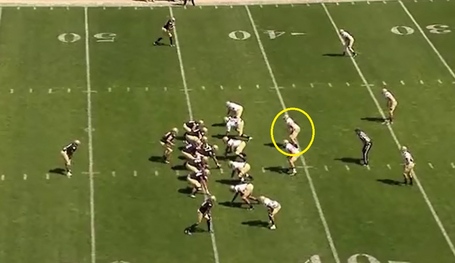 In the first play, the Irish offense is lined up under center with two tight ends. The defense has four down linemen with the Dog linebacker playing near the line as well.

The offense will run Power O. The tight end on the line will block down on the defensive end along with the left tackle while the tight end acting as a fullback will kick out the outside linebacker. Grace’s responsibility is to fill the gap between the tight ends before the backside guard can pull around as the lead blocker. If he gets there too late, the guard will block him and the running back will have a lane to run through. 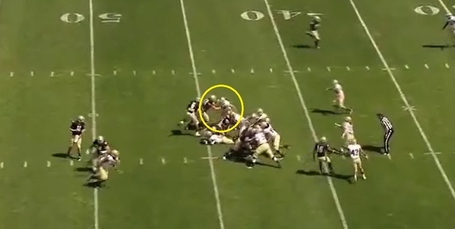 The defensive line does a nice job clogging the running lanes. Nick Martin gets to Grace, but not before Grace fills the gap Riddick is aiming for. Theo has no choice but to bounce the play outside. Ideally, there would be unblocked safeties or corners waiting for him, but there’s no one out there.

When Riddick took the hand-off, he initially ran towards the middle of the line, not outside. Whether Riddick intended to do this or was confused what the call was is unclear, but the safeties bit hard, and Austin Collinsworth was out of position. He still managed to get to Riddick about three yards past the line of scrimmage, but Riddick stiff armed him to the ground. Not a great showing by the other werewolf.

Even though Riddick picked up good yardage on the play, Grace played his part well. The Power O play is designed to hit the gap between the tight ends, and if it’s not open the play is usually unsuccessful. Grace did a nice job taking the gap away and forcing Riddick outside. 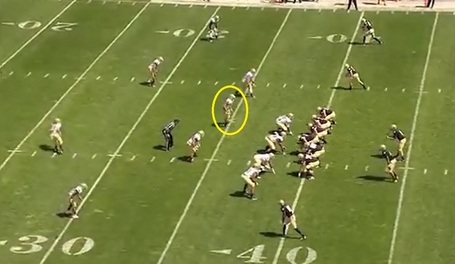 In the next play, the offense lines up in the shotgun with one tight end and three wide receivers. GAIII motions into the backfield. The defense is in its base 3-4. The offense runs an outside zone. Carlo Calabrese takes away the cutback lane to the inside. Grace needs to get outside the defensive end and fill a running lane. 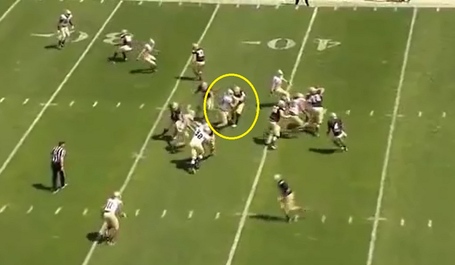 Atkinson can’t get outside and tries to come back inside. Christian Lombard tries to block Grace, but he shrugs him off. Atkinson can’t go anywhere except into Grace’s arms. Grace wraps him up for minimal gain.

One note on this play: This highlights how the Irish offense can use motion to create an advantage. Look at the first picture – Ishaq Williams is initially covering Atkinson, who’s lined up in the slot. After he motions to the backfield, the defense doesn’t shift and Williams isn’t covering anyone. To the right of the center, the offense has five blockers taking on five defenders, two of which are ten yards off the line of scrimmage. This should play in the offense’s favor, but poor blocking takes that away. This might be something to keep an eye on this fall.

Now let’s look at the not-so-good. 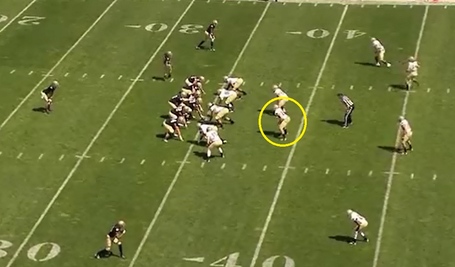 The offense is in the same formation as before, but the quarterback is under center. The defense is in a 4-3 look. The offense runs another outside zone.

Grace is on the backside this time. He needs to watch the cutback lanes and then run to the ball when the running back commits to running outside. 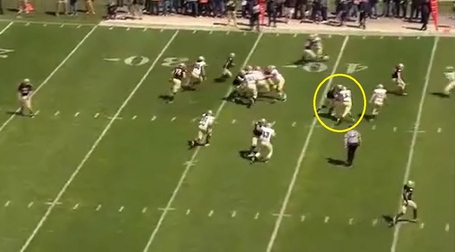 Mike Golic gets to Grace first and puts him on roller skates. Grace ends up about 15 yards downfield by the time the play is over.

This happened a few times in the game. Grace can’t let linemen shove him downfield like in the last play; he needs to beat those blocks and make plays. That’s easier said than done, but it can be the difference between giving up one yard and giving up ten yards.

Overall, I’d say Grace still isn’t quite ready to be a heavy contributor on defense. But that’s ok, because he’s sitting behind two seniors with three years of starting experience at one ILB spot and an All-American at the other. Another year spent getting stronger and becoming more familiar with the defense should help get Grace ready for 2013.