If you missed the first OFD uniform concept, click here for The New Gold Standard.

The second design in this collaborative effort between fishoutofwater and myself takes the uniform game to the next level. Or even several levels above that.

Do you think Notre Dame is cursed?

Sick of the Irish blowing games in the most excruciating ways?

Ever wonder if there's something extra that can give the team the edge it needs to win every week?

This uniform has all the answers. It's neither poor coaching, high academic standards, nor a tough schedule that prevents Notre Dame from winning national championships---it's that the program never tapped into the power of The Leprechaun Warrior.™

Now there are no more excuses.

The Leprechaun Warrior™ will lead the Irish to victory with the following uniform enhancements: 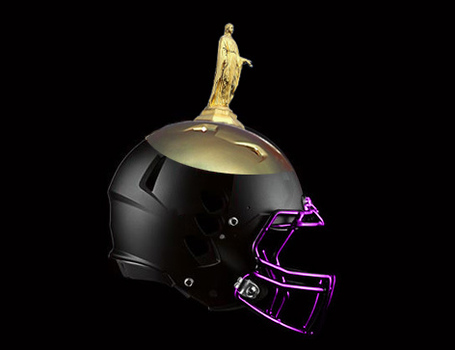 Notre Dame needs to stay hip, and there's nothing more hip right now than a matte black helmet. The dull dark finish is a major departure from the classic gold helmet, but every leprechaun warrior needs a pot of gold.

And thus, the world's first ever pot of gold helmet.

To keep the authenticity, the statue of Our Lady arises from the gold inside the pot. The combination of gold and statue is a more genuine representation of the University of Notre Dame and pleases the ghosts of yesteryear---not to mention the Mother of God.

The cutting edge thermochromic mood facemask has a wide range of color---from pale shanty white, to summer Irish tan, and all the way to full blown-gasket purple. 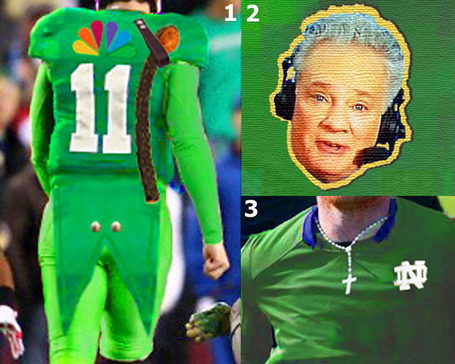 In conjunction with Adidas and Galway Sports Ltd, a state-of-the-art TECHFIT leprechaun outfit made fully functional for the game of football---including authentic coattails.

Attached to the uniform is a shillelagh club made of oak from the forests of Killarney. It can be used to "give opponents something to think about" at the bottom of piles and also to smack the yellow seats in order to wake up the crowd at home games when the team is up by 50 points in the second half.

Even the most dedicated players need some motivation and what better than the One True Infallible Voice of Notre Dame football? The players can constantly remind themselves how important it is to play well for their announcer by tapping the patch after big plays and touchdowns and saluting Hammond up in the press box overlooking the field.

The power of having your name called by Hammond on television with such passion, fire, and emotion clearly gives the lads an advantage no other program has.

There's no better way to stay stylin' while also rep the Virgin Mary than to rock a rosary around your neck. Seriously, the school is named after Mary and the team hasn't been doing this? Why?

This fashion accessory is guaranteed to bring in at least two blue-chip recruits every year---especially from the southern parts of California. 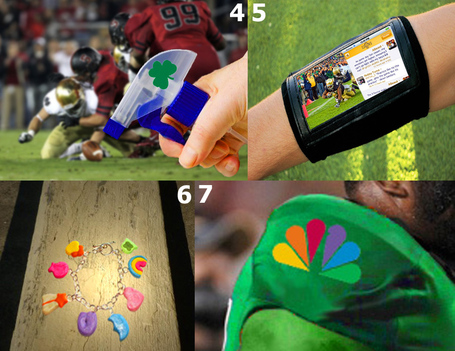 There's no need to argue about natural grass or field turf anymore once each player is issued a divot repair spray bottle, the contents of which are assembled by Fortune the groundskeeper.

The secret mist magically repairs divots as large as two feet in diameter and actively regrows natural grass within seconds. It also forces back-up players to run out on the field and meticulously inspect the grass after every play while the starters can huddle up like real men and forget the sissy no-huddle offense.

There's an ongoing debate about whether Notre Dame Stadium should install a jumbotron and how much the players would love it. Now, each Irish athlete is fitted with a wrist band complete with full video and replay capabilities as well as a Twitter app.

This way the fans don't have to have their jolly good time in the stadium ruined by a gaudy video board and the players can satiate their desires to watch replays of their most sick tackles and receptions. The Twittertron™ also requires that PA announcer Mike Collins read at least 2 tweets per quarter from the players as they live-tweet from the sidelines, in the huddle, and in the end zone.

You can work on fundamentals during the offseason and in practice, and you can cite fancy statistics about turnovers regressing to the mean over time. That's all fine and well but the Leprechaun Warrior™ is about winning and doing it in any way possible.

This new innovative uniform channels the power of Lucky Charms marshmallows and harnesses their secret power, before now only known to leprechauns, to erase turnovers. If an interception is thrown by Notre Dame, all it takes is the ingestion of one marshmallow by any player and the down is replayed.

With 8 charms for 82 players that means no more turnovers, ever.

The Leprechaun Warrior™ does without the Notre Dame monogram in favor of the NBC corporate logo, featured prominently on the sleeves and back of the jersey. The reasons are obvious: the team will gain far more money from the $12 million annual payments from the Peacock Network for the advertising rights than it will from jersey sales with Notre Dame logos.

More money equals more Lucky Charms and the latest updates to the Twittertron™, which in turn equals a happier and more successful football team. 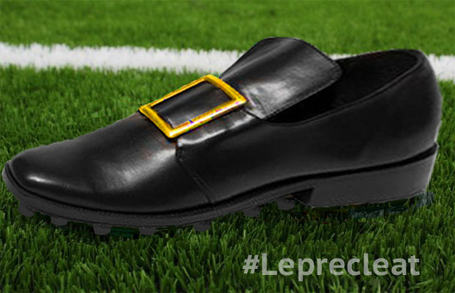 The last and maybe most important accessory to the uniform is the official footwear of the club: the Leprecleat.™

Made in Birmingham, Alabama to ensure SEC speed by real leprechauns imported from the Emerald Isle, the Leprecleat™ is the latest in football cleat technology and style. As you may know, leprechauns take immense pride in their shoemaking and here they provide the Fighting Irish with the best footwear possible, including the world's lightest gold buckle.

One Foot Down followed the rainbow to its end, and what we found there was the Leprechaun Warrior.™ It's a gift from above and a blessing for the Fighting Irish.

Check out all the uniform concepts for the B1G Ten from Black Heart Gold Pants HERE.