One of the offseason projects we've been working on at One Foot Down is a series of uniform concepts for the Fighting Irish. Before you start posting these pictures elsewhere, remember they are just concepts and not official new uniforms coming out this fall---although this particular design wouldn't be a bad idea if it were!

This is a collaboration between fishoutofwater and myself, and we'll be posting several more concepts over the coming weeks.

This first concept is called the New Gold Standard, our idea of what the modern standard Notre Dame home and away uniform should look like.

More details and explanations after the jump. 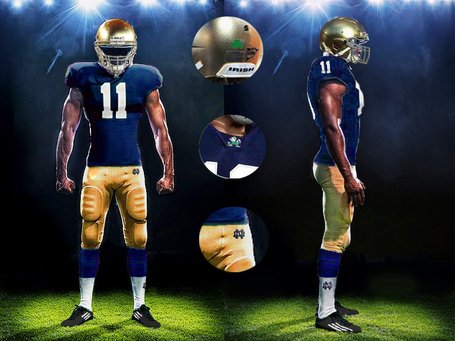 We replaced the old helmets with the new shiny lids made by Hydro Graphics Inc. as they look phenomenal both here in concept and on the field.

We are discontinuing the American flag on the back of the helmet that has been there since 9/11 with a plain green shamrock.

One of the main ideas for this concept was to mesh some new ideas with an overall traditional look. This was more true for the above home uniform, more so than the away uniform.

For the first time ever, the fighting leprechaun makes its way on to the uniform at the base of the collar.

With this home uniform, we wanted to lighten the shade of blue and move it away from the more black hue the team currently wears. With this shade of blue we believe we found something that is sharp, yet still firmly in the realm of navy blue.

The pants were more tricky to nail down in this concept---we wanted to attempt to match the helmet---but those efforts did not produce something worthwhile. Needless to say, the equipment staff is going to have their hands full finding a gold hue that matches the helmet AND doesn't look ridiculous.

We moved in the direction of the old gold pants worn in the past for the Irish and away from the dull sandstorm color used last season. That produced a nice golden color that fits nicely into the overall scheme and is a touch darker than fans are accustomed to. You'll notice we kept the blue ND monogram on the left front hip.

During the warmer months the team should wear white socks that extend to the mid-calf, but for the colder games and purposes of this concept, we created a full-length sock that is two-piece and features the ND monogram.

Of course, to pull it all together the team is wearing traditional black cleats. 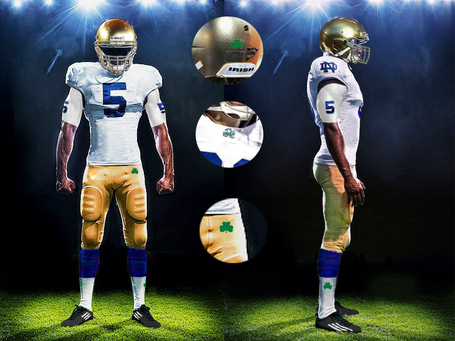 While we strove for a very traditional-looking home uniform, the away set is a little more ambitious and modern.

We took a page out of the Dallas Cowboys book and used a slightly brighter shade of blue for the away uniform in comparison to the home uniform. The thinking was to get away from the nearly black shade of navy blue the team has been using, and create a color that is vivid and pops against the white background.

The helmet remains the same, and the leprechaun is also at the base of the collar on the road jersey.

The away uniform also adds the modern white under-sleeves complete with the players number. Both the sleeve number and monogram on the shoulder are blue outlined in gold---the numbers on the front and back are without any outline to preserve the traditional look of the jersey.

The rest of the uniform remains the same as the home except a green shamrock replaces the monogram on the pants and socks.

Your thoughts on the New Gold Standard?