After a week off, we’re back with another breakdown of individual performances in the Notre Dame spring game.

Here’s who we’ve look at so far:

After focusing on the offensive side of the ball in the first two installments, let’s shift gears and look at the defense. First up is one of the players vying for the Dog linebacker position, rising sophomore Ben Councell.

Let’s jump right to the analysis. 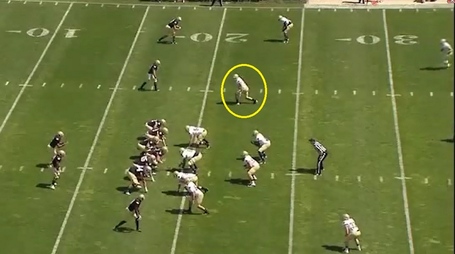 The offense is lined up with three wide receivers. Councell is matched up with slot receiver Robby Toma. 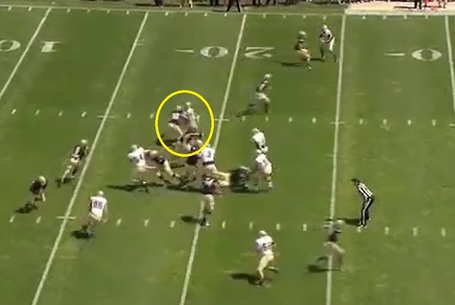 The play is a zone read with the outside zone to the wide side of the field. Everett Golson hands it off after the backside defensive end takes away the quarterback keep.

Councell reads the run play all the way and attacks the line of scrimmage. His job on this play is to set the edge and keep Theo Riddick from bouncing the play outside. He engages with Alex Welch, who comes up from his tight end spot on the line. 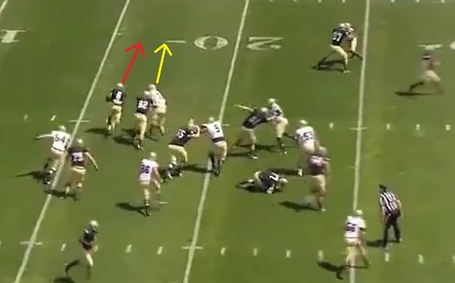 Riddick does cut outside and it’s up to Councell to stop him. However, he was not able to move Welch at all and Riddick can get around him easily. Councell is flat-footed and changing directions; his best hope is to get an angle on Riddick and minimize the damage. 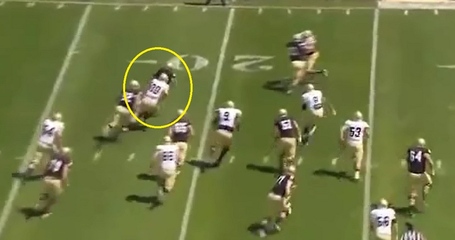 Councell makes a poor choice and decides to race Riddick to the sideline. There are few players on the team faster than Theo Riddick, and a 240 pound linebacker is not one of them. Riddick gets a step on Councell easily and picks up nine yards.

Councell wouldn’t have stopped Riddick from gaining yards, but he could have saved three or four yards, giving the defense a more manageable second down. 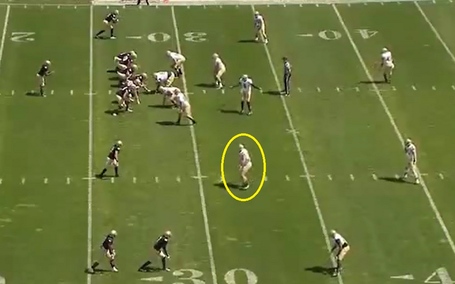 In this next play, Golson has an empty backfield with four receivers. Theo Riddick is lined up directly behind TJ Jones. Councell is covering Robby Toma in the slot again. The offense is telegraphing a screen. 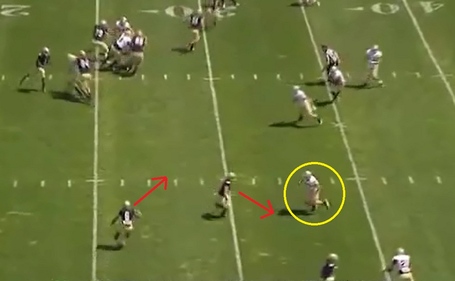 Sure enough, the offense runs a screen towards the middle of the field. Toma runs outside to draw his man, Councell, away from the play. 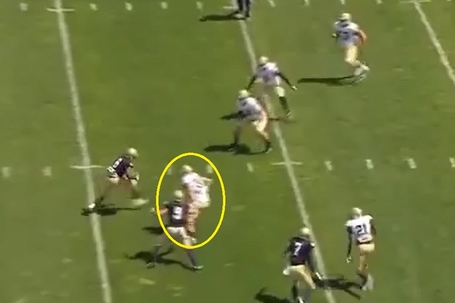 It won’t show up in the box score, but Councell executes his job perfectly. If Councell over-pursues and Riddick cuts to the outside, he busts off a big play. Instead, Councell plants himself firmly in Riddick’s way and forces him back towards three unblocked defenders. Riddick still makes a nice move and picks up about nine yards, but Councell does a nice job executing his assignment. 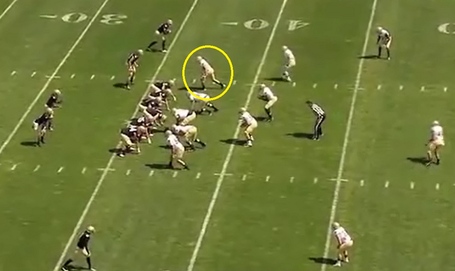 The final play is another run. This time, the offense is lined up with two tight ends. Alex Welch is the attached tight end on the line and Ben Koyack motions to Welch’s side. The defense has both outside linebackers on the line, showing a 5-2 look. 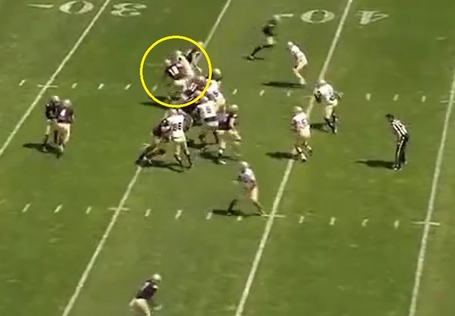 The play is another outside zone. Councell does a better job taking on the block and knocks Koyack back a step.

Unlike last time, Councell gets into the backfield and is able to release off his block. Atkinson tries to go outside, but Councell has a head start. 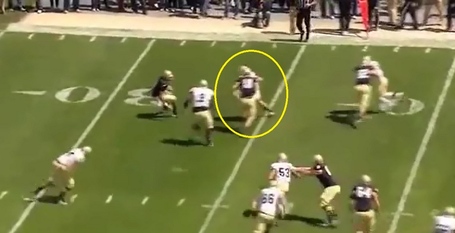 Councell doesn’t allow Atkinson to turn the corner. GAIII instead reverses his direction and goes the other way. Again, this play won’t show up in the stats, but Councell did exactly what he was supposed to.

It’s hard to tell exactly how Councell played in the Blue-Gold Game. The Dog linebackers didn’t make much of an impact in the game. I was mostly interested in how Councell looked in coverage, but he was hardly involved in the pass game. He played almost exclusively in zone coverage and the ball never went in his direction. The plays he was involved in was a mixture of good plays and not so good plays.

Councell didn’t separate himself in the race for the starting Dog linebacker spot in the spring, so Irish fans will probably have to wait until the fall to get answers at that position.