The Blue-Gold Game Told Through Pictures

Share All sharing options for: The Blue-Gold Game Told Through Pictures

While NDSPREAD has been busy cutting up game film for all to enjoy, I decided it was time that I got busy and put some pictures out there from the Blue-Gold Game for all to enjoy.

Here is a view of the field from our seats: 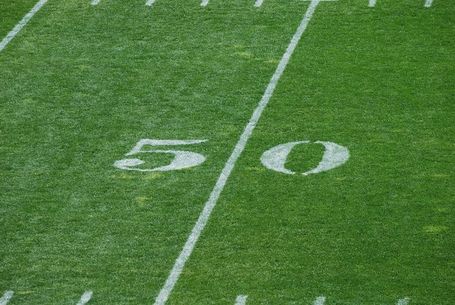 Word is that there is some negotiations going on about giving the OFD staff some season tickets here. Not really, but you can imagine how sweet that would be--even if you have to hear "Crazy Train" a million times per game. ALL ABOARD!!! AYE-AYE-AYE

Bobby D was chatting up some recruits before warm-ups. Do Want? Not when it comes to Bobby D--it's all WILL HAVE 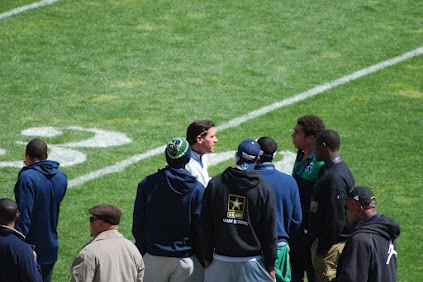 Justin Tuck got a little recognition pre-game. He is an extremely large human being. 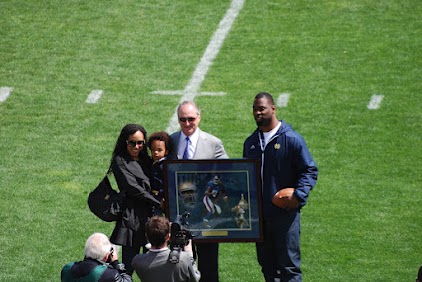 There was a Goldrix sighting in pregame warm-ups. 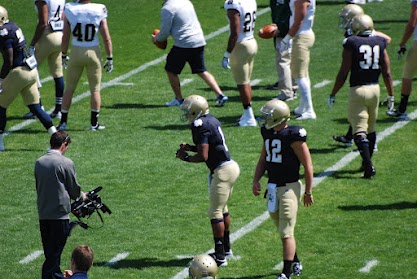 Kona Schwenke and John Goodman were chosen as game-day captains. Not sure if a wrestling match is about to break out or what... 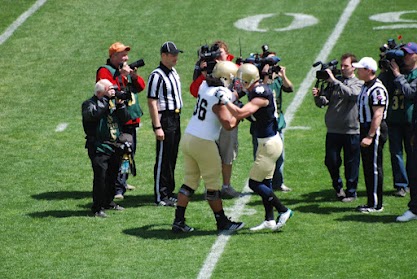 The first snap of the game. Things didn't get much better for Tommy Rees from here. I hate to pile it on the guy, but he really didn't do himself any favors. 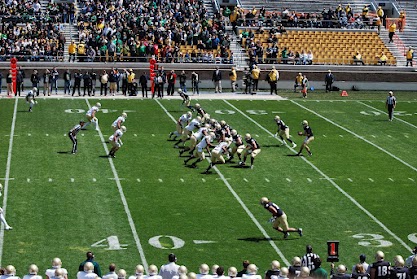 Some of the offense celebrates the first TD from TE. Something tells me this will be the first of many in 2012 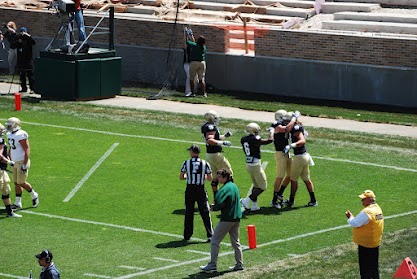 Tuitt was sporting the Justin Tuck inspired face mask. Opposing offenses, you have been warned. 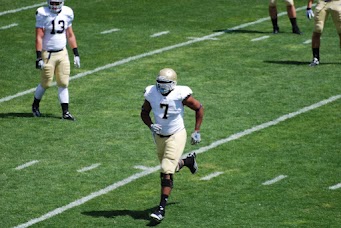 Te'o came off the field after a late-hit personal foul. Not that it had any direct impact, but his day was pretty much done after the flag. 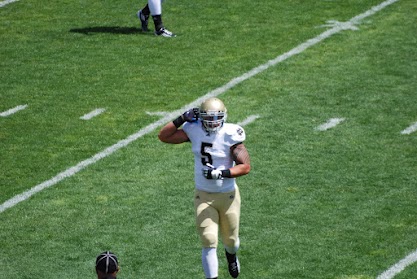 Te'o: Sorry about that hit bro 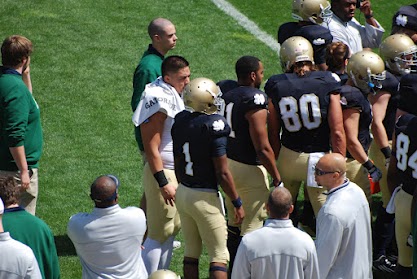 There was a werewolf sighting... 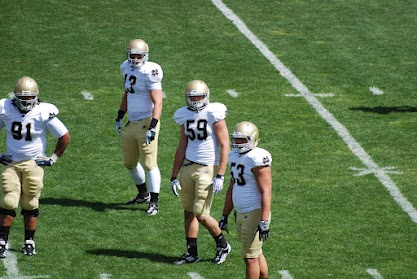 And then another one... 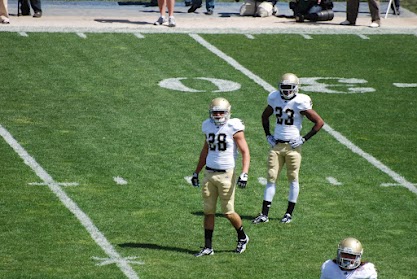 And then they were spotted together on the field, looking to infect others... 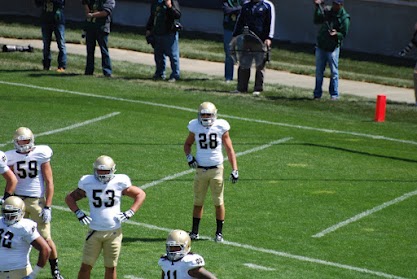 Offense was actually winning this one at half time. Looks like the defense didn't need to burn any TOs. 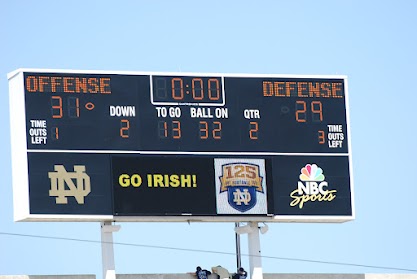 There was a rugby exhibition at halftime, featuring former RB James Aldridge. The harumphers were not pleased at this at all, as rugby is not included among the traditions of Notre Dame Stadium. 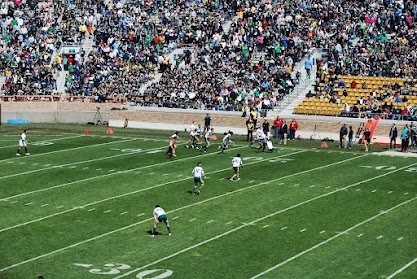 Amir Carlisle rejoined the team after halftime. Let's hope that leg heals up nicely. Some have been wondering how he will fit into the offense with the Wood/Riddick/GAIII show. I guess we will have to wait until September to find out for sure. Also, it appears that he will be getting a different number. 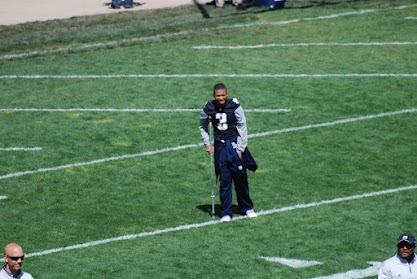 Troy Niklas with Tony Springmann and Chase Hounshell. They are also large human beings. We saw Hercules after the game signing a few autographs for little girls. To bad we couldn't talk Burger into getting into line for a photo op. 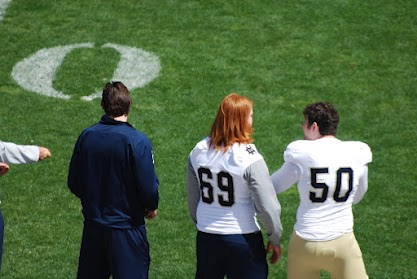 Gunner Kiel made his appearance in the second half. He showed some flashes, but threw to mostly walk-ons. The kid has a huge upside and turned heads with his speed and toughness running the ball. If it were me, I would have just turned around and given the ball to #4 all afternoon. 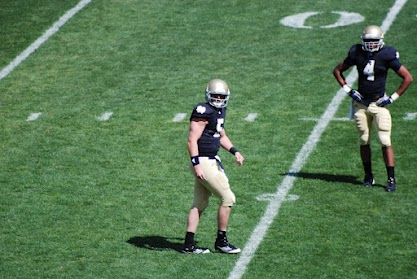 Final snap of the B-G Game. 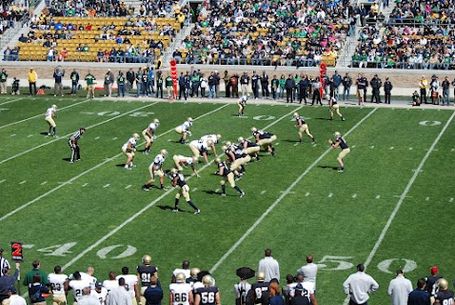 After the game a scrum broke out...oh, wait--that was the halftime rugby exhibition. 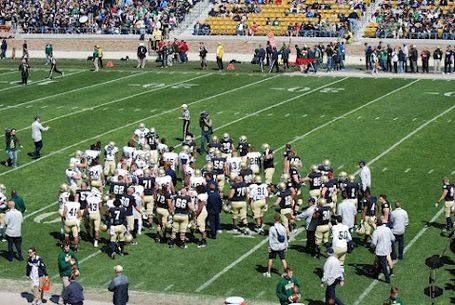 All in all, the game was a success (team got some good work in, no serious injuries) and the crowd enjoyed a sunny spring afternoon in Indiana. I took a lot more photos (which can be seen here). Don't judge me for taking too many of the same player--it was hard to keep track of those already photographed.