1. Jack Swarbrick has decided to remove the yellow mums running along the sidelines inside Notre Dame Stadium, and he would like to replace them with another flower/plant. What do you choose, or can you persuade him to put something else altogether in there?

One word for you, Mr. Swarbrick: cornhole.

Fighting Irish fan, are you looking for an upgrade in your Notre Dame Stadium experience? Do you tire of standing and cheering after the thrill of the opening kick-off? Do you grow bored during all those breaks in the action - half time, commercial time-outs, real time-outs, official reviews, pre-snap reads, extra points, punt returns, first downs, second downs, running plays not involving fullbacks? Are you tired of watching the yellow mums grow?

Then 2012 is your year. This season, Notre Dame Stadium introduces the Fighting Irish CorNDhole BowlTM, a cornhole tournament run simultaneously with and literally right alongside your Fighting Irish home football games.

The yellow mums running along both sides of the field will be replaced by the latest generation FieldTurf® (for peak participant performance) and four classic blue and gold cornhole target boards. Participants (chosen by lottery) will compete throughout the football game, giving those stadium guests who don't actually really like football all that much a reason to stay on the edge of their seats. 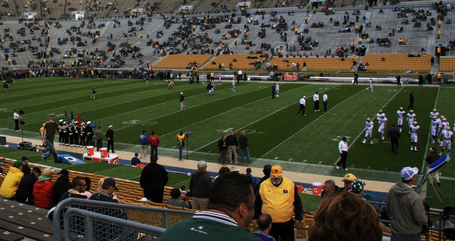 A participant warms up before the game(s). The excitement increases when QB Andrew Hendrix "throws the ball away" right in the direction of CorNDhole BowlTM participants at speeds of up to 75 mph!

All participants will take home an authentic cornhole bag made from part of a game-worn Adidas® Techfit jersey and filled with certified dried Indiana corn rolled in 24-carat gold dust from the golden dome. The tournament champion will also have the thrilling opportunity to sub in at the position of his or her choosing for the last drive of the football game (helmet and pads not included)!*

*Contingent on us asking Coach Kelly if he's cool with this.

(In all seriousness, I like the yellow mums, but think a switch to green mums might be worth considering.)

2. What is the easiest game on the 2012 schedule? Put another way, which team will Notre Dame defeat by the greatest margin of victory?

There should be a handful of games we could look to here: Navy, Purdue, Miami, Pittsburgh, and Boston College are on the short list of plausibly "easy" games in 2012 (may we add Wake Forest?), but as we all saw in 2011, "should" never means "will" in college football. ND slaughtered Navy in 2011, but only after suffering a slaughtering of their own at the Midshipmen's triple-optioning hands in 2010. Our offense struggled mightily (and in ugly fashion) against both Pitt and BC in 2011, but racked up points against outmanned Purdue in 2011 and Miami in the 2010 Sun Bowl (one can only hope that October in Chicago will prove even less hospitable to the ‘Canes than did December in El Paso).

For me, this one comes down to Navy or BC. The Irish should drastically improve their performance over a demoralized BC team, but I'm going with Navy here. After stumbling out of the gate, Kelly's Irish have proven their ability to dominate the academies in their last 3 matches (Army 2010, Navy 2011, Air Force 2011), and despite the opening-day inexperience at quarterback, I think that the Irish will come out ready to play in Dublin. Our defense will happily hold the Midshipmen down and our stable of RBs will run all over them in their flashy new cleats. Last year's margin favored the Irish by 42; this year, I think the margin will be a bit smaller, but only a bit.

3. Excluding tight ends and running backs, give me your top 5 pass catchers for 2012. Who ends up with the most receptions?

When we knock the walk-ons out of consideration and account for Luke Massa's torn ACL, the list shortens to eight. My list of the top five pass catchers for 2012 includes Robby Toma, T.J. Jones, Davaris Daniels, John Goodman, and Davonte Neal. Who will pull down more than the others? It will be close, but I'll call this one for Robby Toma out of the slot.

4. If Jimmy Clausen had decided to return for the 2010 season, what do you think the final record would have been? How would this have altered the 2010 and 2011 seasons?

This question is wildly speculative, of course, and so its answer must be also. It is plausible that, had Clausen returned after his extremely efficient 2009 junior campaign, he would have maintained his accuracy and low rate of interceptions, but would also have struggled a bit adjusting to a wholly new offensive system and new coaches. He completed 68% of his passes in 2009 for 12.9 yards per completion and 310.2 yards per game, throwing .3 INTs per game and passing and rushing for 2.6 TDs per game. The 2009 Irish averaged 30 points per game.

If Clausen basically maintained his accuracy and benefitted from an improved O-line and running game (and defense, of course), but struggled a bit to adjust to Kelly's system, I would predict that ND would have finished the 2010 regular season 9-3 instead of 7-5, but would have lost in a more challenging bowl game against a worthy opponent. They would have finished 9-4 instead of 8-5.

Under Clausen, the 2010 Irish would have racked up the same set of wins and added wins over Michigan and Tulsa. The Michigan game is a different story without the injury to Crist and lack of a solid back-up; no injury, and Clausen or Crist march the Irish to victory. A similar injury to Clausen, and Crist performs at least a little better than Rees and Montana, who scored on 0 of 8 possessions in that game. Just one more TD or 2 trips within FG range, and the Irish win. Clausen put up 34 on Michigan in 2009 and he averaged 30 points per game, so topping Michigan's 28 here is not far-fetched.

I think MSU is still a loss. Crist outplayed Clausen's 2009 averages here in total points (31), TDs (4), and passing and rushing yards (369, 8). Clausen would have needed a great game to win this one, and the Irish defense just didn't pull through in this game in 2010.

In 2010, Notre Dame played a powerful Stanford team quite early in their first season with Kelly. Clausen put up 38 on Stanford in 2009, but Stanford put up 37 on the Irish in 2010 and 45 on them in 2009. Clausen would have handled Stanford better than Crist did, but Harbaugh would have pushed harder and pulled out the win regardless.

The Irish would still have taken the loss against Navy with Clausen at the helm. This was a defensive failure. Clausen put up just 21 against Navy in 2009 in 27:41 across 10 possessions, with the final TD coming with just :24 left in the game. Crist and Rees put up 17 against them in 2010 in 24:11 across 10 possessions. I just don't see the Irish offense pulling this one off with Clausen when the defense gives up 35 points and can't get off the field.

Clausen would have taken the win against Tulsa. Rees outplayed Clausen's 2009 averages in TDs (4) and passing yards (334), but his offense wasn't efficient in scoring (they scored on 4 of 15 possessions) and, more importantly, Rees's TOs netted -14 points for the Irish with an INT returned for a TD and another in the endzone. Clausen walks away with this one.

Had Clausen played through a 9-4 2010 season, come 2011, he's gone and Dayne Crist steps in with 2 years left to play and no continuing recovery from a second major knee injury. Rees is still the inexperienced back-up he was until the 2010 Tulsa game. Crist has had more time to learn Kelly's system (20 months instead of 8) and plays better in 2011 than Rees did with fewer TOs, leading to a 10-2 regular season and a thrilling BCS bowl victory in which no interceptions are thrown in the endzone. All wild speculation, of course.

My coping initially takes the form of enjoying other Irish sports - hockey, basketball, lacrosse, baseball - and that certainly takes the sting out for the first few months. Then I resort to re-watching 2011 Irish home games online. Then comes the hungry scouring of news sites and blogs for Irish football stories and the treasured indulgence of spring practice and the Blue-Gold game. Then, deep in the heart of the off-season, comes stuff like this - stuff that puts my pining for fall into words:

All swept with clouds, sky - blue and gray - chills all.

now fills a stadium best known by the fall,

Then - then they'll gather; all will sing that name,

and those who'll spar, bear the off-season's yield:

the young and mighty will then take the field.

But now we must wait out the long months, all -

sharp winds of winter, the spring rains and sun,

the dripping heat of summer, then football:

charge onto the field for old Notre Dame.