Welcome back to the second installment in my Blue-Gold Game reviews.

Here who we’ve looked at so far:

Today we’ll finish off the running game by looking at Cierre Wood and Theo Riddick. Wood didn’t get many touches in the Blue-Gold Game, so it was easier to just combine him with Riddick.

Like last time, this review will focus more on the offensive line. Wood and Riddick are both veteran running backs, so there’s not a lot to critique about their play.

Let’s get right to the plays.

The Irish line up with two tight ends. Ben Koyack motions into the backfield behind Connor Hanratty.

The offense runs power O with Koyack acting as the fullback (harrumph!). Alex Welch blocks down, meaning he blocks the man inside of him. Koyack kicks out Ben Councell and Bruce Heggie pulls from his backside guard spot and acts as the lead blocker. Hanratty and Matt Hegarty have to fill the spot Heggie vacates, so Hegarty cuts off the backside defensive end while Hanratty reaches to block Louis Nix. 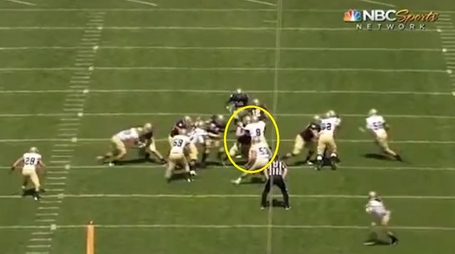 Hanratty (circled) makes an excellent block on the big nose guard. Heggie is still pulling, but Koyack and Welch begin to open a nice hole for Wood. 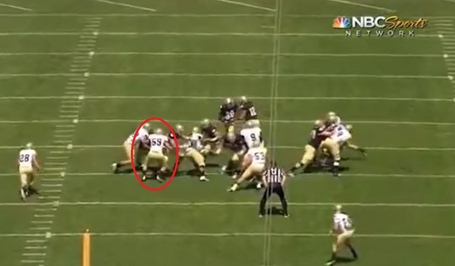 The play is well-defended. Jarrett Grace (circled) reads the play and fills the hole before Heggie can pull around and Austin Collinsworth keeps contain on the outside. However, Justin Utupo is caught in no man’s land. You can see a hole opening up on either side of Nix and Utupo has to choose which lane to fill. 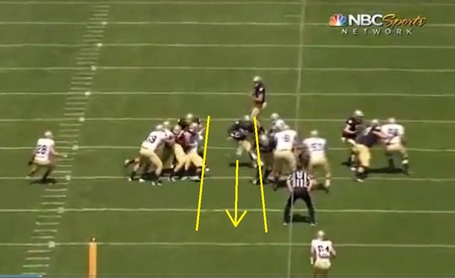 Utupo is in a no-win situation. He goes to Nix’s right and Wood runs through the other hole.

Hanratty’s reach block was the key to this play. If he doesn’t make that block, Wood has nowhere to go.

This play also highlights how hard it is to stop a well-executed power O run. The offense has so many blockers at the point of attack that the defense needs to commit a lot of defenders to stopping it. Notre Dame’s defense does a nice job stopping it, but Wood still rips off a long run.

Let’s see what happens when that key block isn’t made. 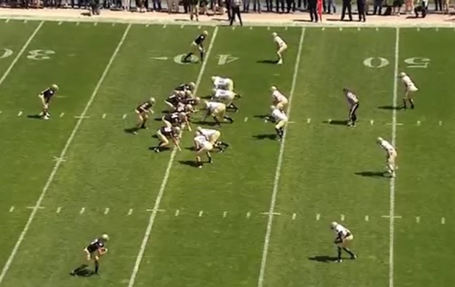 The Irish line up in the same formation but with Theo Riddick in the backfield. 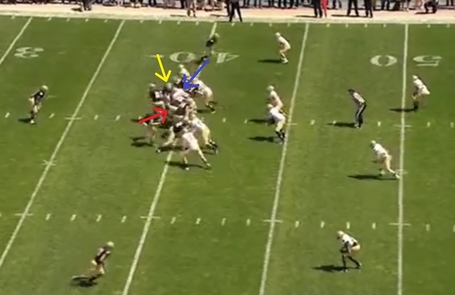 This picture isn’t the clearest, so bear with me. Connor Hanratty (red arrow) tries to make the same reach block on Nix (blue arrow) as Heggie (yellow arrow) pulls around. Hanratty can’t make the same block and Nix actually gets in Heggie’s way. 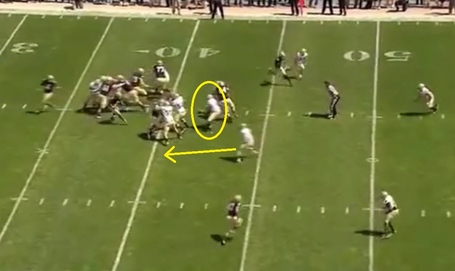 Riddick is able to stay away from Nix and it looks like there are blockers in front of him, but with Heggie out of the way, Kendall Moore is left unblocked. Danny McCarthy keeps contain on the outside. 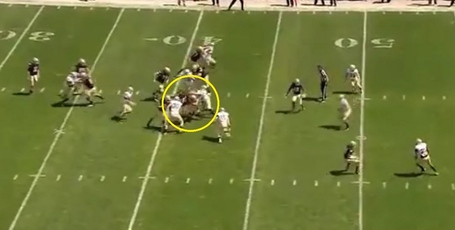 Riddick has nowhere to go and runs right into Moore.

After Hanratty made that great block on Nix in the first play, it was Hanratty’s missed block that blew up this play. As I said before, the power O gives the offense a lot of blockers at the point of attack, but they need to actually make a block for the play to be effective.

The video above combined with the one from last week contains every run by Irish running backs in the Blue-Gold Game. One thing that I found interesting was the lack of variety in the run game. The offense ran only three running plays: power O, inside zone, and outside zone (with and without the read option). Not making an appearance were the counter play, the power play, and the pin-and-pull outside zone, three staples from last season. There was very little pulling from the linemen in the Blue-Gold Game. I’m not saying those plays are gone from the playbook, but it was interesting that they didn’t even show up.

The other difference from what we saw last year is the use of the tight ends. Notre Dame used a lot of two tight end sets early last season, but went away from it when Mike Ragone went down. Just as Kelly promised earlier in the spring, we saw the tight end used as a fullback a number of times, not only in power O but also in the inside/outside zone. We may even see the offense look more like Stanford or Wisconsin and less like Cincinnati as time goes on.