This post is the first in an in-depth look at the Blue-Gold game. Because the spring game is more of a practice than an actual game, it’s a futile exercise to analyze the scheme and play-calling and try to make predictions about next year. So instead, I’m going to look at individual players and break down plays that were particularly brilliant or bone-headed. To begin, we’ll look at a player that amazed most of us with his ability to both run through defenders and also turn the ball over in new and creative ways – George Atkinson III.

This post also marks the introduction of the One Foot Down YouTube channel. I’ll be using it to post videos of the plays I’ll be breaking down in each article, but look out for the others to add their own stuff. I’m sure we’ll be seeing Eric modeling uniforms he developed in his basement and Jim posting grainy videos of recruits he took with his cell phone. Be sure to check us out at OneFootDownND.

GAIII showed Irish fans a lot of gold things in the Blue-Gold Game – speed, power, elusiveness, and patience – but he also showed the ability to make incredibly stupid mistakes. But I think I speak for most fans when I say we’ll tolerate those mistakes as long as he also makes plays like that on a consistent basis.

You may have noticed that I included one play in the video where Atkinson doesn’t touch the ball. That’s because it was the one play where he stayed back in pass protection. Watch him try and engage a lineman and get shoved backwards ten feet. Luckily, one of the offensive linemen bails him out. Pass protection will be something to keep an eye on in the fall. If there’s one thing that could keep Atkinson off the field (besides playing behind Cierre Wood and Theo Riddick), it’s that.

On to the breakdowns. This first play showed great patience and awareness from Atkinson. 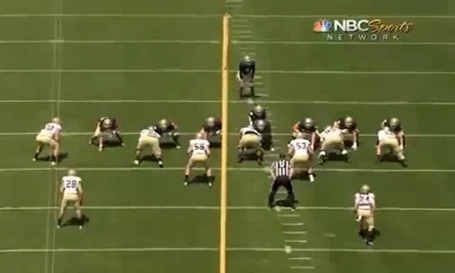 The Irish are lined up with two tight ends and Andrew Hendrix under center. 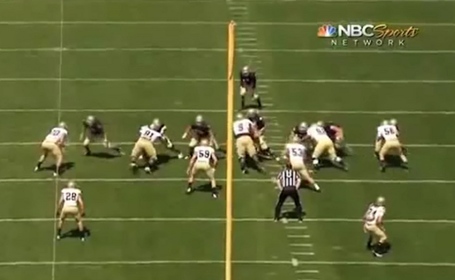 You can see the blocks starting to develop. This is Zone Blocking 101. As the men on the ends of the line, Ben Koyack and Alex Welch block the two outside linebackers, Ben Councell and Anthony Rabasa. Christian Lombard and Mike Golic are "covered" and block the men in front of them. Nick Martin was uncovered, so he immediately moved up to engage with Jarrett Grace, one of the middle linebackers. Both Chris Watt and Zach Martin were partially covered by Tyler Stockton, so they both took him on. Watt quickly disengaged and moved up to the second level to block the other middle linebacker, Justin Utupo. 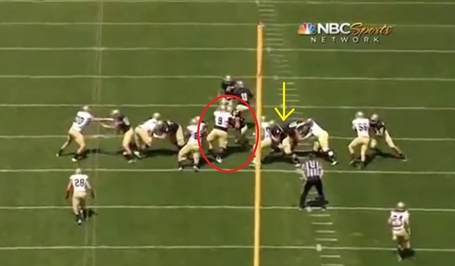 Louis Nix got an angle on Golic and is in Atkinson’s way. This is an inside zone, so Atkinson’s target is the B gap between the right guard and right tackle. Golic isn’t beaten, but Nix has done enough to force a cutback. Luckily, you can see Martin and Watt forging a path for Atkinson. 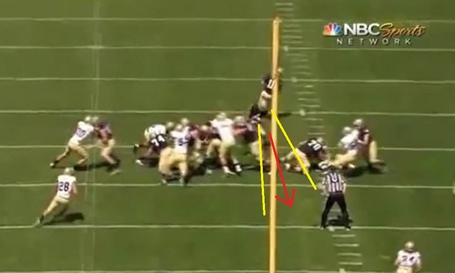 Martin plants Tyler Stockton into the ground and Watt rides Utupo towards the middle of the field. Atkinson makes the cut, reads the hole, and explodes though it.

This is a great job by Atkinson. He could have still tried to run to the right side, but he probably would have either run into Nix’s arms or had to bounce it outside. Instead, he saw the cutback lane open up for him and took it. Watt and Martin basically parted the Red Sea for him, but it’s still nice to see the rising sophomore read the play correctly and not try to force it.

This next play is almost exactly the same as the last one.

The Irish are lined up under center with two tight ends.

Once again, the Irish run an inside zone. And, once again, there is someone right in Atkinson’s way. Atkinson cuts back to his left…

…and drops the ball.

That wasn’t great, but Atkinson showed his vision again on that run. That play was dead once Connor Hanratty let his man by, but GAIII made the right read and probably would have picked up a lot of yards if he hadn’t put the ball on the ground.

One of the good things about talking about a running back is that it let me take a good look at the offensive line. While Atkinson was juking guys out of their shoes and blowing by them down the sideline, the offensive line was opening up big holes.

What really made this last play was this block by Jordan Prestwood: 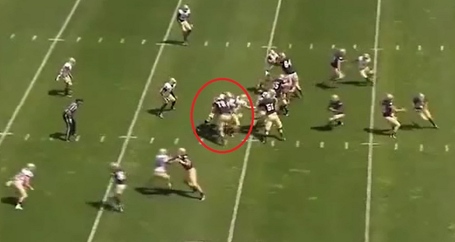 He drives his man backwards and blocks him into another defender, sealing off the edge. Just a fantastic play by the young tackle.

Speaking of great plays by left tackles, here’s one by Zach Martin. 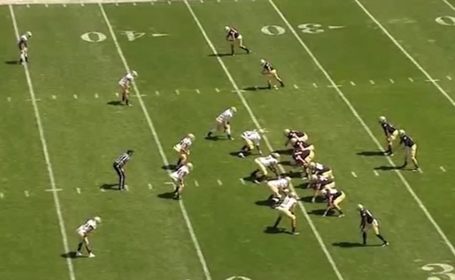 The offense lines up with only one tight end this time. 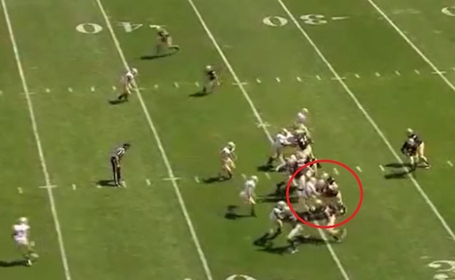 The Irish run an outside zone this time. Martin and Watt were both partially covered, so they both drove their man backwards. 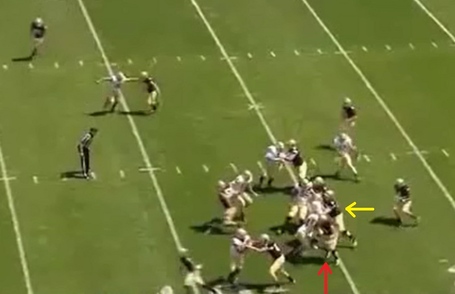 It’s hard to tell from this picture, but Martin (above the red arrow) releases from is man and lets Watt (to the left of the yellow arrow) finish the block. Martin is now parallel to Carlo Calabrese, but facing the other way. 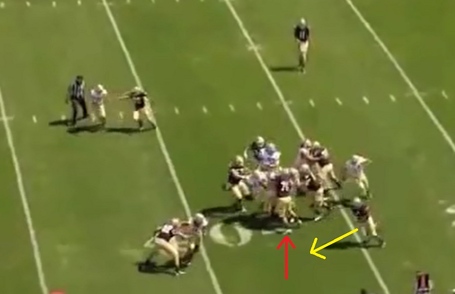 So Martin simply does an about-face and seals off the edge, leaving a big alley for Atkinson to run through. I’m not sure how many tackles in college football can stop on a dime, change directions, and push a charging linebacker backwards.

If you want to see a clinic on how to play offensive line, watch the video again and focus on the left tackle. Both Martin and Prestwood are flawless. Poor Tyler Stockton and Sheldon Day just got abused all day by those two.

It’s crazy to think that Jordan Prestwood is a backup on this team. How many teams on Notre Dame’s schedule would plug a guy like him in at left tackle in a heartbeat?

Hopefully this gives Irish fans some hope for the future, despite the questions at quarterback and wide receiver. We’ll be in good shape if the line can open up holes for Atkinson to run through and force defenders to try and tackle him one-on-one in space. Assuming he holds on to the ball.

Next week we'll look at the other two running backs, Cierre Wood and Theo Riddick. If anyone has a suggestion for a player they want me to look at, leave a comment. And, yes, I will get to the four quarterbacks eventually.

(And part three of The Evolution of the Brian Kelly Offense is coming. I just don't know when.)