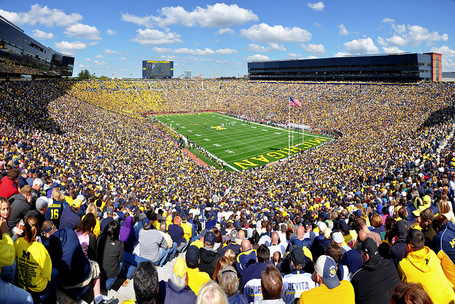 Okay. Well, in continuing this glorious series that whiskeyOFD started with Virginia Tech, I volunteered to do a profile piece on Michigan Stadium.

First, a little background. I’m currently stranded in California, but for a while I lived in the state of Michigan, and I’m very familiar with the Ann Arbor, Kalamazoo, and Detroit areas. I even had the honor of attending a few Michigan games at the Big House—both before and after the stadium renovations. Of course this was probably more because my mom and brother are both pretty hardcore Michigan fans, while my dad is a USC alum.

This is generally my impression of the few visits I had to the Big House.

More after the jump... 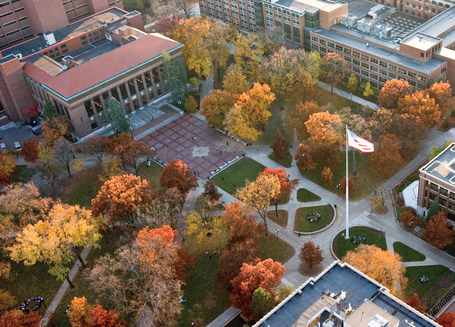 The University of Michigan’s campus is right smack in the middle of Ann Arbor, which is your quintessential college town. Not only does it attract a lot of the country’s best minds, but Ann Arbor is also a frequent target of college movie shoots—such as "The Ides of March," "Conviction" (a Hillary Swank movie), and recently "The Five Year Engagement" with Jason Siegel and Emily Blunt.

Ann Arbor is also very prosperous and well-to-do, which means that you’ll see a lot of snooty, art-student types. Michigan’s business school is one of the best, and I’ve heard that business students in upper classes actually have to start a legitimate business right there in Ann Arbor—which probably explains why the town is Top Five in American Startup Businesses. (Domino’s, Jimmy John’s, and Cottage Inn were all founded in Ann Arbor.) 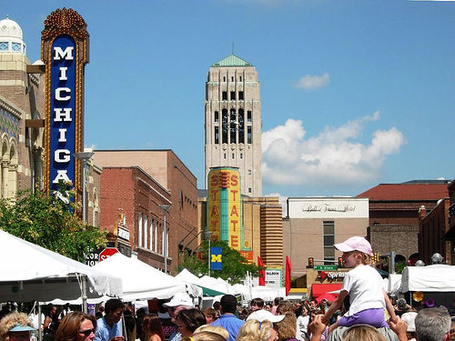 Overall I was pretty impressed with Michigan’s campus. It has an Ivy League feel mixed in with that modern, state-of-the-art design, and they do it really well. There's a great combination of art and science, with spinning cube sculptures and huge glass buildings. The hospital system is top notch and routinely flies around their medical evac helicopter, which is decked out in school colors. 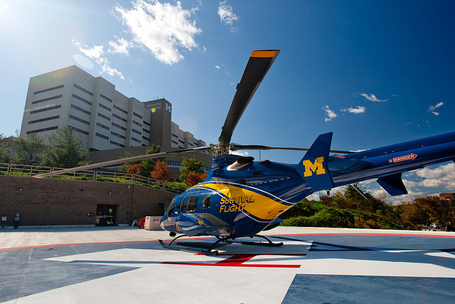 The Tailgate Scene: B+

You’ll probably feel right at home if you like tailgating. Michigan is kind enough to set out parking specifically for visitors, and there’s almost no hostility from Michigan fans. Depending on the game scheduled, there may even be a bouncy castle for kids and some games, although I’m not sure if this is school sponsored or some independent tailgater just completely decked out with the stuff.

One thing that I found interesting is that many tailgaters don’t actually go to the game. They either come and tailgate and then go home, or they watch the game right there in their tailgate with a wireless TV monitor. This is pretty common across the college football world, but it’s surprisingly even more abundant at Michigan.

The Stadium Itself: A

From the outside looking in, Michigan Stadium looked deceptively small before the renovations. Now that they’ve added the expansion structures on the sides, the stadium looks to have a bit more size. 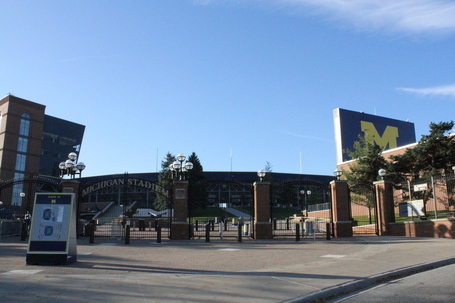 The first thing you’ll notice when you enter the stadium is that the reason it looked so small from the outside is because they built it into the ground instead of on top of it. This gives the stadium a very bowl-like appearance similar to Notre Dame’s. The stadium also looks pretty small when it’s empty, but you don’t really notice the sheer size of it until it’s full. There’s a reason why Brad Nessler called it "the Mecca of College Football." The place has a very intimate feel to it, and anywhere you sit you have a great view of the field. I’m really surprised other stadiums weren’t more like it. 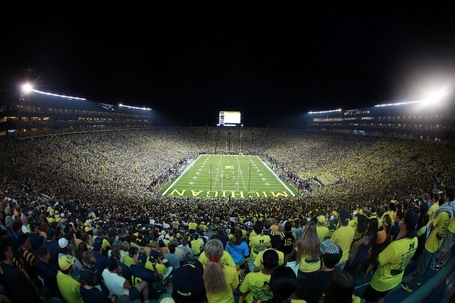 Unless you’re a fan of Hungry Howie’s (the official Pizza sponsor of Michigan Stadium), you probably won’t be all that impressed with the food. It’s your basic college football stadium grub, nothing really gourmet, and while it’s good, it’s rarely worth the price. An average experience gets an average score. 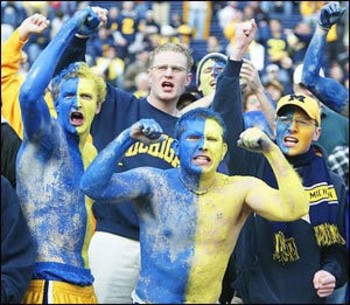 Perhaps it’s because a lot of my family are Michigan fans, but I find Michigan fans in general to be tolerable, respectful, and hospitable. Your typical drunk frat boys are going to be a problem, of course, but other than that, Michigan fans are surprisingly nice people. They don’t even give you a hard time for cheering for your team. I’m sure someone out there has had a bad experience, but I haven’t. Classy bunch, really.

The night game last year was hoppin’, but other games I’ve been to were surprisingly quiet and tame. Michigan has more than 110,000 fans every game and doesn’t really make use of them. The student section cheers their little hearts out, but they get zero help from the rest of the crowd. I suppose this is a good thing for opposing teams. If South Bend is anything like this, you guys are right and I will be severely disappointed.

The band and use of piped-in music: B/B-

Obviously, since I’m not a fan of piped-in music in general, I won’t give glowing remarks here, but Michigan’s band is one of the best in college football. Arguably even as good as ND’s. (You’ll be hard pressed to find a college band that I don't like.) The crowd really gets into Hail to the Victors, which can be plenty intimidating to a visiting fan, but I’m actually a fan of that fight song.

As for the piped-in music, Michigan loves them some Seven Nation Army and really likes to use White Stripes to get the crowd pumped up—to mixed results. I don’t much care for the "dance songs" they did during the breaks. "Don’t Stop Believing" is apparently a fourth quarter favorite, and they’ve adopted the Detroit Red Wing tradition of collectively singing the verse "born and raised in South Detroit." Even though many of the students (and fans, I’m assuming) aren’t necessarily from "The D."

They also utilize Pop Evil's "In the Big House" more frequently than they should: 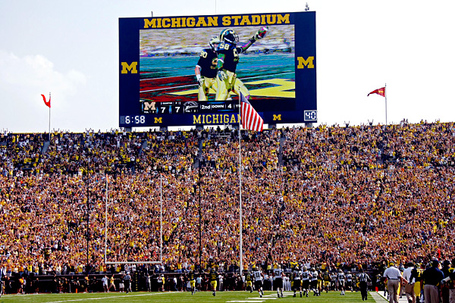 Not a big fan of video boards in general—I find them very distracting from the game itself—but I suppose Michigan does all right. Zero advertisements or commercials from sponsors, which I’m sure the hardcore Michigan fans appreciate. They will feature some hype videos and teasers from Big Ten Network, but it’s all Michigan related. They do sometimes advertise other Michigan sports (hockey, lacrosse, etc.).

Video replays are pretty standard and I didn’t really focus on them too much anyway. Oh, and they love reminding people how many fans were in attendance.

Here's an example of one of the many hype videos they throw on the video board:

What do you guys think?