The Week In News: Knockouts, Junior Day and OFD at the Blue-Gold Game

Share All sharing options for: The Week In News: Knockouts, Junior Day and OFD at the Blue-Gold Game

We had a nice little flood of news coming out of South Bend this week as the Fighting Irish kicked off spring practice. If you stop by here regularly you are already up to speed. If not then we will catch you back up at the bottom of this post.

Despite the flurry of activity in South Bend the rest of the country lacked its typical volume of things that sparked my interest this week. Everyone must be busy with spring practice or something.

As a result I will apply a little extra brevity this week.

Northern Illinois Linebacker Jamaal Bass was indicted this week for knocking down a member of the Toledo marching band while running out onto the field this past season. Bass could get as many as 8 years in prison. Excessive?

More after the jump.

Our buddies over at Coug Center have a post up with Mike Leach talking about spring football practice and damn if it isn't interesting. Leach is definitely a different kind of cat. Just chew on this little tidbit for a minute.

Leach expects to have the offense fully installed within the first four days. Instead of using a playbook, most of the work is done on video, with players watching cut-ups of certain formations and plays all in one nice and tidy package. They're already at work learning the system, and will start putting it into practice right away.

"It's kinda like once you learn the alphabet," Leach said. "You write a lot."

Did everyone see our resident recruiting guru Jim Miesle kicking knowledge on the SBN NCAA page? Very cool, and a great article if you haven't had a chance to read it. Don't forget to utilize the 2013 Recruiting Central widget in our left sidebar either. We will keep that fridge stocked for you all year. 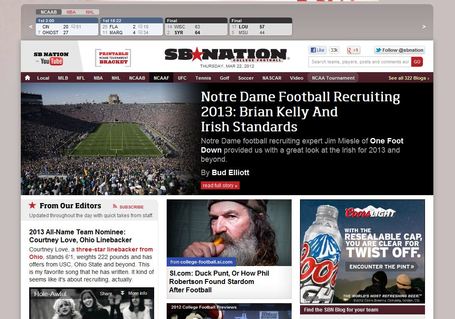 Since the staff was all over it this week we'll do an abbreviated recap of the week that was in South Bend.

Burger primed us with the second installment of his Evolution of the Brian Kelly Offense series, Murtaugh finished up his Spring Storylines series, MotS cut through Brian Kelly's Coachspeak, Murtaugh was all over the first practice, CW pantsed Matt Hayes and Miesle prepped us all for Junior Day tomorrow. So if you missed any of that now is the perfect time to catch up. Who wants to do any work on Friday morning anyway?

Somewhere in there we also discovered that some "Featured Columnist" at Bleacher Report was literally copying and pasting our posts. Pretty sweet. Strangely he and all of his posts disappeared from slideshow world shortly thereafter.

Who is going to the Blue-Gold Game? With the exception of MotS the OFD Crew will be there in force and we hope that you are able to stop by to visit with us a little bit before we head into the stadium for kickoff. MotS will hang back at the house pounding beers, yelling "Goldrix" at the top of his lungs and running our open thread here on the site for the game. So all of you that can't make it will still have a place to hang out.

We are finalizing the details on where we will physically be located outside of the stadium prior to kickoff but we will let you know soon.

Regardless if you see a group of guys sporting these T-Shirts that is most likely us. Miesle will be rocking the Haiku T as that one was his brainchild. We are really looking forward to getting a chance to say hello to all of you in person.

The comment of the week this week is brought to you by OFD regular commenter averagegatsby. He had this to say about the Missouri basketball team in one of our NCAA Tournament open threads.

Is Missouri going to win it all...

Have a great weekend and be sure to stop back by as our coverage of Fighting Irish spring football will be running through the weekend.