The Evolution of the Brian Kelly Offense, Part II: The Dayne Crist Era

Share All sharing options for: The Evolution of the Brian Kelly Offense, Part II: The Dayne Crist Era

One of the main storylines during Brian Kelly’s tenure at Notre Dame has been the offense. Most people expected him to step in, install his offense, and obtain new heights his Cincinnati teams were never able to reach.

Well, obviously that hasn’t happened. The offense has been up and down and we enter Year Three with no quarterback and no real identity on offense. But how did we get here, and where are we going?

In part one of this series, we looked at Kelly’s Cincinnati team and saw how rhythm and tempo are the key to his spread offense. In part two, we’ll look at the 2010 Notre Dame offense with Dayne Crist at the helm.

Anyone who watched Notre Dame play in 2010 knows that the offense didn’t live up to the hype. Dayne Crist, learning a new offensive system, never quite fit in. He was never accurate enough for a spread quarterback. Crist finished the 2010 season completing 59.2% of his passes, while Tony Pike and Zach Collaros combined to complete 65.8% of their passes at Cincinnati in 2009. Those incompletions led to more third and longs and more stalled drives.

But maybe Crist’s biggest problem was in the running game. A quarterback that can punish defenses with his legs opens things up in the passing game, making for easier throws and more completions. It’s not that Crist needed to be Denard Robinson or Cam Newton, but making the defense account for him in the run game could help make up for his lack of accuracy. Tony Pike wasn’t a running quarterback for Kelly in 2009, but he knew the offense up and down and was very accurate. He was good enough that he didn’t need to beat teams with his legs. Crist wasn’t at that level in his first year in the spread and likely would have benefited from better decision-making in the run game.

I already talked a little bit about Crist’s struggles running the ball, but let’s take a look at the Notre Dame/Pitt game from 2010 for some more examples. After getting shut down by Stanford two weeks prior, Brian Kelly vowed to get Crist more involved in the running game.

Pitt, whether by design or because Kelly hadn’t run Crist much since he hurt his throwing eye against Michigan, did not respect Crist’s legs at all in this game. However, Crist wasn’t able to make the Panthers pay. 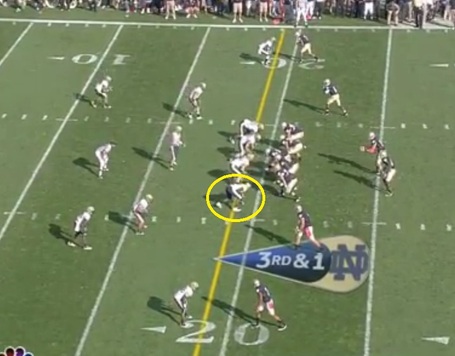 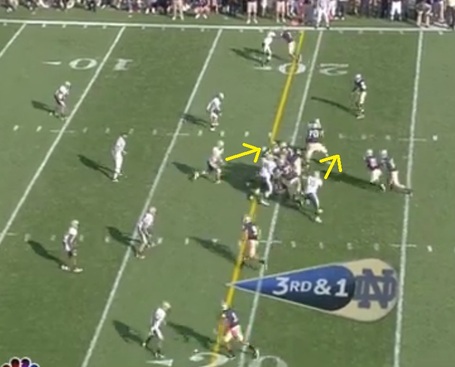 All game on these zone runs, the defensive ends crashed hard on the running back with the middle linebacker attacking the line of scrimmage aggressively.

Here, the defensive end is running almost parallel to the line of scrimmage, but Crist still hands the ball off to Cierre Wood. Wood picks up the first down, but you can see there was plenty of room on the backside.

This next play is a midline option. 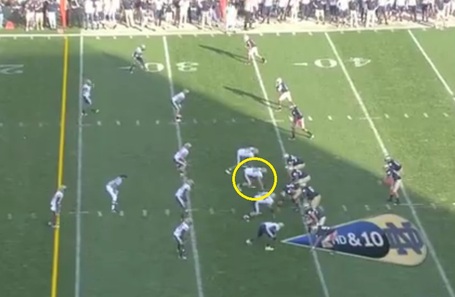 This is similar to the zone read, but the circled defensive tackle is read, as opposed to a defensive end. If the tackle goes for the running back, the quarterback is supposed to pull the ball and run through the space vacated by the tackle. 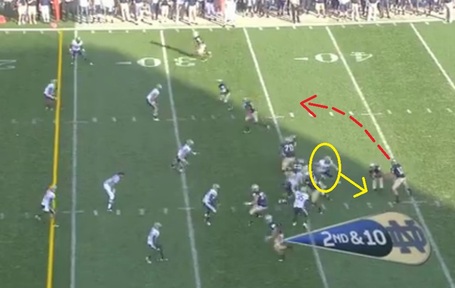 The tackle takes off for Armando Allen, but Crist still hands it off. If Crist had kept it, he would have had two options – run the ball up the middle like the play is designed for, or bounce it outside. Either way, there was plenty of space. Instead, Allen gets dropped for a gain of only one yard.

Those plays were pretty bad, but when Crist actually did run, he was generally pretty effective. 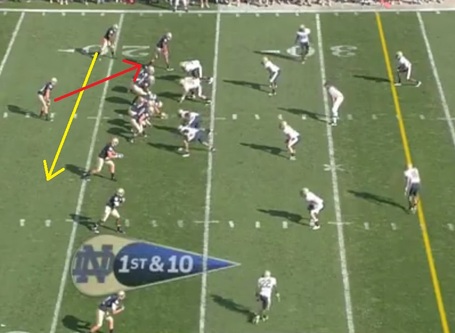 The Irish line up in a five-wide formation. Armando Allen, split out wide, will go in motion before the snap on a fly sweep. Crist will fake the handoff and run the ball the other way. The play happens very fast, so I don’t think there was any kind of read. 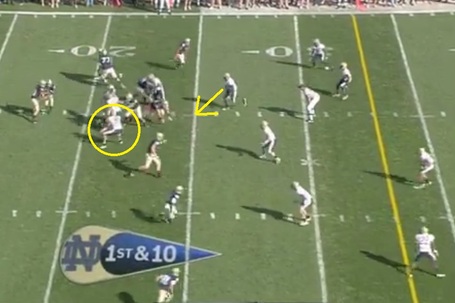 By design, the circled defensive end is left unblocked. He holds, respecting the sweep to Allen. The linebacker, like in the other plays, takes off in the direction of the running back. 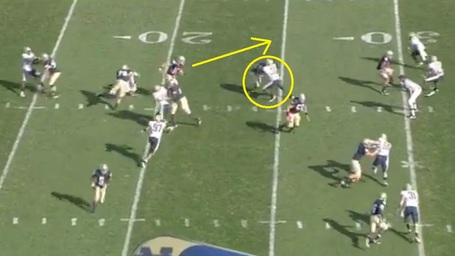 Crist pulls the ball and takes off in other direction. Zach Martin, pulling from his right tackle spot, uncharacteristically misses a key block, and Crist is held to a two yard gain. If Martin gets that block, Crist picks up six or seven yards easily.

This last play shows how this style of offense can punish a defense – if it’s run effectively. 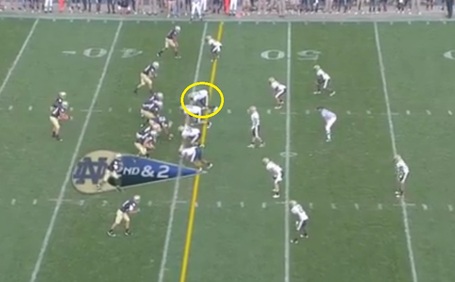 Once again, the Irish are in a four-wide formation and will run the zone read again. The circled defensive end is read. 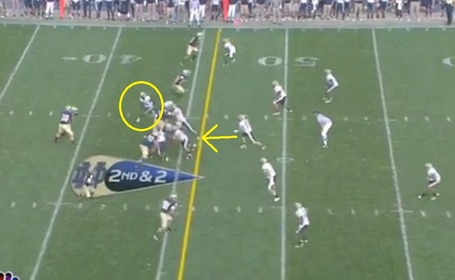 Like before, the end crashes on Allen and the linebacker attacks the line of scrimmage. 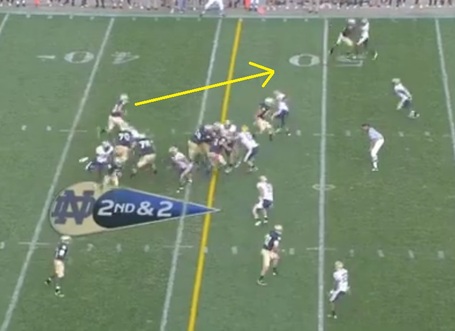 This time, Crist actually pulls the ball and takes it outside. Mike Ragone doesn’t get a very good block on the outside linebacker, but Crist still picks up seven yards because there were no Panthers out there.

Punishing the defense like this is the key to the spread offense. Crist doesn’t need to run the ball 15 times a game, he just needs to make good reads and hold that backside defensive end and that middle linebacker. If they over-pursue, like they were all day in this game, the quarterback needs to take the free yards.

Besides Crist’s inaccuracy, this was one of the major reasons Kelly’s offense never got up to full steam in his first season. Schematically, the offense was very similar to what he did at Cincinnati: the Irish ran at a hurry-up pace, they went no-huddle, and they used most of the same plays and formations. But Dayne was no Tony Pike (in this offense), and needed that added dimension in the running game to keep defenses honest.

What incentive did Pitt have to respect Crist in the read-option game? If they went for the running back on every play, there was basically a 50-50 shot Crist would hand the ball off anyway, giving the defense an advantage. This made it harder to run the ball, and coupled with Crist’s tendency to throw bounce passes, the Irish offense never really had very good rhythm.

So that’s the past of the Notre Dame offense. In part three, we’ll look at the present – the Tommy Rees offense.