Share All sharing options for: Five Wide Fullbacks: Repent, For The Offseason Cometh

The Mouth of The South comes strong into the lane with this week's installation of Five Wide Fullbacks. Topics for discussion include: Notre Dame Draft Picks and You, A Primer on Deceptive Speed; The Evils of College Football Recruiting; The Joys of College Hoops; and Schadenfreude.

Harrison Smith and Michael Floyd owned the Combine this week. Do the Irish notch two First-Round Draft Picks in the same year for the first time since 1994?

No. Notre Dame players are slow.

Haven't you heard? Honestly. Where does this stuff come from? While Golden Tate hasn't exactly set the world on fire, the only concerns that Draft-niks voiced about Tate dealt with his perceived lack of speed. Como what? He only ran by or around everyone he ever played against in college. Fast forward a few years and Draft experts are again questioning the speed of an elite Irish wideout. Forget that speed isn't really Floyd's game. He never, ever had a problem getting open in college. His only problem was finding a quarterback that could find him. Oh, and he ran a 4.42.

And Harrison Smith? His only problem this year was that no one threw in his general direction. And by "general direction," I mean if he was North, they didn't throw it to the North. They pretty much just worked the South, East and Westerly directions instead. If you haven't completely repressed the '09 season-and you should have done so by now, but if you haven't-you may remember a defense that couldn't stop an opposing team from converting 3rd and 17 via a post pattern if it would have prevented the apocalypse. Fast forward to 2011. This Irish defense, led by Mr. Smith, gave up basically nothing over the top and very few explosive plays all season long. This is no small compliment to Harrison Smith.

So will NFL teams draft two Irish players in the First Round for the first time in nearly a decade? No. They're just not smart enough. The NFL that is. Messrs. Floyd and Smith are plenty smart enough. And fast:

The Troy-Niklas-Practicing-With-Irish-Tight-Ends Saga just exploded the interwebs this week. Does the potential move of a potential second-string linebacker to potentially third-string tight end signal that we are fully in the throes of the offseason doldrums? How does this make you feel?

We are indeed steeped in the winter of our discontent-which is every winter, because there's no football after early February, so yeah, it's post-football winter time, though spring has pretty much sprung here in north Texas. While I'm anxious for spring football, I don't want to rush it, because once that's over, there is a long summer of home improvement and oppressive heat to contend with. For now, I'm just glad that National Signing Day is in our rear view. What a spectacle that has become. Grown men picking catfights with teenage boys. Grown men paying teenage boys large sums of money for their lithe young bodies and the services that such bodies can provide. Creepy uncles pimping out their young nephews to the highest bidder. Yuck. I feel like I need to shower and go to confession and shower and go to confession again after NSD. Is it any coincidence that Lent begins so soon after NSD? I don't think so, and I'm giving up college football recruiting for Lent.

What about our readers? What are your Lenten and offseason plans?

The poster-child for everything wrong with recruiting. Yuck.

What have the Irish hoopsters done to dispel said doldrums?

Ah, some good news. The upstart Irish hoopsters. They're sure to dispel my Football Seasonal Affective Disorder. Except that they've just dropped two straight, including a blowout loss to Georgetown. Note to self: basketball ≠ football. A two-game skid, though not good at this point in the season, is not the end of the world in college hoops. We'd like these guys to be riding an 11-game win streak into the NCAA tourney, but maybe these two losses bring them down to earth and make them a little hungrier. They gotsta have that tapeworm, yo. 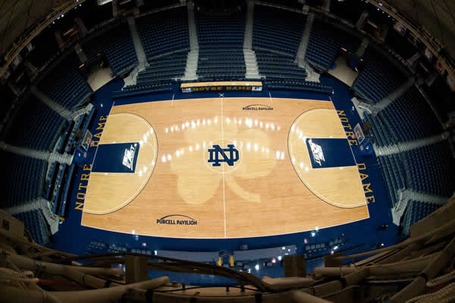 And when four of your starters play 36+ minutes every week, and you only have one guy that gives you any semblance of a presence inside, and you've just rattled off your personal record conference win streak, you done good. Harangody and company didn't do it, nor did Hansbrough et al.

With all of those last-minute wins, the Irish were living on borrowed time. I still think they fully expected to pull it out in the end against St. John's-I know I did-but all those last-second finishes are going to catch up with you. I for one am proud of these li'l rascals. Even if they go one and done in both tourneys, this season is already a pleasant surprise. But still... I think these guys have a little more magic in them.

Providence just beat DePaul and a Calhoun-less UCONN squad. How does this make you feel heading into Friday night's home stand versus the Friars?

Part of me wishes that UCONN would have won without Calhoun, just to deal a blow to Calhoun's unbelievable ego. But that thing is probably as impregnable as Mike Tyson's defense, and it's always good to see UCONN lose, so go ahead and put me down as happy that the UCONN dropped to Providence.

So Irish v. Friars on Friday night. Scott Martin needs to show us something. I don't expect him to score 15, but can he get this team's "mind right"? Will he quarterback this young squad out of its slump and into victory? I say so. I say that this home stand gives the Irish the perfect opportunity to stop the bleeding-is that too dramatic a description for a two-game slide?-and build some confidence before the Big East tourney.

Have the Irish roundballers been exposed in their last two outings? How does their two-game slide bode for their impending trip to Madison Square Garden and hopefully the NCAA tourney?

Let's be honest. Mike Brey's squads are going to struggle against long, athletic teams until Brey upgrades the overall athleticism that he's working with. This is doubly true when the lads aren't shooting well. Fortunately Brey seems to be able to coach his way into the tourney, despite his teams' seemingly perennial athletic shortcomings. Fortunately Brey seems to be bringing in a slightly higher level of talent, and I think that this squad could be very special next year.

As for the remainder of this season, I think that these guys will start to find their shots again tonight. I hope they do, because I'm not overly optimistic about these guys trying to thaw out in the Notre-Dame-Shooters' Graveyard that is the Madison Square Garden. Anyway, it is silly to complain about a potential NCAA tourney berth in a season in which the Irish lost their best player so early on, and in which the prospect of a 15-win season seemed so real in November.