The Evolution of the Brian Kelly Offense, Part I: Cincinnati

Share All sharing options for: The Evolution of the Brian Kelly Offense, Part I:  Cincinnati

Brian Kelly came to Notre Dame with some pretty impressive credentials: 20 years of head coaching experience, two Division II national titles, and two Big East titles at a Cincinnati program that had been an afterthought for much of its history. He came known as an offensive guru, with his Bearcat teams routinely putting up lots of yards and lots of points.

I won’t belabor the point – you all know how the story goes – but the offense hasn’t lived up to the hype in Kelly’s first two seasons. So what’s the difference between those Cincinnati teams and Kelly’s Notre Dame teams? The Irish clearly have more talent than those teams ever had. There was no Michael Floyd or Tyler Eifert or Zach Martin or Cierre Wood at Cincinnati. So how did we get here? This will be the first in a three* part series looking at how Brian Kelly’s offense has evolved from a schematic and philosophical standpoint since coming to Notre Dame.

*Give or take. I haven’t thought that far ahead yet.

So, to begin with, we’ll start with Kelly’s 2009 Cincinnati team, and see how this offense is supposed to be run.

The name of the game with Kelly’s Cincinnati teams was tempo and big plays. You sometimes hear commentators say pass-happy spread offenses (think Houston or Leach-era Texas Tech) use short passes as an extension of the running game. Cincinnati was certainly pass-happy (36 pass attempts per game, 25th in the country, versus 28 rush attempts per game, 116th in the country), but the offense thrived on the big play, averaging 7.0 yards per play, good for second in the country. And they hit those big plays by moving fast at the line of scrimmage and snapping the ball with more than twenty seconds left on the game clock, forcing defenses to become very vanilla and making it easy for Tony Pike to pick them apart.

I’m going to highlight two series of plays from Cincinnati’s game against Pitt to close the 2009 regular season, Kelly’s last game with Cincinnati. The Pitt defense did an excellent job of pressuring Pike and keeping Cincinnati from dictating the tempo. Pike finished the game only 22/44 and threw three interceptions.

It’s very hard for this offense to move when the quarterback is not completing passes. Incompletions and short runs (as opposed to "chunk" plays, as Kelly likes to call them) put the offense in 2nd and long and 3rd and long, and it becomes much harder to move fast because the coaches have to make sure the right play gets called or the drive will end.

The two series of plays in this post will highlight the effect tempo has on this offense and how it put the defense in a bind.

We pick things up in the second quarter, with Cincinnati down 14-7. The Bearcats have just rushed twice for three yards, and face 3rd and 7. 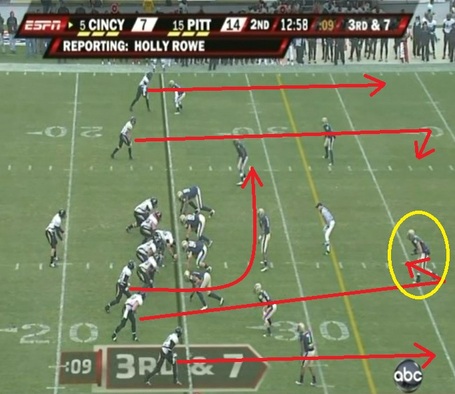 As I mentioned before, 3rd and long is the enemy of the spread offense. As the picture above shows, Cincinnati didn’t snap the ball until the play clock was under ten seconds.

The Bearcats will run four verticalss with a shallow cross underneath. This was a favorite of Kelly’s, because it gave Pike a built in "hot route" versus the blitz. (Chris Brown from Smart Football wrote an excellent post about that concept here.)

Pitt spent most of the game in a basic Cover Two defense, making four verticals an excellent choice. It forces the corners to run deep with the outside receivers and leaves a linebacker on one of the slot receivers. The safeties then have to choose between either helping over the top on the outside receiver or helping the linebacker on the slot receiver. Either way, someone is going to be left in single coverage and then it’s up to him to get open. 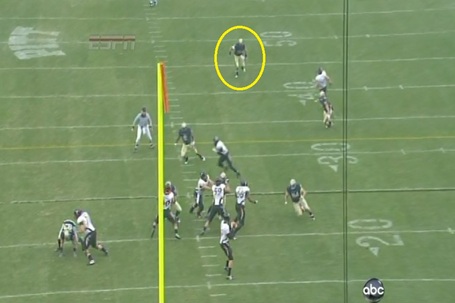 Here, you can see the linebacker passed the slot receiver off to the safety, leaving the outside man one-on-one with the corner. 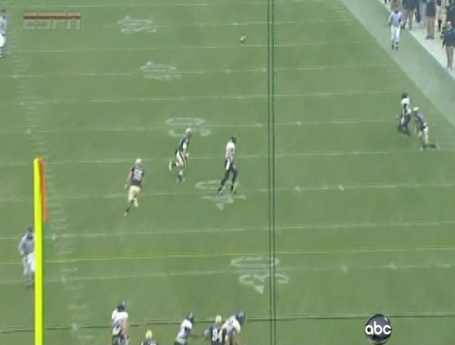 Pike sees this, and throws it up to Armon Binns, who has a step on his man. Binns comes down with it for a gain of 31 yards.

With the offense finally hitting a big play, Pike and Kelly push the tempo. 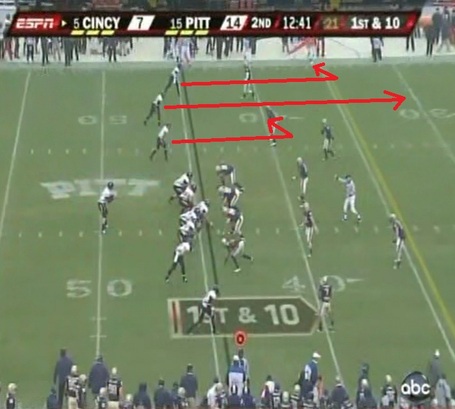 The Bearcats go five wide again, and Pitt shows a basic Cover Two. To Pike’s left, he basically has three defenders on his three receivers. The two outside receivers will run off defenders while the inside receiver will settle into the space they vacated. 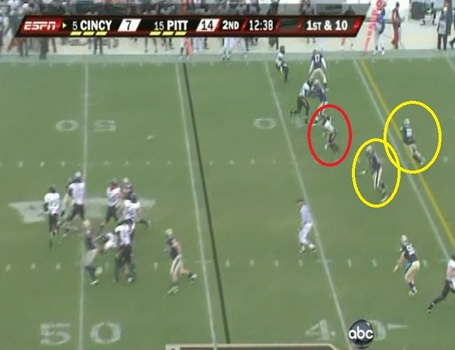 The linebacker widens his zone for some reason – there was no one in that area – and the safety can’t get there fast enough. 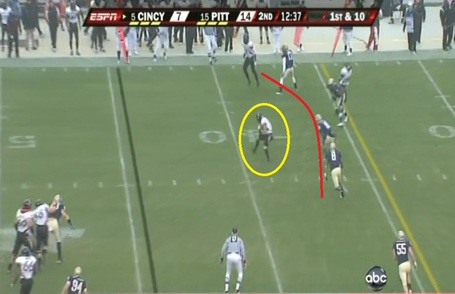 Mardy Giliyard is wide open and the Bearcats pick up eight easy yards. 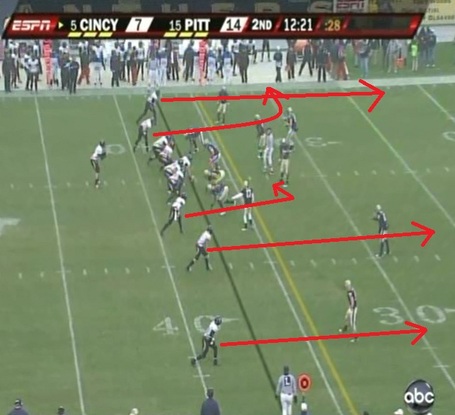 The Bearcats are really moving now. They snap the ball with 27 seconds left on the play clock, with the Pitt defense still standing around pointing out coverages.

Again, the receivers will run vertical routes with the inside receiver to Pike’s right settling in the middle of the field (the hot read). 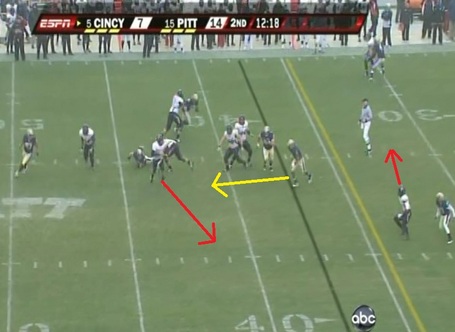 The pass-rush gets to Pike and he’s flushed from the pocket. The linebacker playing a zone in the middle of the field runs down to keep contain. The check down receiver sees this and runs away from his defender in an attempt to get open. 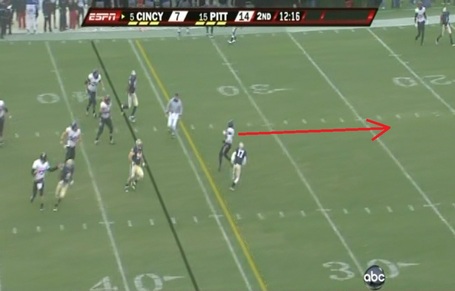 With the other receivers having run their defenders deep, there’s no one in the middle of the field and Cincinnati picks up 18 yards from a busted play.

The drive would eventually stall inside the 10 yard line and Cincinnati would be forced to kick a field goal, but it was the big play on third down and the increase in tempo that allowed Cincinnati to march down the field. The speed of the offense put a lot of pressure on the defense and Pike was able to complete some easy throws.

Let’s fast-forward to the fourth quarter. The Bearcats will run these next plays from basically one formation, but are still able to keep Pittsburgh off balance with some good play-calling from Brian Kelly.

This first play was probably Kelly’s best call, but the execution wasn’t there. 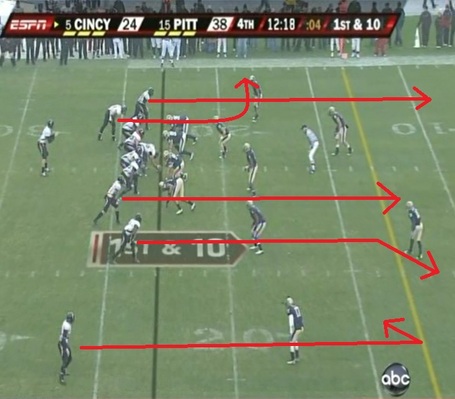 This "tight" formation should look fairly familiar to Irish fans, though I don’t know if Notre Dame ever lined up with an empty backfield.

Kelly calls a "smash" concept with a divide route from the slot receiver.

First, a few words on the smash concept. It’s a combination of two routes: a hitch with a corner over the top. The idea is to create a vertical stretch on the cornerback responsible for covering the flat. If he takes the corner route, the hitch will be open, and vice versa. You might be wondering, what happens if the safety just takes away the corner route? The vertical stretch is gone and both routes are covered.

Both routes are actually pretty decent against one-on-one coverage, and, if the inside receiver can gain leverage on the safety, the corner route should still be open. But another way to attack a Cover Two defense is to add in a "divide" or "seam" route from a trips formation (three receivers to one side). Now, the safety is also stretched – he needs to cover that divide route, but if he does, the corner will be stretched. No matter what, someone will be open. 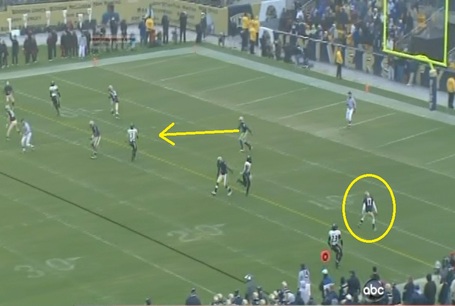 The play works exactly as it was drawn up. The inside receiver runs up the seam and the safety has to follow him. The linebacker passes the receiver running the corner route to the next level, and the circled corner is now stretched. 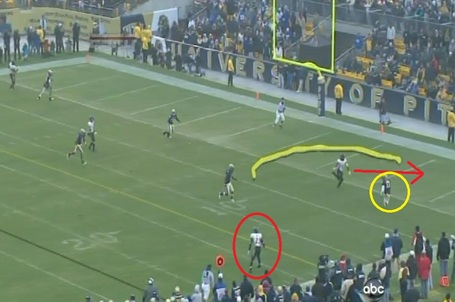 The corner decides to save the touchdown and takes the corner route. The hitch is wide open underneath, but Pike makes a bad read and throws to the corner. The receiver has no leverage and the pass falls incomplete. 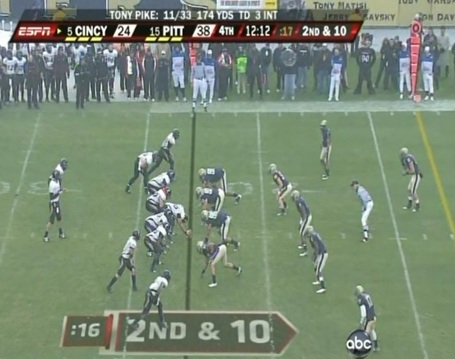 Cincinnati quickly lines back up in the same formation, but with a back in the backfield. 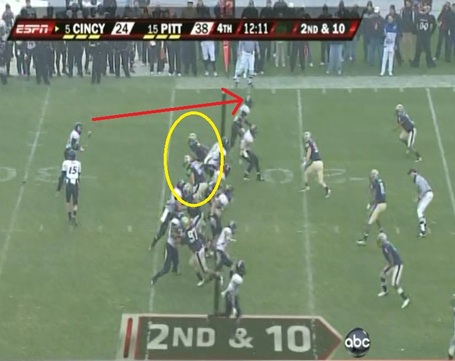 They actually run the ball this time. This is another play Irish fans might recognize. Pike takes the snap and immediately pitches the ball outside. The offensive line leaves the play side defensive end and defensive tackle unblocked. 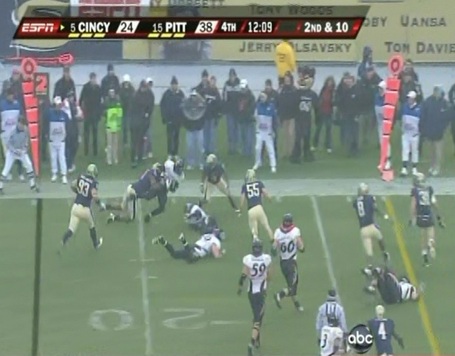 Isaiah Pead outruns them to the outside, picking up five yards, and setting up a manageable third down. 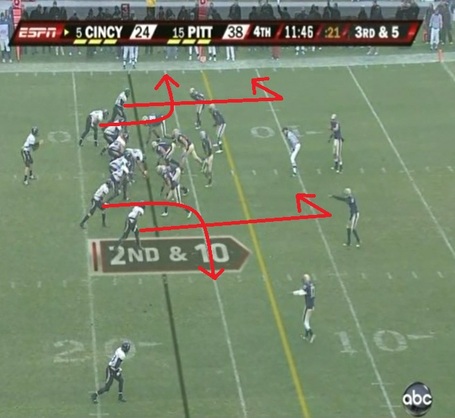 Cincinnati lines up in the same formation as the first play, and Pitt shows the same defense. This is another play that was common for the Irish in 2010. 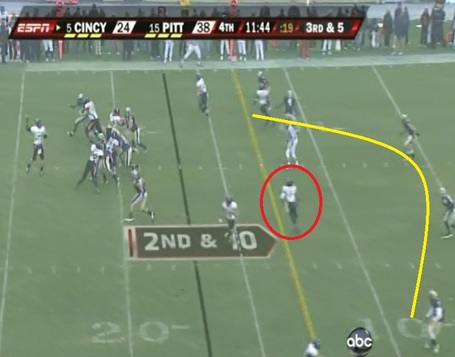 Pitt, expecting more deep routes, bails at the snap. Pike pretty much has his choice of receivers in the middle of the field, and the Bearcats pick up the first down easily. 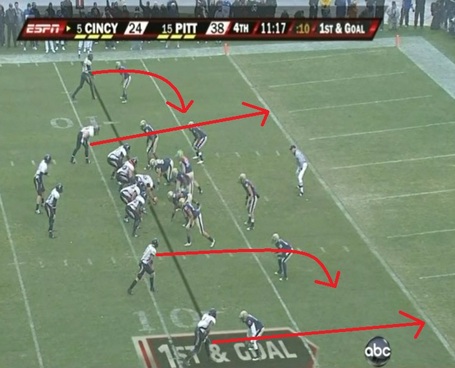 Pike slows things down a bit and changes the play at the line. Pitt shows blitz with no safety help deep. He checks into a play where Gilyard will clear out the defenders by running to the corner of the endzone, and D.J. Woods simply runs an out route behind him. (This play was deadly last season with Michael Floyd and Tyler Eifert lined up to the same side.) 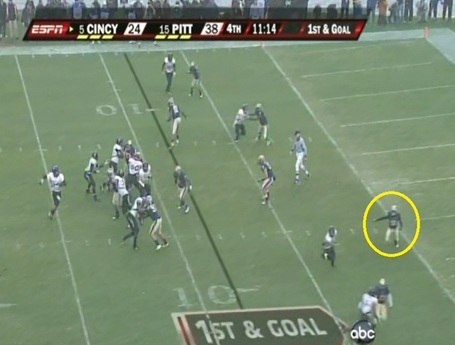 Expecting a route into the endzone, the linebacker covering Woods can’t react fast enough when Woods cuts off his route and he walks in for the touchdown.

So Cincinnati didn’t do anything out of the ordinary on that series of plays. They didn’t even show the defense any different formations. But they stayed out of third and longs, Pike hit his passes (except on the smash), and when Pitt changed up their defense, Pike checked into a play to take advantage of that.

So that’s it for part one. The key takeaways are the importance of rhythm in Brian Kelly’s spread offense. It’s not doing anything outrageously different; it’s just forcing the defense to play into the offense’s hand. It’s not about deception or misdirection (or "gimmicks," as some people like to refer to the spread offense as) but rather about simplifying the game to make it easier for the coach to call plays and the quarterback to make his reads.