The 2012 One Foot Down Football Awards Banquet

Giving out the highest of honors on the internet.

Share All sharing options for: The 2012 One Foot Down Football Awards Banquet

The 2012 Notre Dame Football Awards Banquet is tonight at 8 PM ET. You want watch a live-stream of the banquet HERE provided by UND.com.

That's the official awards show and we'll have a post on the winners on Monday. They don't give out many awards but someone is getting an awesome belt for winning Special Teams Player of the Year: 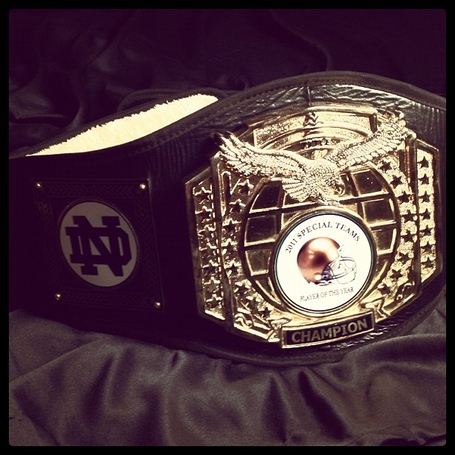 Here at One Foot Down we like to give out our own awards for the football season.

They are prestigious and they are plentiful. Let's honor some football players!

These were voted on by the OFD staff and as a rule we did not give more than one award to a player.

It was a season for the ages. Te'o not only was the best player in the entire country in 2012, but his performance this season moves him into the pantheon of the greatest players to ever play at Notre Dame.

We'll just add another award to his mantle.

It's been a special season for Irish Chocolate as he's anchored the defensive line and made everyone else's life easier---except the opponents.

Despite taking on double teams on a consistent basis Nix has been able to produce 45 tackles, 5.5 tackles for loss, 2 sacks, 5 passes broken up, 3 quarterback hurries, and 1 forced fumble. Those are great numbers for a 2-gap nose guard but they don't even do justice to the full impact he has had on the Irish defense.

Future generations may not be able to look at the box scores and appreciate how important Riddick was to the 2012 offense. He was under 5 yards a carry, didn't reach 1,000 rushing yards, only scored 5 rushing touchdowns, added a respectable 364 receiving yards, but had just 5.8 yards per play overall.

However, Riddick was always there when the offense needed him. He was clutch numerous times in key moments and his 103.7 yards per game led the team by a considerable amount and was the highest mark since Golden Tate's 2009 season.

The true freshman was able to see some action on defense at safety (remember his interception at the goal line against Michigan?) but he also notched 8 tackles on the season---mostly on special teams.

Baratti was able to use his excellent blend of size and speed to race down field and make some tackles, including most recently while chasing down Robert Woods on a punt return.

The return game was arguably much worse than last year but Brindza definitely earned this award anyway.

He attempted the most field goals in the country (31) and he made 23 of them while taking over the placekicking duties after the Navy game. He had clutch kicks in the Purdue, Michigan, Stanford, Pitt, and USC games in addition to a solid season handling the kickoff duties.

The Ross Browner Award (Freshman of the Year)

This was one of the more well-rounded and fundamentally-solid freshman seasons we've seen from an Irish corner in quite some time. It may be enough for K-Hustle to garner some freshman All-American nods.

Russell was 5th on the team in tackles with 50, and also added 2 interceptions, 2 tackles for loss, half a sack, 2 pass breakups, and 1 quarterback hurry, in addition to several clutch tackles in key moments.

Tuitt had a good freshman season a year ago and much was expected from him as a starter in 2012. He likely exceeded most expectations.

He's definitely been overshadowed this season, but Shembo has turned into a great outside linebacker. I was recently looking at a picture from last year and remembered that Darius Fleming played this position last year, and played it well enough, but we needed more.

I know many may be thinking Zeke Motta, but he's won a more prestigious award.

Braxston Cave was a good player during his first 3 years but he never seemed to reach his potential as a dominating center. Granted he had some ups and down this year too, but he was much more consistent and an important part of a dominant running game.

The case could be made that Watt is the most underrated player on the entire team. He's the most physical lineman, rarely makes mistakes, and might have the best pro career out of all the current starting five linemen.

He's also a good representative of the 'mauling spirit' embodied in the play of Aaron Taylor.

How important was Jones this year for the Irish offense? Notre Dame spent plenty of time in 2-receiver sets and he was the only returning starter at his position on the field in most of those situations. Goodman never grabbed a huge role, Toma didn't see the field enough, and Daniels wasn't ready early on and injured late in the season.

Through it all, Jones put together a fine junior season. His stats aren't great but he was about as clutch as anyone on the team and his targets-to-production ratio had to have gone through the roof with the decrease in overall passing this year.

Eifert shows us that national recognition isn't always about stats. Even though he led Notre Dame in catches and yards while tying for the lead in touchdown receptions, his numbers fell considerably from 2011.

However, 19 fewer catches and 150 fewer yards were made up for by improved blocking and his title as the go-to playmaker of an Irish offense that needed him big time.

Wood got to that mark last year with 5.08 as did Jonas Gray with his eye-catching 6.94 YPC. In 2012, Wood finished with regular season with 6.73 and was the most explosive running back on the team.

We may have a winner and difference maker on our hands. Only 5 interceptions on 282 attempts and he slowly became more comfortable running the offense in an efficient manner.

Golson was also able to add 305 rushing yards and 5 touchdowns after taking a while to get comfortable pulling the ball down and using his legs. I can't wait to see how good he is over the next 3 years.

Old Man Kap was a defensive captain along with Manti Te'o and the unsung hero of the defensive line. His tackle numbers are a little low (39) but he set a career high in sacks (6.0) and tackles for loss (8.5) while being one of the more steady gap-controllers on the team.

It's only fitting now that the team is heading into the title game and scouts are taking a closer look at the Irish that KLM is getting a lot more love.

I'd argue the stats don't do Danny Spond justice to what he was able to do with the Dog linebacker position this season. At 248 pounds he was able to successfully drop in coverage and become an asset while shoring up a weak spot in the defense from 2011.

With Spond, Councell, and Jaylon Smith, the Dog position is going to be awfully exciting next year.

From taking bad angles and most fans hoping someone steps up at safety, to the leader and tough tackling spearhead of the Irish secondary.

Few players in recent years have improved more from their junior to senior years than Zeke Motta.

The Ricky Watters Award (Most Swag)

No one displays more quiet confidence on this team than Jackson. He held down a starting corner spot and always stayed calm, cool, and collected in the face of any challenge.

There were a couple other deserving nominees this year but Brown came through with the short dreads and found himself the winner of this award.

The Arnaz Battle Award (Top Play of the Season)

The Julius Jones Award (Top Individual Performance in a Game)

There were a couple other deserving nominees, particularly Theo Riddick's performance against USC, but nothing could match the inspired effort Te'o played with against Michigan State.

Only a few days after losing both his grandmother and girlfriend, Manti would finish with a season-high 12 tackles against the Spartans in a definitive 20-3 win. He also added 2 pass breakups, a fumble recovery, and a tackle for loss.

This was the moment when Te'o arrived on the scene not just as perhaps the game's best player, but one that the rest of college football could admire for his courage and humility.

The Jeff Samardzija Award (Top TD of the Year)

*Golson to Goodman vs. Michigan State

Mike Golic, Jr. and Manti Te'o were recently named Academic All-Americans, but you can't beat these quotes from Turk's Senior Day profile by the Observer:

In addition to devoting time to his on-field improvement as a punter, Turk has worked hard to improve in the classroom. As a finance major in the Mendoza College of Business, he takes as much pride in representing Notre Dame as a student as he does in representing the school as a member of the football team. He is a tour guide for the University, as well as an employee at the Hesburgh Library's circulation desk during the offseason. Turk thoroughly enjoys his classes in finance, and said they are his favorite thing about Notre Dame outside of football.

"I really enjoy learning about different finance topics and I think the classes are great," he said "I actually enjoy going to class, so that's probably my favorite thing outside of football."

As for his post-graduation plans, Turk is exploring a variety of roles in the financial world - while keeping an eye on potential opportunities on the gridiron. He is exploring options in both football and finance.

"I want to go into sales and trading or investment banking," he said. "But I'm still kind of playing out the whole football scenario and worrying about a job after that."

The John Huarte Award (Most Likely to Succeed)

Golic was named an Academic All-American and is clearly more comfortable in front of the camera than anyone else on the team. With his blood, I'm sure we'll be hearing a lot from Mike in the coming years.

The Frank Leahy Award (Senior Most Likely to Coach)

We don't get many glimpses in to the practice world of the Fighting Irish, but when we have Martin has usually been there teaching a younger lineman a thing or two about technique and coverages.

He definitely has the brains and patience to be a coach some day.