Take a break from the coaching carousel to savor Notre Dame's victory over USC a little longer.

Share All sharing options for: USC Film Review: Winning in the Trenches

Notre Dame’s game against USC flipped the script from the past ten years or so. Typically, USC has been the more physical team and pushed Notre Dame around the field. Just going back to the beginning of the Charlie Weis era, here are the rushing totals in the Irish’s games against the Trojans:

Not surprisingly, the only two wins on that list are games were the Irish outrushed the Trojans.

In an era of pass-first spreads and no-huddle offenses, traditional offensive tenets like time of possession and rushing yards have taken a backseat to points, points, and more points.

Sure, points are great and all those yards are flashy, but if Notre Dame fans have learned anything in the past eight years, the old-fashioned recipe for success – running the ball on offense and stopping the run on defense – can still win you a lot of games. There’s a lot of ways to win football games, but controlling the line of scrimmage and holding on to the ball work just fine.

Against the Trojans, the Irish more than doubled USC’s rushing yards and held the ball for nine minutes longer. Check and check.

Notre Dame controlled the line of scrimmage with very nice offensive-line play. They were a little shaky early in the season (Michigan, anyone?) but they seem to be gelling nicely now.

Let’s look at one play that illustrates this point. It’s just a simple inside zone run but the blocking from the offensive line was outstanding. 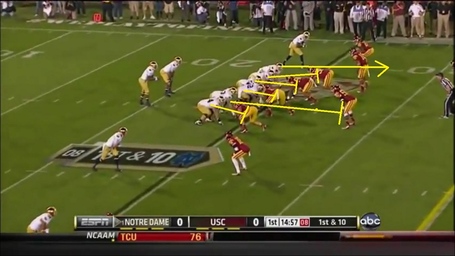 This was the first play of the game. This play is interesting for two reasons. First, this broke one of Kelly’s tendencies. With Eifert and Riddick lined up to the boundary side, this play screamed "speed option" all the way.

Second, the run went to the weak side of the formation. In a zone blocking scheme, gaps are very important. Lining up a tight end to the play side creates another gap the defense has to account for. Lining up two tight ends on the same side creates another gap the defense has to fill. If a running back is patient and has good vision, a gap will open up and the running back will run through it. Running to the weak side limits the number of gaps and puts more pressure on the offensive line. I have a feeling Kelly and the rest of the coaching staff liked their matchup in the running game and wanted to run right at the Trojan defense.

The blocking assignments are pretty typical. Lombard, Cave, Watt, and Martin take the defensive linemen while Golic moves up to take the middle linebacker. Eifert takes off downfield. 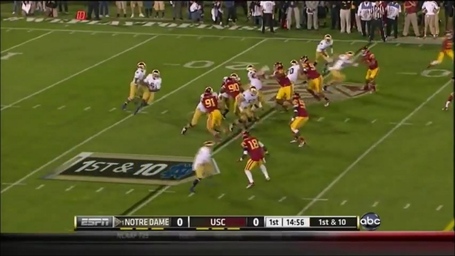 Trojan defensive tackle George Uko (#90) tries to cut outside of Cave, but Cave uses his momentum to push him outside. Leonard Williams (#94) tries to dance a little with Watt and also tries to go to Watt’s right, so he just keeps pushing him in that direction as well. 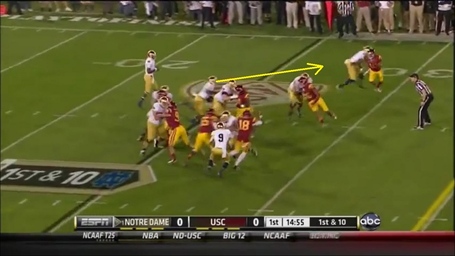 And, oh, look – there’s Zach Martin doing something awesome. He puts Wes Horton on roller skates and blocks him backwards three yards and then decides to show him what the middle of the field looks like. Horton didn’t have any say in the matter.

Riddick didn’t have much of a hole to run through because of Uko, but Cave, Watt, and Martin form a wall on the backside and Riddick cuts back for a gain of 12 yards.

Think about what happened on this play. Notre Dame blocked everyone on the USC line straight up. There were no double teams, no chips, and no lead blockers. They took the fight right to the Trojans and set the tone early by not only winning their matchups on that play, but dominating them.

This isn’t about X’s and O’s and decided schematic advantages; this is just being tough and physical in the trenches. Notre Dame is finally the team punching the opponent in the face on every play.