Welcoming our title opponent and enlightening them on our Fighting Irish.

Share All sharing options for: The Alabama Fan's Guide to Notre Dame

Congratulations on making yet another national title game---is it getting monotonous yet? Yeah, probably not.

We here at One Foot Down wanted to give Crimson Tide fans a helpful guide to this Notre Dame team you'll be competing against in a little over a month from now. Our teams haven't played each other since 1987 and since we haven't exactly been piling up the major bowl appearances lately you probably are a little curious about this 2012 Irish squad.

How did we get to the BCS title game?

Well, we started off our season playing in Dublin, Ireland against Navy and won easily 50-10. Yes, we play Navy every year^ and have done so since 1927. We have a special relationship as they saved our university during WWII and we now give them a prime time game and extra revenue with a neutral site contest when the game isn't in South Bend.

We controlled our home opener against Purdue but let a 10-point lead slip away in the 4th quarter. We fumbled deep in our own territory to set up the game-tying touchdown, but came back and drove down the field for a game-winning field goal. This remains the most puzzling game of the season for us. Yes, we were breaking in a young quarterback and new blocking schemes on the offensive line, and it was a miserable effort against a tough Boilermaker interior. This game also started a theme where Notre Dame just did not play up to its potential in many home games, so you can understand that we're giddy to be playing Alabama at Sun Life Stadium.

We felt much better the next week after choking out then No. 10 Michigan State on the road. That's when we kind of realized we had an emerging defense that was going to kick some butt in 2012. Now that win doesn't look so good with Sparty at 6-6 on the season but we did beat them by 17 points while they lost the rest of their 5 games by a combined 13 points.

A night game at home against Michigan was up next and we finally beat Denard Robinson after he terrorized us the prior two years. You remember playing the Wolverines at Jerry World, I'm sure. We forced 6 turnovers but our young quarterback threw 2 bad interceptions early and got yanked. Our offense went in to a shell protecting a lead and relied on the defense to bring home the 13-6 win.

After a bye week, we demolished Miami 41-3 at our annual neutral site game that we've dubbed the "Shamrock Series." This one was played inside Solider Field, home of the Chicago Bears, and we wore some, umm...different uniforms for the game. 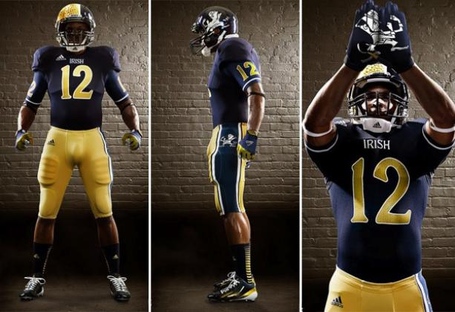 During some bad weather Notre Dame got in to a slug-fest with Stanford, but we pulled it out in overtime. Ah, but there was a controversial ending! Stanford was stopped on 4th down from the 1-yard line to end the game:

Now, even if you wanted to say that Taylor's forward progress wasn't stopped (which the referee ruled) or that his elbow wasn't down before he (inconclusively) lunged the ball across the goal line---keep in mind Stanford needed this to TIE the game. In fact, they needed to convert a PAT in soaked conditions to TIE THE GAME.

Our starting quarterback was injured in the 4th quarter of that Stanford game, so we played another defensive battle against BYU at home the next week. We outgained them by nearly 150 yards but had another close win. We were big underdogs against Oklahoma but went on the road and made a statement with a 30-13 win while the offense began firing on all cylinders with our starting QB back in the lineup and living up to his immense potential.

Everyone likes to talk about our "lucky" win over Pittsburgh the next week and how we "needed" a missed field goal to sneak past the Panthers. What they probably won't bring up is that we out-gained Pitt 522 to 308 despite being -3 in turnovers or that we dominated the game after a sluggish start. And oh yeah, we also had our running back fumble the would-be game winning touchdown in overtime a mere inches from the goal line just before Pitt's missed field goal.

We then went on the road and had a workman-like and boring 21-6 win over Boston College, and then returned home for Senior Day with a 38-0 shutout of Wake Forest. A trip to Los Angeles against USC stood in our way for an undefeated regular season. The Trojans really wanted to spoil our perfect record and started saying that QB Max Wittek and his athleticism would beat Notre Dame. They were like:

And then we were like LOL, we're better and you can't tackle.

That's right, Notre Dame players are finally being developed and getting better---and not just at quarterback and wide receiver!

Head coach Brian Kelly is no longer purple-faced but now calmer than you are. He's a chill bro supremely confident in his player's abilities and the preparation he's given them.

Our defensive coordinator is kind of a big deal. His name is Bob Diaco. 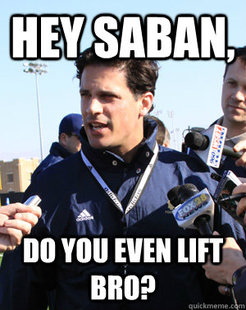 In addition to his manly good looks and perfect hair, he's been known to create werewolves on the defensive side of the ball. Isn't the title game at night? Anyway, a couple teams are trying to steal Bobby D from us before this game and we pray it doesn't happen.

If he leaves, then Kirby Smart has to leave. It's only fair.

What kind of defense do you run?

In fact, you'll notice this Irish defense looks an awful lot like the Alabama defenses you're used to. It's very SEC-y.

We're very big up front and well...we're big everywhere on the field. But with that size comes some speed. Yes, legitimate speed! I'm not sure if ESPN has awarded us SEC speed yet, but I heard the suits in Bristol were very close to doing so in 2012.

What kind of offense do you run?

The simple answer is that Notre Dame runs a pass-first spread offense, except well that really isn't true this season. There's still plenty of shotgun, 4-wide receiver sets and throwing the ball around from time to time and depending on the situation and score, but this year's offense has been built around running the ball.

It's a hybrid spread offense with a ton of power running, mixed in with plenty of option football and running from the quarterback position---yes, it makes Gary Danielson very confused.

There's a lot more runs from under center with 2 or 3 tight ends on the field. A little bit of deep passing built off playaction too. You might see some hurry-up offense as well, mixed with our quarterback running around and doing some improvising on his own.

Players you need to know

He's a redshirt freshman, not very big or experienced but very talented. Don't sleep on him. He's got a cannon arm and may or may not be a super hero. 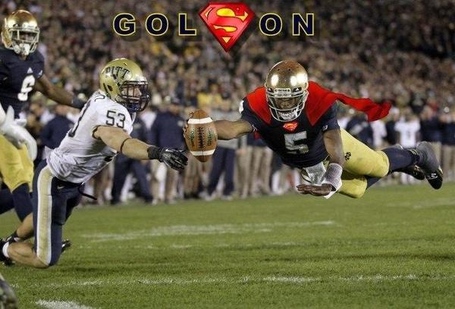 Junior who lost his job to Golson in fall camp. He's played a decent amount due to Golson's early season struggles or injuries. If he's in on January 7th, that's good news for Alabama.

1-2 running back tandem. Riddick is smaller but a more physical runner who sees a ton of time in the backfield or as a slot receiver. Wood is taller and heavier but the team's big-play threat.

All-American who plays all over the place like the New Orleans Saints' Jimmy Graham. He'll catch damn near everything within a 42-foot radius of his body. Shut him down and you're doing good things on defense. Pass interference isn't a bad option sometimes.

Our big All-American War Daddy in the middle of the defensive line. Irish Chocolate versus Barrett Jones is going to be a delightful matchup of tremendous football players.

All-American physical freak who does things with the speed someone 6'6' 305 pounds simply should not be able to do. We're just truly blessed to have him.

True freshman athlete plucked out of the hinterlands of Washington state. Started out on offense but moved to defense after injuries in fall camp, ultimately grabbing a starting corner spot. Way more physical than his listed size, and is not afraid to lay the wood.

You've probably heard of him by now.

He's probably not going to win the Heisman but he's starting to rack up the postseason hardware regardless. Yes, he's better than Jarvis Jones.