When two top-ranked defenses collide, place-kickers often become both teams' best shot at putting points on the board.

With its red zone growing pains, Notre Dame has relied throughout the season on taking the points when its evolving offense has sputtered or been unable to get the ball into the endzone.

When it comes down to it, there's a very good chance that when Notre Dame and Alabama take the field on January 7th, the outcome will hinge on the legs of Kyle Brindza, Jeremy Shelley, and Cade Foster. We best get ourselves ready. 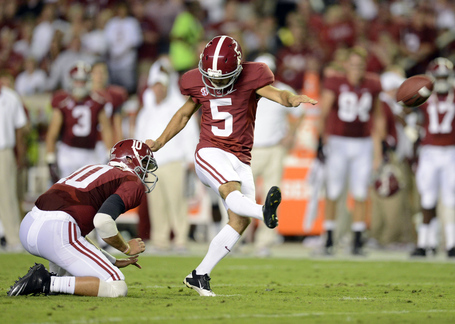 Jeremy Shelley puts one through for Alabama. 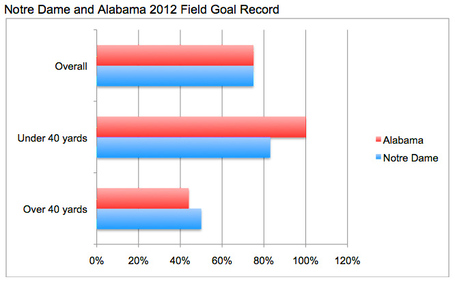 Most recently: In the month of November, Alabama's kickers hit 2 of 3 FG attempts (67%).

Crucial kicks: When trailing, tied, or ahead by a touchdown or less, Bama kickers hit 5 of 7 FG attempts (71%).

Toughest competition: Against Alabama's toughest foes (Georgia, LSU, Texas A&M, and Michigan), Shelley and Foster were 4 for 6 (67%), with Foster hitting just 1 of 3 and Shelley's makes coming from fairly short 22-, 22-, and 28-yard distances.

Jeremy Shelley has made all 11 of his 11 attempted FGs for the Tide (100%) this season. All were from distances between 20 and 38 yards. His attempts came in 7 of Bama's 13 games. He only attempted more than 1 FG in 2 games in 2012. In last year's national championship game vs. LSU, Shelley hit 5 of 7 field goal attempts.

Cade Foster has made 4 of his 9 attempted FGs for the Tide (44%). All were from distances between 46 and 52 yards. His attempts came in 5 of Bama's 13 games. Foster attempted 2 FGs in 3 games and 1 in the SEC championship game. Foster has missed all 3 of his attempted FGs since September (his last was made on 9/22). 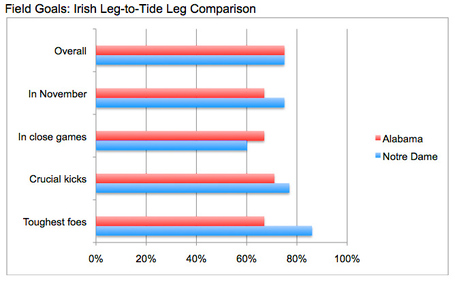 Kyle Brindza, in his first season kicking field goals, has handled them all since Nick Tausch was injured in the first week of the season. Brindza also handles extra points and kick-offs (and has thrown some big blocks this season as well, including a possibly-TD-saving solo one on USC's Marquise Lee).

Crucial kicks: When trailing, tied, ahead by a touchdown or less, or in overtime, Brindza hit 20 of 26 FG attempts (77%).

Toughest competition: Against Notre Dame's toughest foes (Stanford, Oklahoma, Michigan, and USC - 2 away games, 3 in primetime and the 4th in heavy rain), Brindza was 12 for 14 (86%), with one miss in 6 against USC and one miss in 4 against Oklahoma after a low snap and muddled hold. 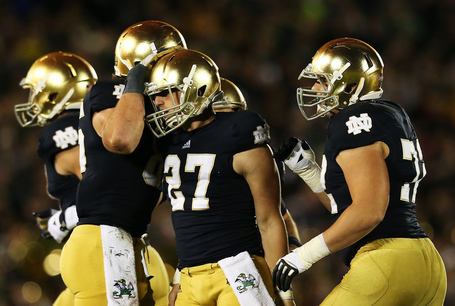 Kyle Brindza walks off the field after gaining three for the Irish.

When it comes down to it, this is an even but complicated match-up. Alabama has the edge on field goals under 40 yards, Notre Dame, over 40 yards. Foster and Shelley have the edge in close games, Brindza, on crucial field goal tries and against his team's toughest opponents. If Shelley trots out onto the field on January 7th to kick from under 40 yards, smart money would bet he makes it - he's made all 11 attempts this season, after all - but he has only had 11 attempts this season. Brindza has had almost 3 times as many shots in 2012, and 4 times as many attempts in the last month of the season.

That added experience, not just for Brindza, but for the whole Fighting Irish kicking unit, may give them an edge if field goals do wind up playing a key role on January 7th, especially if they're called on repeatedly. Shelley may be 11 for 11, and he certainly did well in last year's championship game, but I'll take the kicker who hit 5 of 6 in hostile territory in Notre Dame's high-pressure, primetime, last game of the season. We're all hoping (really, really hoping) for Irish touchdowns, but if they don't come - and if our defense makes the Tide put the game on Shelley's and Foster's legs - we're in pretty fine shape to put the ball through the uprights.