Rolling Out that Gold Carpet: The 2012 ND Football Awards Show

Share All sharing options for: Rolling Out that Gold Carpet: The 2012 ND Football Awards Show

The stage itself was lavishly decked with the many rivalry trophies the Fighting Irish won over the course of the season (love seeing that jeweled shillelagh). Ah, the spoils of victory.

The sold-out event honoring players and recognizing staff was preceded by an hors d'oeuvres-only reception (catered by Ruth's Chris, so that's okay) and silent auction (for what, we wonder?). The event itself, though sponsored by, among others, the luxuriant and exclusive South Bend Airport, generates proceeds through ticket sales for the Notre Dame Club of St. Joseph Valley Scholarship Fund supporting Notre Dame students from the St. Joseph Valley area.

In attendance alongside the coaches, players (missing, most unfortunately, the well-trophied Manti Te'o), their families, staff, and fans were a number of committed recruits plus one interested recruit (RB Greg Bryant). Our own Jim Miesle laid out the list here for you last week. The young visitors from the 2013 Irish Mob included Hunter Bivin, Devin Butler, Will Fuller, Rashad Kinlaw, Jacob Matuska, Mike McGlinchey, Colin McGovern, James Onwualu, Doug Randolph, and Jaylon Smith, plus Mike Heuerman. #IrishMobWeekend, y'all.

Besides the opportunity to look back on a very good year alongside teammates, coaches, and family, one source of obvious enjoyment for the players in this event is the chance to get "swagged out." Gussied up. Fancy. 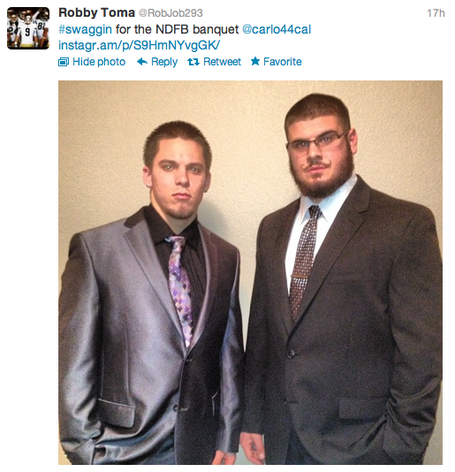 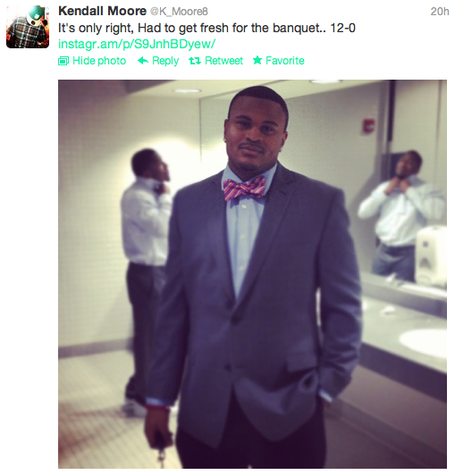 I've got to think that the coaches enjoy this just a little bit, as well, since they spend most of their time with the team demanding their respect in sweatpants and floppy hats. The one time I saw Bob Diaco in actual real life was at now-O'Rourkes (just what it sounds like) after one of these awards ceremonies: he waltzed through the door and up to the bar in his long black overcoat, gold scarf, and leather gloves and ordered something classy. That's how Diaco rolls.

On to the show. The inimitable Jack Nolan, host of UND.com's practice reports and the Brian Kelly Radio Show, was master of ceremonies. First off, the show is no longer called the Notre Dame Awards Show. No, no. It's called "The Echoes." Each award is called an "Echo" and looks like a glass cube (or in some cases, a glass hexagon). Recipients: wake them, don't break them.

After thoughtful opening remarks from university president Father John Jenkins, concluded with a convincing "beat Bama," we were treated to a video showcasing a little strength and conditioning fun and some season highlights. Intermixed with a series of awards and recognitions delivered by assistant (and head) coaches, some pretty well-done videos were shown highlighting each quarter of the season: first the Navy, Purdue, and Michigan State games, then Michigan, Miami, Stanford, then BYU, OU, and Pitt, and finally BC, Wake Forest, and USC.

One of those honored in the midst of the evening was Sam Grewe, a local teen fighting cancer whom the team adopted this season. You can read a bit more about Sam and his role with the team here. 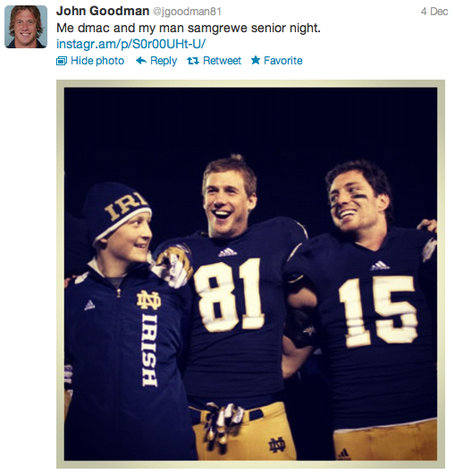 Sam's on the left here, of course.

AD Jack "Savvy" Swarbrick also delivered thoughtful (and witty) remarks late in the evening, including reporting that the priest standing next to him as the Pitt field goal attempt in overtime sailed - just barely - wide right confided that he prayed not for another man to fail, but, well, for the goal posts to move. 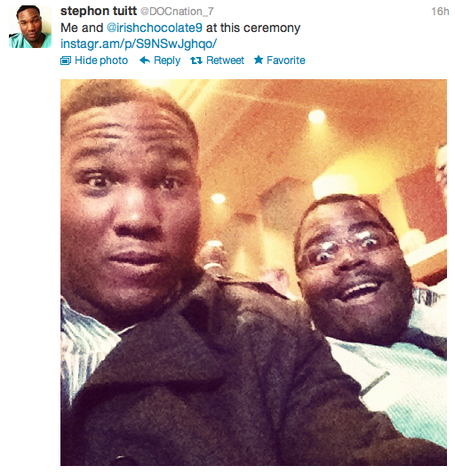 Tyler's comments: "Shoutout to WOPU Nation, offensive line, and my teammates. Thank you."

3. Newcomer of the Year on Offense: Everett Golson

Chuck Martin's comments on the highlight video: "we only showed you their good clips."

4. Newcomer of the Year on Defense: Keivarae Russell

Keivarae's comments: "I'd like to thank my team and my players."

7. Count on Me Award for excellence in unselfishness and dependability: Theo Riddick

Louis's comments: "I would like to thank my mother. She had a beautiful son and he is here today."

13. Rockne Student Athlete Award, with his 3.3 GPA in political science and inspiration and leadership coming back from serious illness this season, according to Coach Bob Elliott: Danny Spond 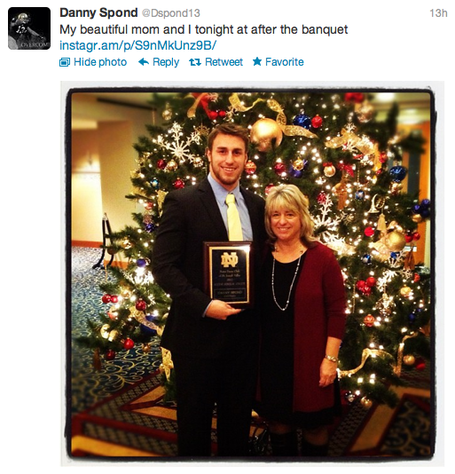 Comments from Manti: "I'm in the middle of New York and the one place I want to be is with my brothers. I'm just trying my best to represent you guys. . . . I love each and every one of you with all my heart."

A hearty congratulations to all the winners. This is an amazing team and an unforgettable season, and it's a joy to take a moment to celebrate that.

We're not finished yet. Now, on to the championship. Go Irish. Beat Alabama.

We leave you with the ever-poignant and excellently produced senior family video.