Giving you all you need to know about this weekend's game against the Eagles.

There was a time when Notre Dame owned this rivalry game going 9-3 against Boston College from 1975 to 2000 in the first 12 games of the series. Then, the Irish dropped 6 straight to the Eagles from 2001 to 2008 leaving many with a bad taste in their mouth.

Since 2009 Notre Dame has ended that losing streak and built their own 3-game winning streak against BC.

Here's the preview of Saturday night's matchup between the Irish and Eagles as Notre Dame looks for 4 straight in the series and 10 straight wins to start the 2012 season.

This is the number of games this season that Boston College has allowed at least 200 yards rushing. They are giving up an average of 246 rushing yards per game (122nd nationally) and only Miami is worse among BCS teams. Notre Dame is averaging 200 yards per game on the ground and if you recall they pounded the Hurricanes into submission with 376 rushing yards.

The number of touchdown passes thrown by Eagle quarterback Chase Rettig. That puts him in a tie for 32nd nationally with the likes of Arkansas' Tyler Wilson, Oklahoma's Landry Jones, and Florida State's E.J. Manuel.

This is the total rushing yards that Boston College has gained against Notre Dame over the past two meetings. The Eagles were held to just 5 rushing yards at home in 2010, and racked up 63 yards last season in South Bend.

That is Notre Dame's record against Boston College when coming in to the game ranked in the AP top 4 or higher. The Eagles wrecked a 8-0 start for Notre Dame back in 2002, and cost the Irish a likely national title in 1993 by upsetting the No. 1 and 10-0 Irish on the last game of the regular season. Both of those upsets occurred in South Bend, so this will be the highest ranked Notre Dame team to ever play a game inside Boston College's Alumni Stadium.

The 5'11" 186 pound true junior is having a breakout season in 2012. Amidon finished last year as a starter in BC's receiving corps and put up 36 receptions, 558 yards, and 3 touchdowns during his first two seasons in Chestnut Hill.

This season he's blowing away those numbers with 67 receptions, 1,073 yards, and 6 touchdowns. In fact, his receiving yardage is the 5th best in the nation right now.

Rettig has been a decent quarterback for the Eagles and he's certainly played better than his team for most of his career. In 2010 he was a true freshman battling with sophomores David Shinskie and Mike Marscovetra and in the fall of last year he won the starting job outright and played the whole season.

KPL was a freshman All-American in 2010 and could claim the award as Boston College's best player. He missed 3 games last year with a hand injury and has missed a couple games already this year. He was probable last week with a leg injury but sat out the game against Wake Forest.

*Nevermind, he's injured and out for this game.

Clancy was brought back for a 5th year in 2012 despite totaling just 42 tackles over his career from 2009-11. This year he's slid into the middle linebacker spot vacated by the machine Luke Kuechly and flourished.

This has been a concern on nearly all Game Day Countdowns this year. Notre Dame has won every game under Brian Kelly when not turning the ball over. They have not been defeated when losing just one turnover either.

Last week the Irish picked up a win despite coughing it up 3 times and not gaining any turnovers in return. Avoid that kind of game against Boston College and an easy win is assured. 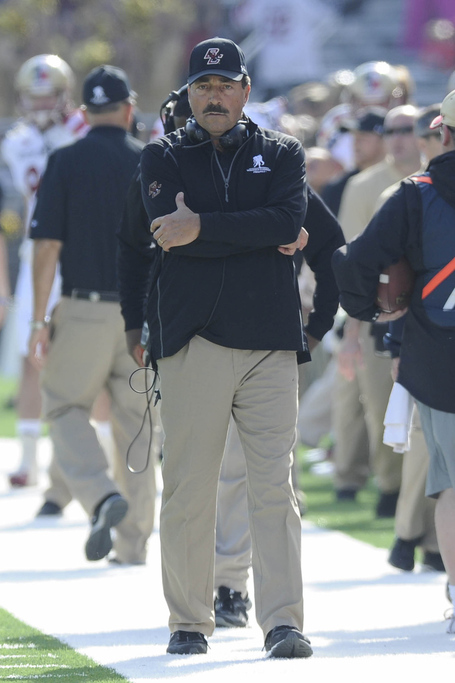 The Need for a Statement Win

There's been talk about having Brian Kelly begin to politic for the national title and try to sway the negative voting that surrounds the Irish. The Irish head coach has said he will not do anything like that but instead will stay focused on his team and getting better.

But like last week, the Irish are playing yet another game where they are going to need to impress voters. That might mean taking some more chances offensively in order to pile up points, but that could also mean more turnovers in the process.

We'll see how much the Irish change their gameplan from previous games. Dragging out 7-minute drives probably isn't going to do much for Notre Dame's resume. They need to win of course, but a 24-3 type of score isn't going to do the Irish any favors, so we'll see if they increase the tempo on offense and try to score a lot of points.

This Notre Dame team is better than the 2002 team, and Boston College is worse. Do the math.

The outlook on Boston College's offensive and defensive lines?

Redshirt sophomore center Andy Gallik (6'3" 305) has plenty of experience with 3 starts and action in 9 games last year, however the Eagles lost starting right guard and redshirt junior Ian White (6'5" 303) to a leg injury, and he is considered the team's best lineman per BC Interruption. He will be replaced by redshirt sophomore Seth Betancourt (6'6" 304).

If experience were the only thing that mattered, then the Eagles would have a good offensive line. However, they've been abysmal in all aspects of running blocking ranking 122nd in rushing yards per game (74.67), 122nd in total rushing yards (672), and 120th in rushing average (2.71).

If that's not bad enough, the BC offensive line has also been poor in protection giving up 21 sacks (86th nationally), and they've also given up 51 tackles for loss (71st nationally).

Per Boston College custom, their linebackers clean up with the tackles so the Eagle line has to be reasonable at eating some blocks. However, the line and the defense as a whole have had major problems getting after the quarterback and being disruptive in the backfield.

BC only has 6 sacks on the season (dead last in the nation), and their 31 tackles for loss is also dead last among BCS teams and ranks 122nd nationally.

As mentioned above, BC has the 2nd worst rush defense among BCS teams. Teams are running the ball on them an average of 47 times per game (t-2nd most nationally), and they're giving up an average of 5.05 yards per carry (105th nationally).

There's really nothing more to say other than that the Irish defensive line has a huge advantage against the Boston College offensive line and the Notre Dame offensive line shouldn't have many problems paving the way for a strong ground game.

This is such a beaten and downtrodden Boston College program right now. They haven't recruited well, nearly every fan wants their coach fired, they have some injuries to key players, and they're about to have the fans of their highly-ranked rival come in and take over their stadium for a game in prime time.

That all sets up for what should be the easiest game of the season for Notre Dame.

Boston College has a decent quarterback but a line that can't protect him. 3 out of their top 4 rushers from last year have either transferred or are injured. The fourth back has mysteriously been in coach Spaziani's dog house and only this week was placed back on the two-deep to back up a true freshman converted safety who will start this weekend on 22 carries and 32 yards for his career.

The Eagles are missing two key contributors on the defensive line, their top receiver from 2011 is also mysteriously suspended, their best linebacker and a promising young corner are injured, while their punter (who knocked an absurd 6 balls inside the Irish 20-yard line last year) has graduated.

It's funny, in a lot of ways Boston College is like a poor man's version of a poor Notre Dame team from the past---at least in terms of perception regarding past unsuccessful Irish teams. With Notre Dame taking off in year 3 of Brian Kelly and the Eagles headed in the opposite direction in year 4 of Frank Spaziani, the disparity between these two schools is as large as its been in 15 or 20 years. 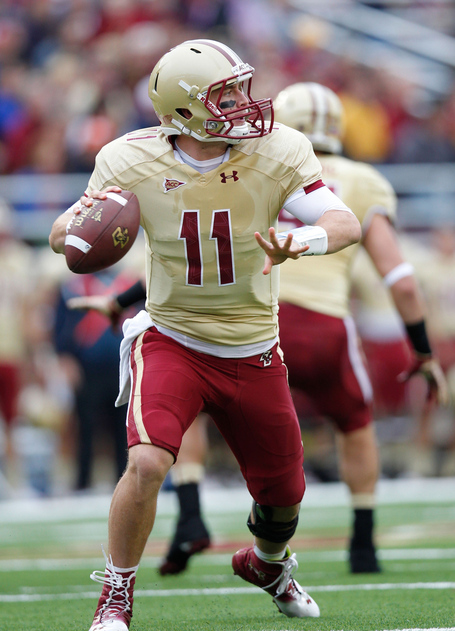 Not much help for Rettig. Greg M. Cooper/US Presswire

Notre Dame's ability to stop the run on defense and in turn run the ball on offense is going to be a major factor all night long. BC was able to bottle up the Irish ground game last year and sit back in the dreaded Drop 8 Rush 4 defense while Tommy Rees stood helpless in the pocket. This year, those early downs will be even more important for the Eagles because Irish quarterback Everett Golson will make them pay with his feet if they sit back and concede so much green grass.

If the Irish are picking up big yards on the ground early this game will get ugly. If BC can hang in there and force the Irish into some prolonged drives that end in field goals (or worse) then they can keep it close.

There's a chance, as Brian Kelly keeps saying in the incessant commercials previewing this game on television, that Boston College 'plays out of their minds' this Saturday.

I doubt it will be enough.

The Eagles missed the last two BCS-bowl bound Irish teams so this is the strongest Notre Dame team they've faced in many, many years. There are plenty of experts predicting a solid blowout and that does seem likely.

After last week's near loss to Pitt on a three-score spread, I promised myself that I wouldn't take Notre Dame again to cover as a favorite in the face of double-digit lines. Vegas certainly has been spooked as this weekend's line has fallen nearly 2 points since Sunday too, which really doesn't make much sense other than the fact that BC played Notre Dame tight last year.

There's just no way the Irish don't cover 18.5 points this weekend though. Notre Dame has steamrolled any team that has a hard time stopping the run and they've also played incredibly well on the road.

I'm staying away from predicting a major blowout, but this should be a comfortable victory.