I had the privilege of attending the University of Notre Dame from the fall of 1991 until the spring of 1995. I lived all four years in Grace Hall. For those of you currently attending The University of Our Lady, that's the big tall office building way out on the north end of campus. Some say it is a full inch taller than the one next to it.

Aside from having functioning air conditioning, one of Grace Hall's claims to fame was the #1 sign that was lit on this campus high-point any time the Fighting Irish football team was ranked #1 in the land. As a freshman in 1991, it was the juniors in our section who told us tales of the magical1988 championship season as they introduced us to the finer points of Busch Light Draft consumption. You could see the sparkle in their eyes as they talked about Tony Rice, Zorich, and the Rocket leading Notre Dame to the promised land.

My freshman and sophomore years were filled with great moments. We were at the Snow Bowl vs. Penn State memorialized in the first Irish Impact poster and we were the crowd for Rudy.

Sadly, those seasons fell short of winning it all, and the departure of Rick Mirer for the NFL didn't leave us a ton of hope for the '93 season - particularly with FSU on the schedule.

However, as that year rolled along, the improbably Irish looked like a team of destiny. The leadership of Kevin McDougal and a lights-out defense filled with NFL talent had the Irish undefeated and #2 heading in to the Game of the Century. FSU was coming to town, and ESPN had this crazy idea of taking College Gameday on the road, and they were going to do a remote broadcast from campus the day of the game. The consensus around the world was that the Irish were a feel-good story, but they would get exposed by the raw speed and talent of the Criminoles. Free Shoes University had Heisman Trophy candidate Charlie Ward and a host of other players set to run ND out of The House That Rockne Built (getting ready for renovations).

There were a few students able to fund a whole lot of fun by scalping those tickets, but my entire group of friends went to the game. Our logic is that a grand for our ticket books sounded like a great deal, but missing that game was inexcusable, so we went. Our faith was rewarded, and when classmate Shawn Wooden knocked down the final pass in the endzone, we stormed the field, and my buddy and I smoked victory cigars on the 25 yd line. It was the kind of thing you never forget.

I believe it was Sunday as we began to sober up and shake off the emotional exhaustion of the night before when we realized we would be #1 in the next polls. A bunch of my friends, all juniors at the time, were hoping to be RA's the following year so we were all in good with the Rector, Assistant Rectors and RA's. They gave us the keys to one of the lower level storage areas, and we went hunting. We weren't going to let the guys who bought us all that crappy beer freshman year down. We found this rickety old set of 2x4's with white christmas lights stapled to them. While there was a big part of us that first thought, "This is it?!?" that feeling was quickly replaced by the pride of what it represented. We found some tools, begged for the key to the roof, and assembled the sign.

While this was going on, our dorm's student government rep got in touch with the football offices to say we'd like to have a pep rally for an official lighting Monday night (the polls didn't come out until Monday in those dark pre-Internet, pre-smartphone days). We almost lost it Monday morning when we found out that Lou himself would attend and speak to the crowd.

As plans were coming together for Monday night, we quickly realized there wasn't any sort of switch for the light, so someone was going to have to be up there to plug it in at the big moment. I wish I could tell you that I volunteered for that distinction. The truth is, I kinda inherited it because everyone else, wisely, wanted to be down in the crowd for the big moment. So I got the key to the roof and that night, I waited until I faintly heard Coach Holtz announce, "Your #1 ranked Fighting Irish" (or something like that), and I plugged the sign in on cue. Sitting 12 stories up, hearing the campus roar like that was such a rush. Incredible.

The University of Notre Dame had the top-ranked football team in the land, and we lit up the South Bend sky to remind everyone and ourselves: 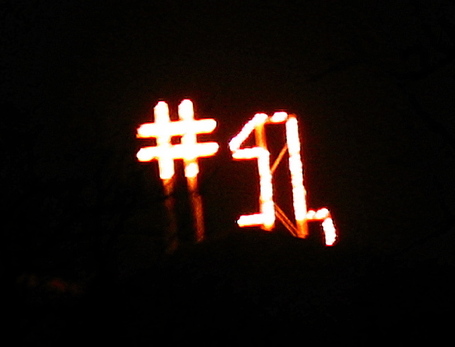 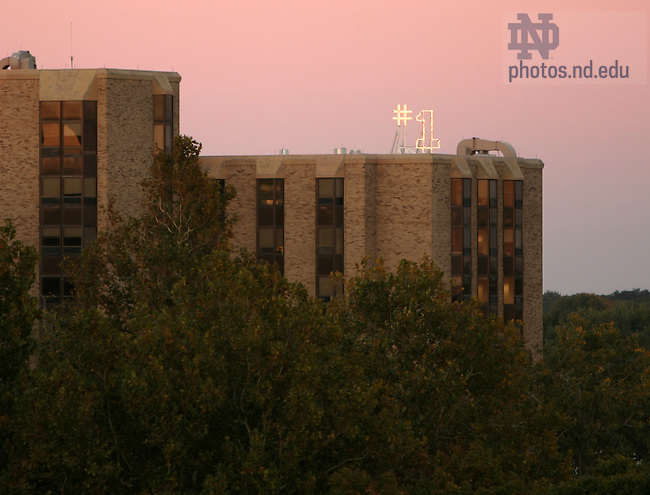 Having that sign lit for the following week was a source of great pride for the entire campus, and particularly, the men of Grace Hall. I understand that since then, it has been used for a few other sports, and I guess I understand the sentiment, but for the classes before that #1 sign was reserved to signify a singular thing - football supremacy. For me, the best part of the whole thing will always be how it wasn't some big, staged, university bureaucracy that got the thing lit. It was a couple of guys trying to honor the Juniors that were so good to us our Freshman year at ND.

If it happened today, there would be a thousand YouTube and Instagram memories to share as it happened. Sadly, that wasn't the case in 1993. Let's hope this 2012 team gets their chance to light the sky for us all to see.