After an ugly first three quarters, Notre Dame woke up and won a thriller over Pitt in triple overtime.

Share All sharing options for: Pitt Review: Surviving Triple OT to Move to 9-0

Fresh off a replay of this 4 hour and 18 minute marathon of a game, a full One Foot Down review is here to start off your Monday morning.

This is one of those games where re-watching things made me feel a lot better about the Irish. Instead of feeling "why aren't we up by a couple touchdowns already" it was a lot easier to say "this wasn't as bad as it felt watching it live."

Another strong game from the D-line although it won't go down as one of their dominating performances. That's mostly because the game went into overtime and Pitt's running back had 172 yards on the ground. Still, Graham picked up 103 of those yards on two runs---both of which had terrible run support by Notre Dame safeties.

On the vast majority of snaps, the defensive line was playing very well. Outside of those two long runs Graham was held to 3.1 yards per carry. Even more impressive, the Irish either notched a sack or a quarterback hurry on 46.5% of Pitt's pass attempts.

Stephon Tuitt grabbed 1.5 sacks, Big Lou added half a sack, while Kapron Lewis-Moore grabbed 1.5 sacks. Had the defense cleaned up one of those long plays and the team won by 15 to 20 points, this effort by the line would be viewed a little differently.

Pitt was getting to the second level and disrupting the tackling ability of the Irish linebackers, but that's on the defensive line as much as it is the good play-calling from the Panthers coaching staff. Still, the Notre Dame 'backers were able to make some plays and finish with a good overall game.

Dan Fox played well and has definitely improved his speed and instincts. He's making it hard for the coach's not to give him a 5th year next season as he led the defense with 9 tackles. Carlo Calabrese also made a patented Carlo Calabrese play near the end of the 1st half by filling a hole and stuffing Pitt on 4th and 1.

Danny Spond made a nice play in the backfield to trip up a running back but he played so-so the rest of the game. He took a really bad angle on the long Graham run on Pitt's first play from scrimmage.

Prince Shembo had a very strong game with 8 tackles, 2 for loss, 1 sack, 2 quarterback hurries, and 1 behind-the-back arms flailing pass break-up. Positive signs from Ishaq Williams who is playing more active and getting his nose dirty. The Brooklyn native finished with 1 nice tackle for loss (on the play where he drove Graham out of bounds but the refs thought 'let's start the clock and make ND burn a timeout') and a quarterback hurry.

A bit of a quiet game for Manti Te'o but he finished with 7 tackles, 1 for loss, half a sack, and one pass break-up. Still, Pitt was doing a good job blocking him at the next level and this was a step back for the Te'o Heisman campaign. His stat line wasn't terrible, but we've come to expect more from him.

A bit of a rough game for Mathias Farley who had a plate and pins inserted into his hand last week. Playing with a cast, he missed a tackle on the long Graham run to start the game and then couldn't wrap up on Graham's lone touchdown of the game.

Notre Dame needed a little more from Zeke Motta in this game---just 3 tackles and he was turned around badly after a nice jump-cut by Ray Graham for a 48-yard rush. 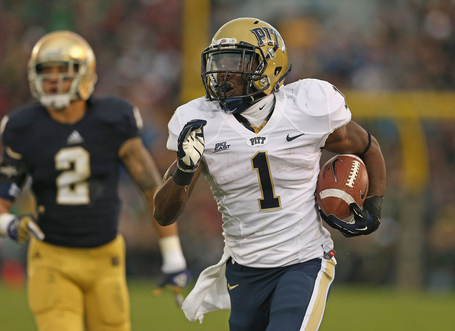 Solid game by Bennett Jackson with 6 tackles, 1 pass break-up, and a beautiful half tackle for loss near the Irish goal line.

KeiVarae Russelll continues to impress even with an early pass-interference penalty. He chased down two long plays by Pitt and is as sure of a tackler as anyone on the roster.

A decent but not great performance by the Irish offensive line. As usual, Mike Golic was abused on a handful of plays and the communication in zone blocking is still sketchy at times as two players let a defender sneak between them on occasion.

For the most part the protection was pretty good though. Pitt forced Golson and Rees into a few hurried throws (officially 9 QBH's, which yeah kinda stinks) but the line paved the way for 161 yards at 4.1 yards per rush by Irish running backs and 231 yards rushing overall.

It was a strong game by Tyler Eifert who appears to be gaining a stronger sense of communication with Golson. TE snatched 6 catches for 62 yards but even better he picked up 4 first downs on those catches and that doesn't include 2 more first downs gained through pass interference calls.*

*Yeah the last one was a bad call but Pitt fans are acting like there was a minute left in the game. There were just under 14 minutes left to go and the Panther offense did squat the rest of the way. Tough break for sure but not some back-breaking call in crunch time.

Eifert should have caught a deep touchdown pass from Golson to start the 4th quarter which bounced right off his front shoulder though---that really could have swung the momentum a lot earlier than what eventually happened.

Troy Niklas is still getting a lot of playing time but it seems like the offense has moved away from multiple tight end sets, especially 3-tight end sets, and Ben Koyack's playing time has decreased. That's probably a product of Golson becoming more comfortable as a passer more than anything.

Hopefully this is the game we can look back on as a turning point for DaVaris Daniels because it was the best of his young career. A team-high 7 catches, including a deep 45-yard reception, and numerous tough yards after taking the ball.

Robby Toma (6 for 50 yards) and TJ Jones (5 for 53) turned in tough performances as well, especially Jones who looked very shifty and physical on a couple screens.

I also like that Daniel Smith is getting more playing time and is getting some balls thrown his way. He finished with just 1 catch but he's pretty good as a blocker and owned a couple Pitt DB's on a few plays. 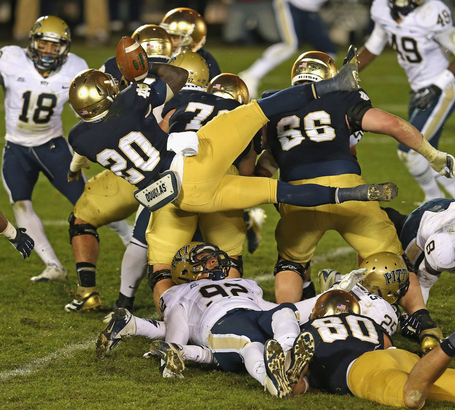 I realize the flexibility Riddick brings to the table---and he played a fine game with decent production on the ground and a couple super clutch receptions---but I don't even know why we're talking about Cierre Wood having a short leash.

Wood is not playing behind Marshall Faulk and shouldn't be watching on the sidelines while Riddick gets three time as many snaps as him. I'm still trying to wrap my head around the fact that Cierre has a few dozen more touches left in his career at Notre Dame---it feels like we're being needlessly robbed of watching a great talent.

With all that said, both backs played really well and when Wood fumbles in a key moment it's tough to beat this drum too loudly.

I did not agree with taking Golson out at the end of the first half and to start the third quarter. I can appreciate Kelly's reasoning, but I think he pulled the trigger too quickly on a quarterback who was, frankly, playing pretty well in the first half.

Golson started the game 4 for 4 with his passing. He finished the first quarter 8 for 11 and when he had his helmet ripped off before his benching he was 9 for 14 passing. That's 5 incompletions on a throwaway, a tipped ball, a Riddick drop, and a near deep bomb completed to Chris Brown.

Yes, the decision 'paid off' but that ignores the fact that Rees threw a terrible pick and that Golson was actually having a nice game for himself in the first half. I refuse to believe anyone watching the game thought that EG was going to be pulled specifically because he was "playing so poorly."

Did Golson turn the ball over at that point? Was he asked to sneak the ball in near the goal line on the second possession and fail? I thought he was doing just fine.

At any rate, Golson pulled through with a great performance down the stretch. Outside of the end zone interception, which earns its own Come On Man...

Two fourth quarter touchdown passes, a crucial 2-point conversion, and then the game-winning touchdown on a quarterback sneak.

Golson is making slow progress in the passing game, but his wheels are making him a huge threat right now as he picked up 6 first downs in this game on rushing attempts. Those extra downs are so crucial in close games.

Kyle Brindza missed 1 of his 4 field goals, plus a PAT attempt. He also couldn't notch a touchback once against one of the more dangerous return men in the Big East.

The punting/kicking coverage teams could be described as okay, but they need to be better.

I've moved on from being upset about the punt return game, but Neal missed a couple opportunities that haven't been there this year, plus he made bad decisions. He didn't catch a ball inside the 10, didn't run up on a short punt before it tumbled 15 more yards, and nearly lost a fumble on another return.

The blocking hasn't been great on kick returns, but if it were me I'd be looking elsewhere for a spark besides George Atkinson. He needs big running lanes---that aren't there for most return men across the country---and if they aren't there he's having major problems making the first guy miss to gain extra yardage. What's more, he's taking some serious shots with his lack of vision and agility.