On Manti Te'o and the Heisman Trophy

Sifting through what will be one of the most controversial Heisman awards ever.

Share All sharing options for: On Manti Te'o and the Heisman Trophy

This article originally started out as a think-piece about why I thought Te'o would not win the Heisman Trophy.

There's no way a middle linebacker is going to win the award, right?

I've tried to make peace with it.

He's a Defensive Player Not Playing Both Ways

We know it's wrong and goes against the nature of team sports to disqualify someone for being on the defensive side of the ball, but that's the way the Heisman works.

I'm not too upset about it when it's been this way since the award was first given out in 1935.

Even if a defensive player were to win it he'd have to have out-of-this-world statistics and ridiculous big plays in big games. His impact would have to be so absurd and obvious from every angle that the actual award was a mere formality.

That's a really great season for a middle linebacker, but I don't think many people from any fan base (including Notre Dame's) would have looked at that stat line in August and honestly thought Te'o could win the Heisman---even if the Irish were 12-0.

The interceptions is a historically amazing stat and is a really big deal, but outside of that I'm not sure there's enough to wow people. That doesn't mean 103 tackles should be dismissed (that's like dismissing a quarterback for throwing "only" 25 touchdown passes---oh, look Manziel has 24 TD passes!) but a figure closer to 150 tackles would help Manti's case.

Best Player on the Best Team?

We've seen all sorts of different players win the Heisman. Fairly pedestrian (for the award's standards at least) quarterbacks of undefeated teams, players with huge stats in weaker conferences, and truly breathtaking athletes on teams that weren't in national title contention.

Every year people try to define the Heisman Trophy but no one ever can do it. It's impossible. It's the most schizophrenic award in North American sports. It rarely ever makes sense and there's rarely much agreement over the annual winner.

Usually the best player on the best team wins the Heisman, but fans have been complaining for years that this isn't right.

"The Heisman isn't a team award", they may say.

Except most Irish fans are arguing this is why Te'o (largely) should win the award this year, and Te'o himself basically admitted this much at his press conference yesterday.

I know there are people out there who have decried a player for winning the Heisman in the past because his team was perceived to the best in the country (Mark Ingram, Jason White, Chris Weinke, Gino Torretta etc.) but these same people are using that formula to aid Te'o and his campaign today.

Yet, Robert Griffin III won it last year while his team lost 3 games---that's 1 more loss than Manziel this year who can't possibly win because "his team isn't undefeated and he played bad in 1 game."

Yes, RG3 was better last year than Johnny Football this year, but RG3's team was blown out in back-to-back weeks and he played poorly in a loss to Oklahoma State too.

And with all due respect to RG3, he didn't have to play against the Florida, LSU, and Alabama's defenses either.

The point here is that every year there are multiple facts and statistics that people will use to support their candidate, and every year they pick and choose whichever is more convenient that particular season.

Right now many Irish fans will use the undefeated point but I sincerely doubt they'd be doing so if it was a defender from USC or Michigan that was a possible Heisman candidate.

Let's not kid ourselves, if that were the case there would be so many Notre Dame fans screaming that Player X from Michigan isn't "the best player in the country and he wouldn't be a candidate if his team wasn't undefeated!"

Something hasn't sit well with me that we're knocking a Heisman candidate because he didn't play well in one game or maybe he didn't play against great competition every single week.

Let's look in the mirror a little bit.

Notre Dame's first Hesiman winner Angelo Bertelli missed the final 4 games of the season (yes I know it was for military service) and still won the Heisman. 6 games played and he won the Heisman!

Paul Hornung's team lost 8 games and although he played all three phases of the game, he only scored 7 total touchdowns all year to 13 interceptions---and yet he still won the Heisman without even gaining the most 1st or 2nd place votes.

Even the last Notre Dame winner, Tim Brown, could be heavily criticized.

Sure Brown played in a restrictive offense compared to today's standards but his production was down severely from his junior to senior season. His 21.6 yards per reception was outstanding in 1987 but hardly earth-shattering, and he only caught 39 passes all season. He was fairly average in the kick return game and he played for a team that lost 3 games during the regular season. 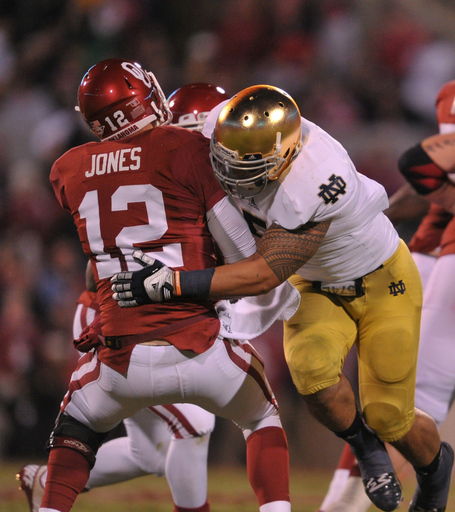 In sum, Brown won the Heisman as a receiver who scored 7 total touchdowns on the entire season while being held out of the end zone in his team's last two regular season games (both losses) while he gained just 173 total yards. He basically won the Heisman because of 1 big game (in mid-September no less) by returning 2 punts for scores against Michigan State.

I can't look at this history for Notre Dame and knock Johnny Manziel. I'll throw support behind Te'o but I can't knock Manziel when the Irish have some sketchy winners in the past.

Te'o Has Company---On His Own Team

I don't think there's any doubt that Te'o is the best player on Notre Dame. It's even more obvious that he's the leader in the locker room and the spiritual phoenix of this magical undefeated regular season.

There are a lot of really great players on this Notre Dame defense of which Te'o is the best, but he has more help than Manziel does on offense at Texas A&M---although Johnny gets to operate behind a terrific offensive line.

I certainly can't speak for him but in my mind Te'o winning the Heisman as a middle linebacker isn't that important to his legacy at Notre Dame.

He's too selfless. As special as Manti's season has been the 2012 college football year is too much about Notre Dame, the team, going undefeated and possibly winning a national championship.

Perhaps winning the Heisman won't necessarily take away from the attention the Irish team should receive, but it doesn't seem that imperative to launch a massive PR campaign to get it done for Te'o.

A couple weeks ago Manti was asked if being in the Heisman race crosses his mind and he replied:

So that's what I want. I'd rather be holding a crystal ball than a bronze statue. That's just me.

Manti Te'o doesn't need a Heisman Trophy to validate his impact on this game and program. Honestly, it does little to change the way I look at him, yet a national title would be an enormous and delicious tasting cherry on top of the sundae of his career in South Bend.

Okay, Te'o Does Kind of Deserve It

Is this some grand reverse jinx on my part?

Part of me does think Manti should win the Heisman. He's a senior who came back for all the right reasons. He's about as good of a representative for Notre Dame, college football, and a student-athlete as you're going to find. He's absolutely been the force behind the No. 1 team in the land and a great rebuilding effort at a traditional power that was in a 15-year slump.

It's also a down year for the award, Manziel is just a freshman after all, and while he'd be a better Heisman winner than several others from the past Johnny Football is obviously not a clear-cut favorite.

Also, when comparing Te'o and Manziel only one player had an awful game that directly led to his team losing. That's not the same as disqualifying a player because he lost one game and didn't play well, but this should be a huge part of the conversation. If Manziel wants to live with his stats---and I agree they are great---he also has to live with that one stink bomb.

For all the talk about Manti's great season being mostly based on being an 'emotional leader' he's stepped up in numerous big games.

Te'o has played phenomenal this year and it is an insult to his abilities as a football player to discount the actual impact he's had on the field because of the personal tragedy he played through and character he displays behind the scenes.

Manti isn't a Hallmark card. He's a bad ass football player that lifted an entire team to an undefeated season.

The question is will Manti's abilities and production on the field in 2012 be enough to win the award?

For all the quoting of the Heisman mission statement, it's still a football award. It's almost entirely based on what you did on the field. As such, I don't know how much Te'o's leadership, perseverance, and up-lifting story will matter.

Maybe I'm too cynical but I think that's the way it is.

There's a temptation to vote for Te'o because the Heisman award for many years has seemed tarnished by the likes of O.J. Simpson and Reggie Bush, by its insistence on ignoring defense, and by the plethora of uninspiring winners over the years.

In a lot of ways it feels like the Heisman Trophy NEEDS a winner like Manti Te'o, but at the same time I think Te'o doesn't need the Heisman. The Heisman doesn't need to be saved and Te'o shouldn't be held up as someone who is going to magically save the Heisman and forever change what the award means and how it is given out.

The Heisman is a deeply flawed award and as happy as I would be for Te'o to receive the recognition that comes with winning it, I frankly don't mind if Manti finishes in 2nd place.

Not that Te'o is somehow above the award, but he's done more than enough for his teammates, for his coaches, for his fellow students, for his fans, for his family, and for college football to be damn proud without it.

He's already a legend without the stiff arm on his mantle.

Winning the Heisman would be nice but it doesn't bring vindication to his career and in fact would just invite a bunch of arguing and more mud slinging.

So give the award to Manziel if you must. I'd rather Te'o's legacy include a crystal football.