Everett Golson is improving each and every time he steps on the field.

Share All sharing options for: BC/Wake Film Review: More Of The Same

First of all, happy Thanksgiving! Remember: The tastiness of your mashed potatoes is directly proportional to the amount of butter you use. So go ahead and throw in an extra stick. And stuffing is by far the best part of Thanksgiving, no contest.

Astute readers of OFD are probably aware that I didn't do a film review of the Boston College game last week. I had it written and it was ready to go, but something was wrong with the video file I was using to make my cutups. For some reason, after I cut out my clips, the video ran at double speed even though the audio was fine. Because I'm a diligent blogger, I decided to put off my post until I fixed the problem, so you're getting a dual BC/Wake film review this week.

Astute readers of this post will realize I never did fix the videos. Even worse, my Wake videos turned out the same way. I'm a diligent blogger, but not that diligent. If it annoys you, just pause the videos a lot. /SwarbrickDealWithIt.gif

But all of that is ok because the theme of both games is the same: Everett Golson is getting better each week.

This season has played out like KG's favorite "crawl, walk, run" analogy perfectly.

The offense at the beginning of the season was pretty vanilla as Golson learned the ins and outs of the offense. Against Purdue, Kelly had to make him check with him at the sideline before every snap. Against Michigan, Golson had to be benched because of some boneheaded plays early in the game.

But as the season's progressed, Golson's been given a larger and larger role in the offense. Kelly has started to add new wrinkles built upon that vanilla offense from the beginning of the year.

First, let's look at the shovel pass the Irish used against Boston College.

This play looks fancy, but it's nothing more than the counter play Kelly has used so much in his time at Notre Dame. 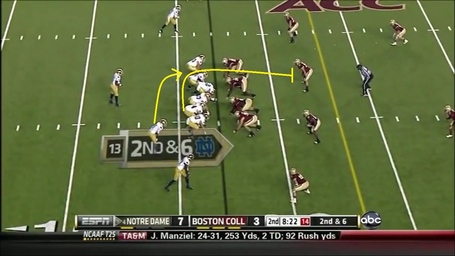 Obviously there's no "countering" here, but the blocking is the same. Christian Lombard pulls from his tackle position and leads the way for Theo Riddick. 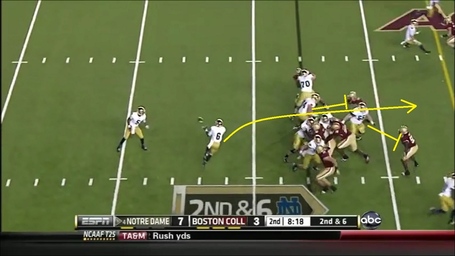 Boston College spread out their defense against the empty backfield look, so a big hole opens up. Braxston Cave and Mike Golic seal off the right side, while Zach Martin seals off the left. Lombard picks off a stray linebacker and Riddick picks up an easy 20 yards.

Next, let's look at two plays built from one of Notre Dame's base plays, the outside zone.

The first is very straight forward - it's just the outside zone but run by the QB. 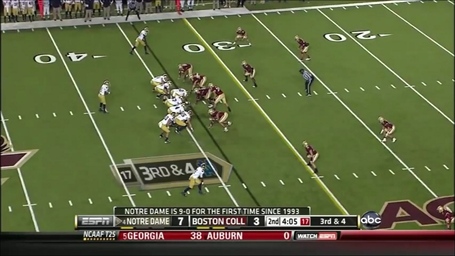 Again, BC spreads themselves out even though the Irish line up with two tight ends. If we count the linebacker five yards off the line and the linebacker who shows blitz but backs off at the last second, you end up with six defenders versus seven blockers. 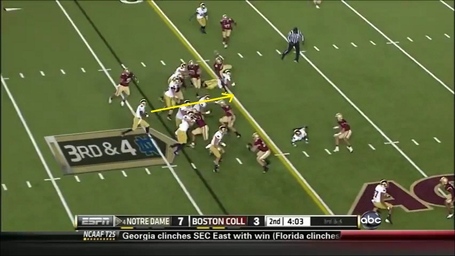 What I like about this play is that Golson shows some pretty good vision. Rather than continuing outside in an attempt to get around the corner, Golson saw a hole opened up by Cave and Golic and cut up to get the first down. It's nice to see that from a young player.

The second play built off of the outside zone is one of my favorites - the speed option.

This play is great for three reasons. First, outside of a few rules about who gets blocked and who doesn't, the blocking is pretty much the same as an outside zone, so it's a natural fit for the offense. Second, while an outside zone out of the shotgun would require the running back to run across the quarterback, this play is run to the side of the running back, punishing teams that slant the wrong way. And third, it involves the option, and I love the option.

Let's break it down. 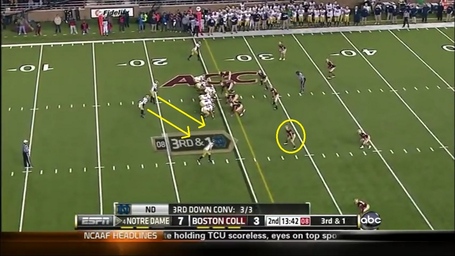 From this formation, you would expect any running plays to go to the left (ignoring the tight end on the right side of the line). Boston College only has six defenders against six blockers, so this is a good time to run. The circled player actually comes on a blitz, though he's the optioned defender. 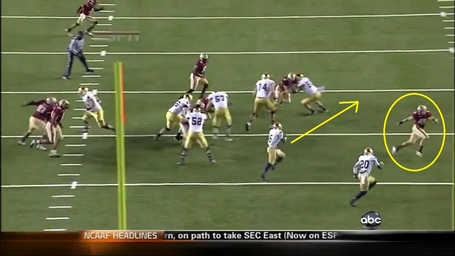 This play shows how the speed option is great when paired with the outside zone. As I said before, a normal outside zone run would go to the left. If you watch the video, the defensive end to the offense's right immediately cuts to the left. In fact, he actually ends up getting blocked by Mike Golic, the right guard. This leaves Eifert and Lombard to take care of the linebackers. The optioned player stays on Cierre Wood and Golson has a lot of room to run.

The ability to option off a defender instead of blocking him is what makes the option so good. If the defense doesn't set the edge, they can give up a lot of yards.

Here's the option play from the Wake Forest game that Cierre Wood scored his touchdown on. 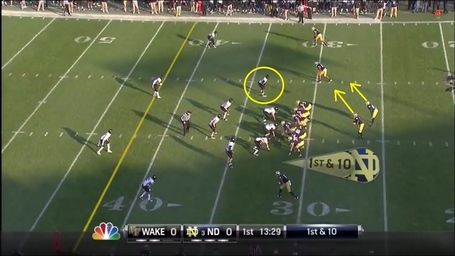 You see from Wake's alignment that they were set up to stop the outside zone, but not the speed option. The field-side outside linebacker is set up on the edge, but the Demon Deacons don't have anyone on the Troy Niklas. The circled defender is optioned on this play. 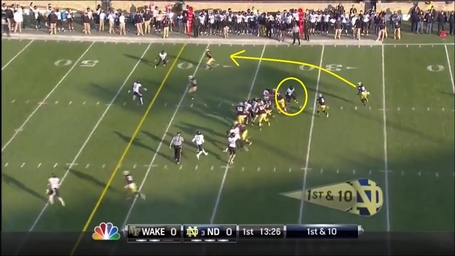 Niklas has a free release to the second level and takes on a middle linebacker. Chris Brown blows past his man to block the safety.

The linebacker takes Golson, who pitches to Wood. Because Niklas was able to set the edge, there's no one to stop him except two defensive backs with wide receivers in front of them. Brown and TJ Jones do an excellent job of blocking downfield and spring Wood for the touchdown.

Ok, so you run the outside zone out of the shotgun because it's one of your base plays. You're opponent tries to stop you by slanting towards the run so you counter them with the speed option. But what if you want a counter to the counter?

Then you hit them with the sprint draw.

This isn't a new play - Irish fans will remember George Atkinson's big run against Michigan State off of this play - but it complements this series of plays well. 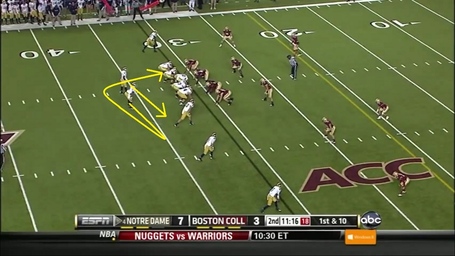 The Irish also roll out to throw the ball occasionally, so this play counters that as well. George Atkinson follows Golson outside, but then turns around and takes the handoff. 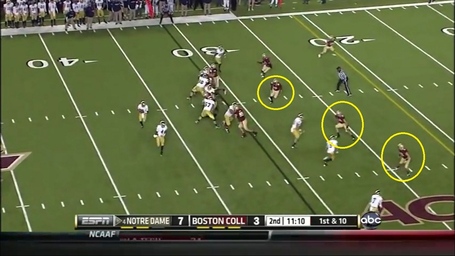 The circled players bite on the fake to the outside. 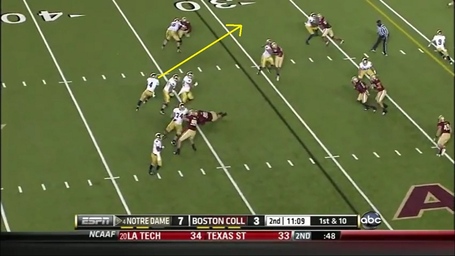 Atkinson has plenty of room to run. Let's just ignore the fact that he fumbled on this play...

That's a play action pass off of a speed option, a play Lou Holtz used to good effect with Tony Rice back in the Glory Days. You're a tricky SOB, Brian Kelly. 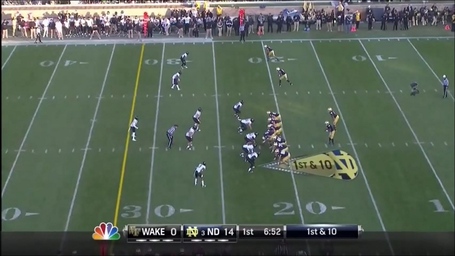 The formation is similar to the play on which Wood scored his touchdown on the option pitch, but Tyler Eifert is attached to the line instead of split out wide. With only one safety over the top, Wake is clearly expecting a run. 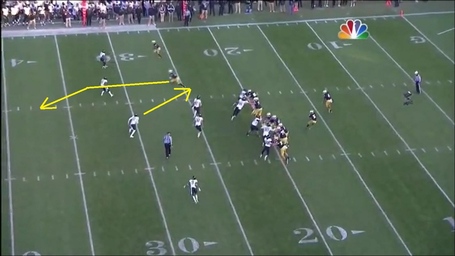 Golson and George Atkinson run out like it's a speed option. The safety flies down towards the line of scrimmage to help in run support. But Golson pulls up and uncorks a pass deep downfield to Brown. The pass falls incomplete, but if Golson had thrown the ball just a little bit earlier, Brown probably would have scored a touchdown.

I can't say we saw anything earth-shattering against Boston College or Wake Forest, but I think we saw the playbook open up a little bit. It's been a long and, at times, painful process, but we're starting to see what Golson can do in this offense.

Golson has been criticized for not throwing the ball over the middle, but I think he did an excellent job of that against Wake Forest. And the ability to keep drives alive on third down against both Boston College and Wake was encouraging.

The Irish defense has been elite all season, but the offense has been uninspiring at times this season. We've seen a lot of growth in the offense and hopefully games like the ones against the Big Ten teams are a thing of the past. This Saturday will give Golson and the rest of this offense a big stage to show what they're capable of to the nation.

They're walking now, so look out when they start to run.