Any fears of a Senior Day let down were swiftly dismissed by the Fighting Irish on Saturday afternoon.

Notre Dame raced out to a 21-0 lead in the 1st quarter and had the game in the bag after two possessions in the third quarter.

Despite taking their foot off the gas with a few minutes left in the third quarter the Irish totaled 584 yards on the afternoon---second only to this season's 587 yards against Miami for the most of the Kelly era.

Let's break down each unit.

Due to Wake Forest's quick passing offense the line wasn't able to inflict a ton of statistical damage, but they were nonetheless dominating and handling the Deacon line all day long.

Louis Nix finished with 7 tackles (a season high I believe) and also batted down a pass. You'll notice after the player introductions in which he called the Irish line the 'fattest in the country' Big Lou knifes through and makes a great tackle. He was all over the place against Wake.

Freshman Sheldon Day also had a nice game, finishing with 5 tackles, a career high if I'm not mistaken.

Old Man Kap finished his last game in Notre Dame Stadium with one of his best efforts of the year: 3 tackles, 1 tackle for loss, 1 pass break up (that he should have caught!), and 2 quarterback hurries.

Stephon Tuitt picked up 3 tackles and 1 more sack as he inches closer to the single-season Notre Dame record.

Prince Shembo was held without a tackle but did register a quarterback hurry. If you want to see how a player can be effective without getting his name on the stat sheet watch Shembo take on two linemen on the Calabrese fumble play.

Manti Te'o had a quiet game for his standards with just 6 tackles. He probably won't have the oomph to win the Heisman but it's a huge win for his effort this season to get invited to New York.

It was nice to see Carlo Calabrese have one of his better games in the blue and gold. He tied for the team lead in tackles with 7, notched a tackle for loss, and of course laid the wood on Wake's running back on their first series to cause a fumble. 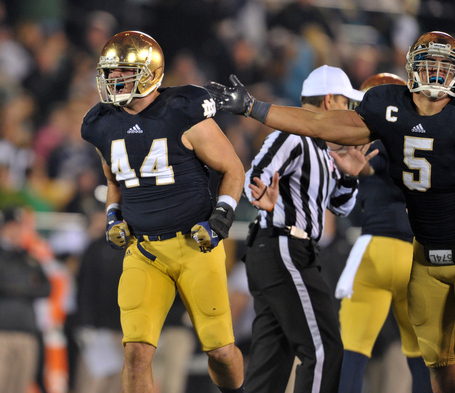 Because of the blowout we were able to see some of the younger 'backers get some solid playing time. In addition to regulars Spond (3 tackles) and Fox (3 tackles) we also had Ben Councell (4 tackles), Jarrett Grace (3 tackles), and Romeo Okwara (2 tackles, 0.5 for loss) mix it up on the field.

Quiet game for the secondary as Wake Forest only passed for 154 yards on 23 completions. There were tons and tons of underneath routes mostly cleaned up by linebackers but Bennett Jackson finished with 3 tackles, Russell with 1 tackle, Farley with 4 tackles, and senior Zeke Motta with 4 tackles and a fumble recovery.

Again, youngsters made some nice plays though.

Elijah Shumate made a nice tackle in the 1st quarter to stop Wake on third down, while Jalen Brown, yes Jalen Brown, showed up with a huge hit.

Wake Forest was able to use their speed up front and cause a handful of tackles for loss, but other than that the Irish offensive line played really well setting up 221 rushing yards at 7.4 per rush.

The Demon Deacons were credited with 5 quarterback hurries but it didn't seem like the Irish quarterbacks were pressured all that much.

I can't verify each took snaps on the line but Connor Hanratty, Nick Martin and Bruce Heggie were all credited with playing on Saturday. Hanratty was definitely out there as he was called for a penalty.

This was the Tyler Eifert we should have seen all season with a more settled quarterback situation. TE finished with 6 receptions, 85 yards, and a touchdown. He also broke Ken McAfee's school record for receptions by a tight end in the process---well done Mr. Eifert!

It's nice to see Niklas continue to be targeted in the passing game and even better to see Ben Koyack catch a pass. Koyack might have to work on his blocking but he could be a much better receiving tight end if given the chance.

5 receivers caught passes on the afternoon---we were so spoiled!

Chris Brown caught a short pass and nearly another deep bomb. Daniel Smith chipped in a 10-yard catch, and Toma caught a pair for 37 yards.

Apparently all John Goodman does nowadays is catch touchdown passes. FC Goodman caught his fifth and sixth passes of the season as well as his 3rd touchdown on a 50-yard pass from Golson.

It was a career day for TJ Jones as he just barely misses his first 100-yard performance concluding the afternoon with 97 yards on 6 catches and 1 score. Jones has been a bit of a revelation this year as he now is tied for the team lead in receptions this season with 40.

Remember how memorable Jonas Gray's season was last year? He finished 2011 with 6.94 yards per carry on 114 carries---just outstanding production that hadn't been seen in a long time at Notre Dame.

Cierre Wood is now averaging 7.05 yards per carry on 102 rushes. 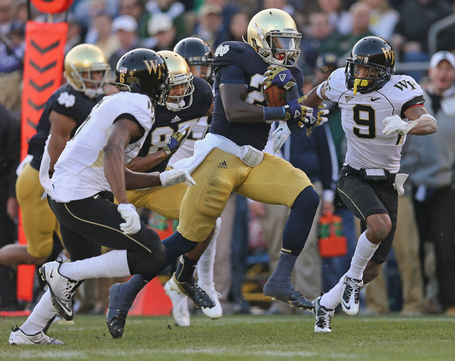 Wood had the longest run of the year. Jonathan Daniel/Getty Images

In fact, Wood has just 14 fewer rushing yards on the season than Theo Riddick despite Cierre having 58 fewer carries.

Speaking of Theo, he quietly struggled with his limited carries (6 for 20 yards) but came down with a great day as a receiver finishing with 58 yards on just 3 receptions.

Both George Atkinson and Cam McDaniel did okay coming in later in the second half.

Just so many impressive throws by Golson during this game. His interception was a really dumb mistake but as he admitted afterwards he forced it trying to get every senior a touchdown.

Otherwise, going 20 for 30 with a career-high 346 passing yards and 3 touchdowns was just phenomenal, especially since he played just 1 series in the third quarter. It was nice to see Golson take the responsibility of moving the ball through the air, open up the deep ball, and be very efficient in doing so.

Golson is improving so quickly that it's kind of scary. His sideline out route passes are bullets and are very accurate. As beautiful as his touchdown to TJ Jones was on the pump fake, his first throw to open the first series of the 3rd quarter exhibits just how talented the young redshirt freshman really is.

He runs a bootleg, is nearly chased down by a defender who actually gets his hands on Golson, yet EG fires the ball 22 yards downfield right on the money to TJ Jones for a 1st down.

Turk was Turk in the punting game but at least he didn't uncork any true duds.

Brindza missed a field goal but connected on another. He's clearly not as comfortable kicking from the right hash but there are worse things in the world than being undefeated and your kicker only connecting on 72% of his kicks.

Coverage teams were solid and it was interesting to see Davonte Neal actually return some punts. Sure he only gained 13 yards but that's like 100 for most teams.

Also very interesting to see McDaniel and Cierre Wood out there on kickoffs instead of George Atkinson. McDaniel took the opening kickoff 17 yards on his only attempt because....shut out! 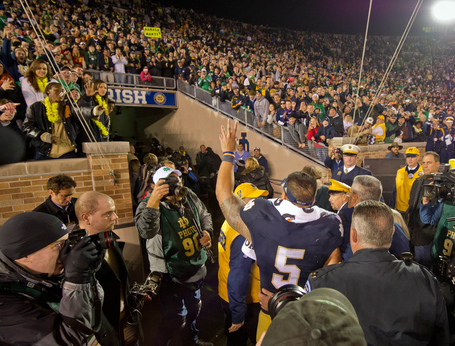