Breaking down this weekend's Senior Day game against the Wake Forest Demon Deacons.

Notre Dame takes to the field for the last home game of the season this Saturday looking to stay undefeated on the season. The Wake Forest Demon Deacons come to South Bend on the back end of a 2-game series that began last year in Winston-Salem.

Wake played the Irish pretty tough last year so there should be plenty of preparation this week from Notre Dame. It will also be Senior Day as the fans say goodbye to Manti Te'o and others playing their last game inside Notre Dame Stadium.

Here is the One Foot Down preview of Saturday's game.

The number of career passing yards for true junior Demon Deacon quarterback Tanner Price. That ranks 5th best all-time at Wake Forest. Price should have a good shot at breaking Riley Skinner's school-record of 9,762 yards when he returns as a senior in 2013.

This will be just the 2nd regular season game since the beginning of the 1954 season that Wake Forest will travel to play a northern team in the month of November or later. In 1997 the Deacons traveled to Rutgers in November and won 28-14. Before that game you have to go all the way back to Wake's 1953 game at Boston College for another cold-weather matchup in November or later.

That is the number of total rushing yards last week for Wake Forest in their game against NC State. That was their 6th game this season being held under 100 yards and their 7th being held under 3.0 yards-per-carry.

This the turnover margin for both Wake Forest and Notre Dame this season.

The redshirt junior is a jack-of-all-trades athlete and Wake Forest's most dangerous playmaker. Think Golden Tate circa 2009. Campanaro even has the same body-type as Tate at 5'11" 195 pounds. 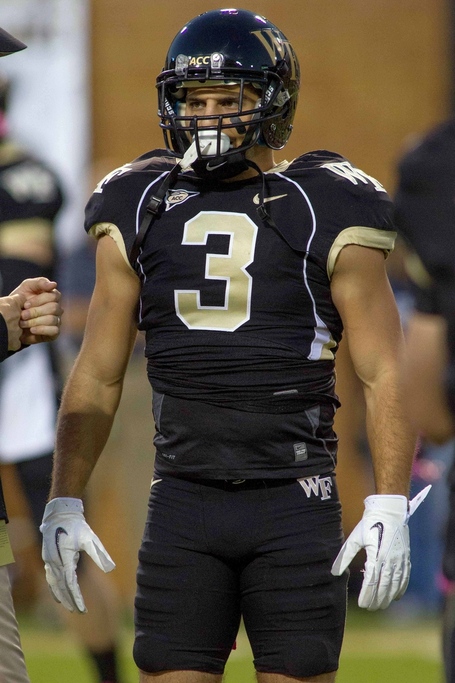 He was Wake's second receiver last year but has taken over the primary role in 2012 after Chris Givens bolted early for the NFL. So far Campanaro has totaled 65 receptions, 618 yards, and 6 touchdowns in just 8 games while missing a couple games with a broken bone in his hand. For his career, Campanaro has 148 receptions, 1,558 yards, and 8 touchdowns as well as 45 carries, 215 rushing yards, and 2 more touchdowns. He's even thrown 3 touchdown passes including a 39-yard score last week against NC State.

The junior from Austin, Texas has been starting since his true freshman season and is a solid quarterback. He's fairly athletic but doesn't have a terribly strong arm. His best asset is that he's smart with the football with just 20 interceptions in 1,004 career attempts.

Price's biggest problem is that he plays behind an awful offensive line and he doesn't have many reliable weapons on the field outside of Campanaro. He wasn't asked to do much last year in the meeting with Notre Dame, but Price had a solid game nonetheless (17 for 24, 187 yards, 1 touchdown).

The redshirt junior tore his ACL in 2010, but came back strong and saw a few starts at middle linebacker last season. For 2012 he's been moved to outside linebacker in Wake's 3-4 defense.

So far Jackson has flourished with the position change leading the Demon Deacons in tackles (75), tackles for loss (8.5), and tied for the lead in sacks (4.0).

We talked a lot about Whitlock last year in the run-up to Wake's game versus Notre Dame. He's outlandishly small for a nose guard in a 3-4 defense at 5'11" 260 pounds but has been consistently productive throughout his career.

The redshirt junior has missed a couple games this season (and been slowed in others) with an ankle injury but was able to start last week against NC State. Coming into Saturday's action Whitlock has 149 tackles, 29 tackles for loss, 9.5 sacks, and 7 quarterback hurries in 33 career games.

Overcoming the Emotion of Senior Day

After perhaps the most uninspired Senior Day in 2009 following Charlie Weis' last home game at Notre Dame, the Fighting Irish under Brian Kelly have won the last two final home games of the season. Two years ago Notre Dame upset Utah in the rain and last year defeated Boston College.

The weather should be sunny and in the low 50's so the atmosphere should be plenty cheerful to say goodbye to Notre Dame's seniors---in particular the program leader Manti Te'o.

Let's hope there's no hangover from the pre-game festivities and the team stays focused for 60 minutes.

Running the Ball Too Much

Go away from the offenses bread and butter, you say?

Yeah, it might not be a bad idea for this game. Wake has some terrible defensive statistics but their running defense (despite being a small 3-4 defense) is actually not that bad. They're 65th overall surrendering 156 yards per game and they're a much stronger 32nd nationally giving up just 3.69 yards per rush.

Wake's rush defense was gashed considerably in back-to-back weeks against Florida State and Army (combined 122(!!!) carries for 814 yards) but they have given up just 755 yards at 2.49 per rush in their other 8 games. A nice balanced gameplan might be the best way for success.

Bad Notre Dame has appeared over the past two games. 2 fumbles last week versus Boston College brings the total to 5 turnovers in 2 games.

We've been saying it all year, keep the turnovers to 1 or fewer and a win awaits.

In terms of talent and experience this may be the weakest offensive line Notre Dame will face all season.

Wake Forest brought back just one starter from 2011 in 5th-year senior Garrick Williams (6'4" 310) and they've been hit hard by injuries and a transfer. Backups redshirt junior left tackle Steven Chase and redshirt sophomore left guard Antonio Ford were primed to become starters this season but both have suffered knee injuries. In addition, redshirt sophomore right tackle Daniel Blitch transferred to Charlotte this past summer.

As you would expect from such an inexperienced unit, the numbers aren't pretty. Wake Forest is 90th in sacks allowed (23), 102nd in tackles for loss allowed (66), and 115th in rushing offense at 102 yards per game. They have good size, but they'll have their hands full all afternoon long against Notre Dame's elite front 7.

The situation is a little better on the defensive line for the Deacons, although they are insanely small up front for a 3-4 defense.

The aforementioned redshirt junior Nikita Whitlock (5'11" 260) returns at nose guard while freshman Tylor Harris (6'4" 245) has been getting plenty of time this season with Whitlock's ankle injury. 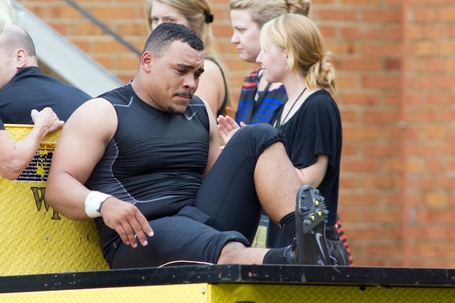 Whitlock has been dealing with an ankle injury. Jeremy Brevard/US Presswire

Redshirt junior Zach Thompson (6'5" 255) is back at defensive end and is having a strong season. The other end spot is manned by '11 backup and redshirt junior Kris Redding (6'4" 265) and Akron transfer and 5th-year senior Hasan Hazime (6'5" 270)---both of them are having nice seasons as well.

As previously mentioned, this defense is average against the run but they are fairly good at getting into the backfield. Wake is 36th nationally with 23 sacks and 28th nationally with 68 tackles for loss---so they make up for size with speed and disruptive plays.

Wake would probably like to be much more disruptive this Saturday but they'd probably take the same offensive output that Notre Dame put up last year.

The line for this game opened at most establishments at +22 and moved two points very quickly making Notre Dame an even bigger overcat. My gut reaction was that this is far too many points for the Irish to cover when they haven't played great at home. However, as usual Vegas knows a thing or two 'bout these things.

Wake has struggled on the road going 4-12 over the past 3 seasons. They're 1-3 on the road this year being outscored 118 to 36 in those games. And then there's this stat:

They may be feisty on defense but they're seriously out-sized against Notre Dame, plus Wake's offense has been dreadful most of the season. Factor in the Deacons coming off a deflating blowout loss to an average NC State team, their lack of experience playing in the North, the history working against them, and the spread starts to make sense.

The Demon Deacons do have some things going for them though. They played Notre Dame tough last year, they're fighting for bowl eligibility and obviously have an opportunity to pull a major upset.

I actually think there's a decent chance that Wake Forest's defense plays pretty well on Saturday, especially if Notre Dame remains committed to Tressel Ball™ as they have pretty much all season. Their raw numbers, not to speak of their advanced numbers, aren't that bad for defense and I'd be more surprised by 45+ points scored by the Irish this weekend then something in the high-20's.

The problem for Wake is that their offense isn't doing them any favors and certainly won't match up against Notre Dame's defense. The Deacons have returned just 3 starters on offense. Yes, three. Their running back Josh Harris has experience as does their fullback Tommy Bohanon, but there's 4 new offensive lineman, a new tight end, and a combination of journeymen and inexperienced youngsters at wide receiver.

With the way Notre Dame has played at home this season the combination of a large spread plus the fact that nobody from Wake Forest thinks their team has a chance (as in they'll be lucky to score any points) I'm a little hesitant to predict an easy victory. If this game is going to be a blowout it will be because the defense forces a couple turnovers, possibly scores their own touchdown, and leaves the Irish offense with several short fields. The ND offense may be efficient but they aren't dominating quite dominant yet.

It's Senior Day so a slow start seems likely. A lead something in the neighborhood of 13-3 at the half sounds about right with the Irish pulling away in the third quarter, leading to a running-the-clock fest in the fourth quarter with a comfortable lead and an undefeated home season in the bag.