Well that wasn't much fun.

It wasn't a blowout but the game never felt in doubt.

The Irish were knocking on the door about to break the game open, but it never happened. Then Boston College turned around and did juuuust enough to move the ball and prevent the Irish from having a dominant defensive performance.

It was all compounded by the telecast floating away from covering the football going on before them and even our open thread losing interest for long stretches.

I don't want to say this was one of Nix' bad games, but he didn't play great. He finished with 1 tackle, but made a great hustle play sprinting, yes sprinting, to the sideline to make a hit.

Pretty quiet game from Mr. Tuitt. I thought he had a sack/fumble at the end but he's only credited with a tackle for loss by und.com, then again they have Connor Hanratty starting the game at outside linebacker. That was his only tackle of the evening.

Kapron Lewis-Moore has 2 tackles including a sack and forced fumble---I liked his effort all night.

Sheldon Day made a great play on a tackle for loss---one of his two tackles.

With this unit's talent it wasn't a fine performance. BC quarterback Chase Rettig threw the ball 43 times and had a lot of time in the pocket on most throws. The official numbers are usually wacky, but the Irish were credited with zero quarterback hurries.

Prince Shembo had himself a dandy of a game. 5 tackles, 4 for loss, 3 sacks, and 1 fumble recovery. Take out his performance and this defense had a pretty average game for their standards. Shembo might get 10 sacks this season which could give this team 2 players in double-digits nom nom's...has that ever happened before at Notre Dame?

Can we talk about how amazing it is that Te'o made his 6th interception of the season? That's 2nd nationally out of all defenders! Still, he only had 5 tackles and this was a very quiet game for him. 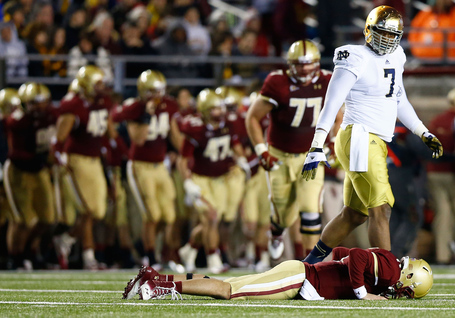 Spond had a nice pass breakup, but overall I didn't see much out of him, Fox, and Calabrese. That could have just been me though.

Very encouraging signs out of Ishaq Williams as he continues to get a lot of playing time and is making some things happen out there.

The duo of Jackson and Russell played well when they were both out there. Jackson had two great pass breakups---and should have had a pick 6 out of that---and laid a couple big hits.

K-Hustle is good for a couple big hits a game. If not big hits, at least fundamentally sound and beautiful tackles. He did so again in this game but left the game with an injury. Let's hope it's not too serious.

We haven't seen much of Farley lately. I wonder how much that hand with a cast on it is bothering him.

Zeke Motta cleaned up on a lot of plays finishing with 7 tackles but often times BC had already made the play down field. Motta can lay the smack down and has improved so much this year so I can't complain too much.

Solid performance with no sacks and no quarterback hurries.

I thought the run blocking could have been a little better. 184 yards on 40 carries isn't anything to brag about against this Boston College defense.

Here's something that I randomly thought about during the game: Notre Dame doesn't have very tall offensive linemen. That's about to change over the next couple years though.

Very strong game for Tyler Eifert. He finishes with 6 catches and 67 yards and it felt like he was about to have a monster game when it was all said and done. It didn't come to fruition because Notre Dame only threw the ball 4 times after going up 21-3 following the first drive of the second half.

Nice to see Hercules get his first career touchdown. Hopefully there's many more to come in his career.

When's the last time we heard Koyack's name? Is that a good thing that means he's blocking well? Or is he not playing that much anymore? I swear he's not out there that much.

TJ Jones seems tough and slippery this season. That's a great combination to have.

It would have been great to see Daniels come down with that grab in the end zone, but even better if he wasn't injured on the play. Looks like the team is going to be without him for a while which could be a big blow to a receiving corps that lacks playmakers on the outside.

John Goodman made an appearance and FC'd a touchdown pass from Golson. That was all arm strength and vision by EG though.

It's been interesting to see the (near) complete disappearance of the slot position in this offense this year. Toma had a drop---on a somewhat poorly thrown ball---but he doesn't seem to play all that much anymore. In fact, the offense appears to keep two tight ends and Daniel Smith as blockers more often than Toma in the slot with 3 wide receivers.

Remembering the redshirt discussions revolving around the freshmen receivers a couple months ago?

I'm not sure if Ferguson is playing on special teams, but he might be able to redshirt since he hasn't caught a pass or seen the field since Navy. We'll see if Brown or Neal get more involved with Daniels' injury.

162 total yards on 22 touches for Theo Riddick is solid production. From a yards-per-carry aspect this was his second best game of the season (5.8) which I think perfectly sums up how good but not great of a runner he is.

The fumbles by Riddick and Atkinson really put a damper on the team's output following a season-low 8 possessions. When you're trying to string together these ungodly long drives it puts a premium on finishing those drives off with points. You have to be perfect and when you fumble it sometimes feels like you lost more than just a chance at 7 points---especially against a team like Boston College.

Count me as a little worried about George Atkinson being "the guy" next year at running back. He's nowhere close to ready right now in my opinion, which is okay I guess but I'm getting the sneaking feeling he might always be a little quirky and not refined to be a go-to 1st string tailback.

On that note, next year's backfield could be pretty fascinating. It wouldn't surprise me to see Carlisle step up as the main guy, although granted he should still be considered a big question mark as an inexperienced player. I'm sure we'll see plenty of McDaniel, Mahone, and maybe even Jamel James too next year. I sure hope we don't try to make Atkinson into Theo Riddick 2.0 because that isn't going to work.

6 carries for Cierre Wood. I'm done trying to figure it out.

I don't have anything bad to say about Golson's performance, really.

He missed a couple throws yes, but was basically quietly on fire in the passing game for most of the first 6 series hovering around a high-70 completion percentage. EG finished with his highest passer rating of the season and notched a couple passing touchdowns---something he's lacked this year. 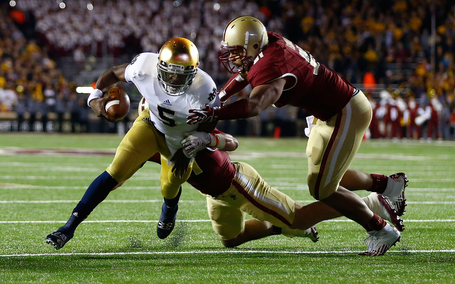 His rushing numbers weren't great, but he seemed more potent than what that the stats say. That's probably because he picked up 5 first downs on the ground and scored the game's first touchdown with his legs.

Golson seems to really have grown up over the past month and especially over the past two games. I'm not sure we have to play so conservatively with him and shut down the passing game in the second half against bad teams.

Taking the training wheels off isn't likely to happen this year though.

Turk bounced two of his punts inside the Boston College 20-yard line, so that's nice.

The coverage teams were solid. Not much else to talk about.

Animated Drive Chart brought to you by Gameday Depot.

That's all I got this week. Not even 2,000 words. Now we look forward to Manti Te'o and the seniors' last game inside Notre Dame Stadium next week.