The talking heads are praising Brian Kelly for the game he called against the Sooners. And they're absolutely right.

A lot of praise has been heaped onto Brian Kelly in the aftermath of the game against the Sooners, and rightfully so. I've always been impressed with Brian Kelly as a playcaller. He's shown the ability to read what the defense is doing and then put his players in a position to beat it. And if the defense doesn't adjust, he'll just keep on attacking.

That's what I saw last weekend against the Sooners. I found their defensive game plan a bit curious because they decided to play Notre Dame straight-up instead of stacking the box and daring Everett Golson to beat them with his arm, as almost every opponent Notre Dame has faced has done this year.

Oklahoma played man-to-man with both safeties back deep almost the entire game. When the Irish lined up with two tight ends, the defense looked like this: 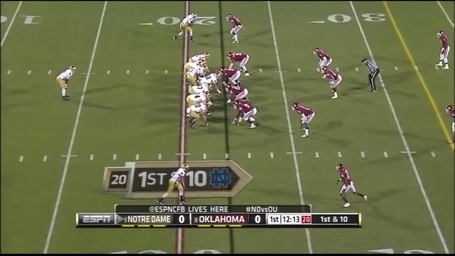 One linebacker and a safety - the two on the outside - are covering the tight ends and the other linebacker - the one in the middle - is covering the running back. The other safeties are back deep.

When the Irish spread the field, the defense looked like this: 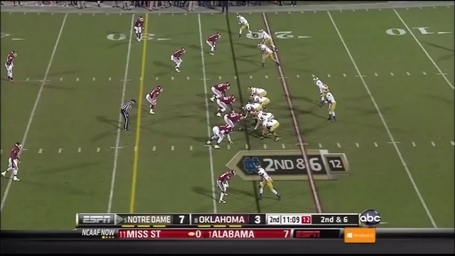 You can see one linebacker lined up directly over the running back and three players lined up over the trips receivers to the outside. When a tight end was on the line on the same side as the running back, it created a kind of "unbalanced" look to the defense that I thought was a little odd.

Not dropping a safety into the box seems questionable with the Irish offense so reliant on the running game. My only guess is that the Stoops brothers felt they could beat the Irish one-on-one on defense. It should be noted that this is the same defense Purdue brought out against Notre Dame last season when the Irish ran them off their home field.

Kelly has shown that if you don't mix up your defense, he will beat it. He did this a couple of ways: by calling plays built to beat man coverage and using plenty of play action, sometimes at the same time.

As Eric pointed out in his postgame review, we saw some crossing routes and drag routes against the Sooners, something we haven't seen a lot of this season. This was done specifically to beat Oklahoma's defense.

This play is known as "mesh" because the two inside receivers cross each over the middle of the field (they "mesh"). 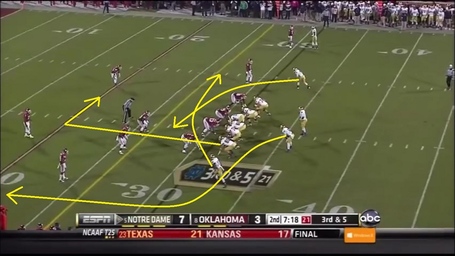 The running back runs a wheel route, the tight end runs a dig route over the middle of the field, and the far outside receiver runs his man out of the play and maybe takes a safety with him, but the crossing routes are what's important. One receiver ducks underneath the other, who "unintentionally-intentionally" sets a pick on the other's defender. As long as he doesn't change his route to get in his way it isn't offensive pass interference. This route combination is great against man coverage. 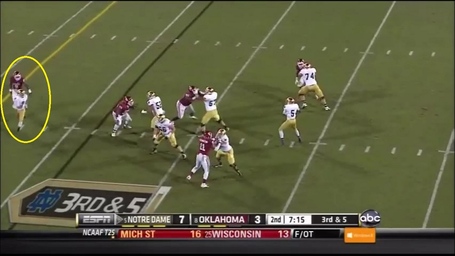 Daniels and Toma mesh and Toma comes open. Golson hits him for an easy completion and a first down. 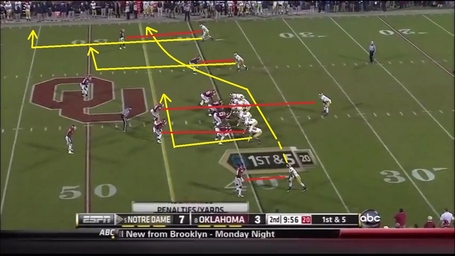 The red lines show who in the OU defense is covering who. Kelly counters with flood routes that run off defenders and then open up T J Jones on the underneath route. 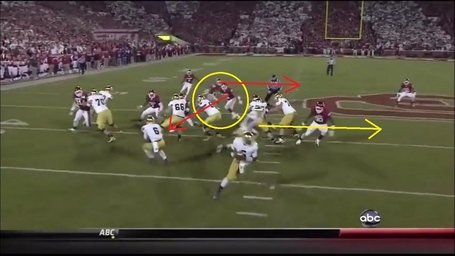 I think this is a well-designed play. TJ Jones runs across the formation in the backfield, crossing paths with Theo Riddick on the play action. Riddick's defender follows him towards the sideline, but Jones's defender has to keep going to the middle of the field. Consequently, he has to go around Theo's man, which prevents him from coming up on Jones. When Golson gets the ball to him, he has plenty of room and picks up some good yardage.

Kelly also used OU's coverage to get Golson involved in the run game.

Kirk Herbstreit called this play perfectly during the broadcast. 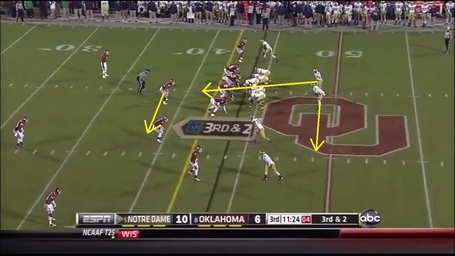 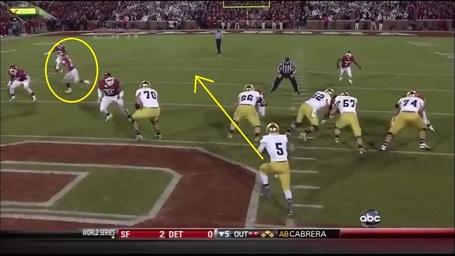 This leaves an open field and an easy run for Golson. You can see the linebacker who would be filling the space where Golson is running vacating the area.

I thought this play was also very interesting and well-designed. 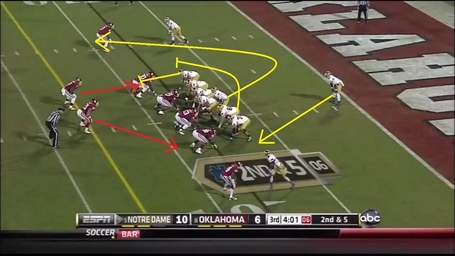 This is another play action, but Golson keeps it on the bootleg instead of throwing the ball. The play action takes care of Riddick's defender and Chris Watt pulls from his left guard spot to act as a lead blocker. 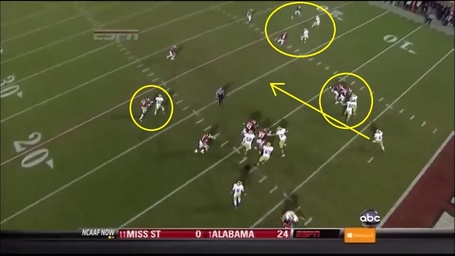 Watt and Tyler Eifert take care of the linebacker covering Eifert and the defensive end. Because the Sooners are in man coverage, a few of the closest defenders to Golson have their back to him and they are all being run off down the field and away from the play. This leaves a lot of room for Golson to work.

As I said at the beginning, I've always been impressed with Brian Kelly as a playcaller. We can harp on individual plays (the sequence against Stanford in the end zone, the pass against Tulsa, having the audacity and arrogance to the throw the ball on 3rd and 5 instead of running it like Ara would have, etc.) but his game plans are usually solid and I don't feel like there has been a game in his almost three seasons at Notre Dame where I felt like he failed to make adjustments when the original plan didn't work.

What I liked most about this game was that he stuck to the team's strengths the entire game. Jumping out to the early lead certainly helped, but Kelly remained committed to the running game and then gave Oklahoma a healthy dose of play action in the passing game. Golson was given plenty of easy reads and simple throws and was allowed to make plays with his feet. Even when he was asked to make difficult throws - the deep outs to DeVaris Daniels and TJ Jones come to mind - Golson typically put the ball right on the money where only his guy could catch it.

I generally hate the "outcoaching" meme that usually comes up after every big game since so much of the game has to do with winning individual battles on every play, but I'll break down and say Kelly really outcoached Stoops in this game. The playcalling was probably the best I've seen since the Purdue game last year.

Once Kelly and Chuck Martin figured out the defense, they attacked it while still mixing up the playcalls and sticking with the running game and Oklahoma didn't have much of an answer. The Sooners are talented enough that they still did a pretty good job against the Irish, but Mike Stoops didn't do a whole lot to put the defense in a position to succeed and that might have lost them the game.

I said last week that the Irish would need to stick with their identity as a hard-nosed running football team to beat Oklahoma and they did. Now they have to go out and do the same thing to Pitt.