We break down the 68th meeting between the Fighting Irish and Panthers.

Notre Dame looks to keep its undefeated season alive this weekend against the Pitt Panthers, a team that has played the Irish 5th most of any opponent.

In recent years this has been a close and hard fought game. This year the Irish come in as heavy favorites in front of a home crowd. Will Notre Dame be able to concentrate for 4 quarters after beating Oklahoma and take care of business against Pitt?

Here is the One Foot Down preview of this weekend's game.

This is Notre Dame's record against Pitt when the Irish come into the game while ranked inside the AP top 5. The Irish currently sit at No. 4 and this is their first time inside the top 5 while playing the Panthers since 1993. The lone loss came during 1987 in Lou Holtz' second season with the Irish after the team started 3-0. The average score of these 14 games has been Notre Dame 33.5 to Pittsburgh's 12.3 points.

The home record for Notre Dame in their last 3 games against Pittsburgh. The Irish controlled a tight game during Brian Kelly's first season in 2010, but Notre Dame lost the previous meetings in 2008 and 2004. The 2004 loss was truly the end of the beginning of the end for Tyrone Willingham in Notre Dame as his team went on to lose their last 3 that season before his firing. The loss in 2008 was in the early half of a terribly disappointing 3-5 finish to the season for the Irish.

This is the national ranking for passer rating by Pitt 5th year senior quarterback Tino Sunseri. No, that is not a typo.

Also the number of former Pitt Panthers currently enshrined in the Pro Football Hall of Fame---tied for second most for American colleges with Michigan and Ohio State (Notre Dame has 10, second only to USC's 11). After gaining one member per decade in the 70's (Joe Schmidt), 80's (Mike Ditka), and 90's (Tony Dorsett), the Panthers have added 5 players to the Hall of Fame this century: Dan Marino '05, Russ Grimm '10, Rickey Jackson '10, Curtis Martin '12, and Chris Doleman '12. 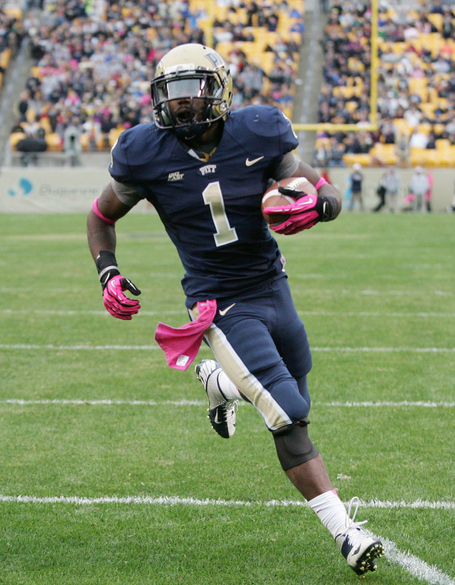 That is the number of years that Paul Chryst coached before landing his first head coaching gig this year with Pitt. Before coming to the Steel City, he was the OC at Wisconsin for 7 years and the OC at Oregon State for two years before that.

The senior is in his final season at Pitt with 2,851 career rushing yards and 28 touchdowns to date. He spent his first two seasons backing up Dion Lewis and last year missed the last quarter of the season because of injury. Now healthy, his production has slipped (4.64 YPC in '12 vs. 5.97 from '09-'11) and he's sharing carries with a true freshman behind a shaky offensive line, but Graham remains a dangerous runner and receiver.

Street continues the tradition of tall and athletic Pitt receivers. After a redshirt season in 2009 he's slowly become one of the better wideouts in the Big East. He's been bottled up by Notre Dame over the past two years (5 receptions for 63 yards) but he's totaled 50 catches and 695 yards with 4 touchdowns so far this season.

Nobody suffered more with the transition to the Todd Graham spread last season than Sunseri. He was completely a square peg in a round hole. After having a decent 2010 season as a first-time starter, he really regressed last year as a passer (2,616 yards, 10 TD, 11 INT) and faltered as a runner (154 attempts for 86 yards) while Pitt gave up the modern day record for sacks.

This season Sunseri has been playing outstanding with 2,199 yards, 69.2% accuracy, 13 touchdowns, and just 2 interceptions, while being one of the most productive quarterbacks in the country.

The fifth-year senior has been an all-Big East performer the past two seasons with a 1st-team nod last year after he racked up 67 tackles, 5 tackles for loss, 2 sacks, 1 interception, and 3 passes broken up. Holley is the leader of a strong Pitt secondary that is holding opponents under 200 yards passing per game.

The BYU game, sandwiched in between Stanford and Oklahoma, was the most trappy of trap games this season. However, post-Oklahoma and pre-USC the Irish have 3 games that are trap-like with this Pitt game being the toughest foe remaining and immediately following the high of a Norman victory.

There's been a lot of talk about Notre Dame playing too tight at home, especially young quarterback Everett Golson, so there will be a need to stay extra focused this week.

The Need for Blowout Wins

Brian Kelly isn't likely imparting to his players that they have to win by 40 points against Pittsburgh, but you have to wonder if in the back of his mind Kelly is thinking about racking up some beauty points over the next few weeks.

Does Kelly let the offense come out of its shell this week? Does the gameplan become a little more aggressive? Will Golson be called upon to run the ball even more, or possibly throw the ball 45 times in order to run up the score?

This doesn't seem likely, but there is a lot of outside pressure for Notre Dame to impress the country with a series of blowouts over the next three weeks.

Turnovers haven't been an issue like last year---praise Jesus---but you never know when they are going to jump up and bite a team. The Irish have literally done a complete reversal for 2012 currently sitting with just 10 turnovers (tied for 9th nationally) and a +10 turnover margin (tied for 8th nationally). Notre Dame is also on pace for TWICE as many turnovers forced as last season.

The logic is simple for Notre Dame---protect the football and a win will surely come.

2 Sides of the line

Pitt has a couple strong players, but the bulk of both of their lines are inexperienced and unproductive.

On offense the Panthers were hit by the injury bug when they lost senior right guard Ryan Schlieper for the season, and he'll be replaced by junior Arthur Doakes (6'6" 340) who will be making his first career start in addition to his first major playing time. The team did welcome back left guard Chris Jacobson (6'3" 295) for a 6th year after he missed all but the first 3 games last year with a knee injury, as well as returning center and 5th year player Ryan Turnley (6'6" 320). 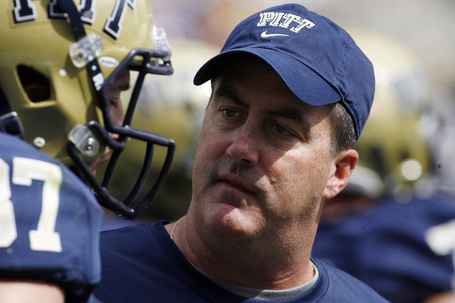 Not a great start for Crist in '12. Charles LeClaire/US Presswire

Pitt's offensive line is quite massive, but expect them to struggle against Notre Dame's stout front seven. This is a program that could not protect the quarterback last season and they are still struggling this year with 20 sacks allowed through 7 games (96th worst in sacks allowed per game).

Despite their talent at running back (boosted by true freshman Rushel Shell) and their new head coach's power running background, the Panthers have also been pretty pedestrian on the ground. They struggled last year (3.53 YPC) and are a little better this year with 3.87 YPC, but if you factor in all those runs by Sunseri from a year ago this 2012 running attack is just as bad if not worse. In fact, Pitt's top 3 backs averaged 5.05 YPC last year compared to just 4.79 YPC this season.

This is a line that is paving the way for just 150 yards a game on the ground (77th nationally), and the Panthers gained only 103 yards on 38 carries last season against Notre Dame. I'd expect Pitt to struggle to get 100 yards again this year.

On defense Pitt welcomes back junior Aaron Donald (6'0" 275) at defensive tackle a year after he garnered All-Big East and some All-American nominations as a true sophomore. He could be the best interior lineman Notre Dame faces all season and over his past 20 games as starter Donald has racked up 78 tackles, 24.5 tackles for loss, 14.5 sacks, plus 21 quarterback hurries.

Pitt is getting decent production out of their backups on the defensive line but they consist of a 5th year senior, two redshirt freshmen, and one true freshman---so not a whole lot of experience.

Overall, this appears to be a very average defensive line for Pitt. They're 43rd nationally in run defense giving up 141 yards per game, 57th in sacks with 16, and 53rd in tackles for loss with 47. They have pretty good size for a 4-3 scheme but they are in front of very small linebackers who weigh 215, 215, and 220 pounds respectively---not to mention they have two 'backers out with injuries. The Pitt line will have to do more than their fair share because the Irish offensive line and tight ends could have a field day blocking at the next level.

Pitt has a few things going for them in this game. First, they've recovered (to a degree) after their disastrous 0-2 start. Second, they have a few really good players on both sides of the ball. Third, they typically play Notre Dame tough.

Lastly, somehow Tino Sunseri is turning in a magical final season in Pittsburgh and coupled with good running backs and receivers, it makes you think Paul Chryst has something brewing in western Pennsylvania.

However, this is still a 4-4 team with mediocre stats across the board outside of quarterback play. If I told you that Tino Sunseri would be 8th in passer rating heading in to week 10, you'd probably think Pitt would be 7-1 or thereabouts.

Instead, this is a program that lost to a FCS team (Youngstown State), were handled decisively against their two toughest opponents (Cincinnati & Louisville), and struggled to beat---and were outgained by---a really dreadful Buffalo team a mere 2 weeks ago.

A team still adjusting and struggling to implement a new coach's system? Sure, but also a team that really lacks the meat and potatoes of a well-rounded quality squad.

In this game Pitt won't be able to stand up against Notre Dame's power running game and the Irish should more than contain the Panther's running game. Sunseri's productive season so far might allow Pitt to stay more balanced but I'm sure Notre Dame's defense will live with any plays he's able to make through the air because they will focus on shutting down their ground game.

I'm very interested to see if Brian Kelly tries to open up the offense this week. He seemed to hint as much this week after Irish quarterback Everett Golson took a major step forward on the road at Oklahoma. Notre Dame might have to be careful because Pitt has two really good safeties and quality secondary overall, so a ton of passing might not be prudent.

A ton of passing likely won't be needed though, just enough to keep Pitt's safeties honest and out of the box. I expect this to be a game where the Irish run the ball a lot, possibly turning up the tempo at times while utilizing Golson's legs to try and pile some points on the board.

This is the biggest mismatch we've seen in this rivalry in quite some time, but I don't think it will be a game that gets out of hand. The Panthers have just enough talent and experience to keep this one somewhat interesting.