On a rainy Saturday afternoon, Notre Dame defeated Stanford in overtime for the first time since 2008 with an improbable goal line stand.

Notre Dame made a statement on Saturday.

In my game preview I talked about how this Stanford team is full of physical kids who know how to win. A week ago they took Arizona to overtime and then swiftly buried the Wildcats---but this week that didn't happen to the Notre Dame.

The Fighting Irish stood in their way and made a statement to a rival that they will stand up to them and grab a victory when the game is on the line.

Let's break down each unit in the 20-13 victory over Stanford.

It was another great performance by this unit as they applied constant pressure on Stanford QB Josh Nunes and kept the Stanford running game in check all day.

Tuitt is certainly a beast, and his stats are tough to argue with, but Louis Nix literally cannot be blocked one-on-one and he constantly applies pressure and eats up blocks from the interior of the line. I don't want to say that Tuitt hogs all the spotlight nor doesn't deserve it, but Nix's job in the middle is so crucial for the success of this defense.

The coaching staff seemed to rely more on the starters this weekend (Day & Springmann held without a tackle, and just one tackle for Schwenke) but if so the 1's deserve a lot of credit for keeping their stamina up and dominating the final snaps in overtime. 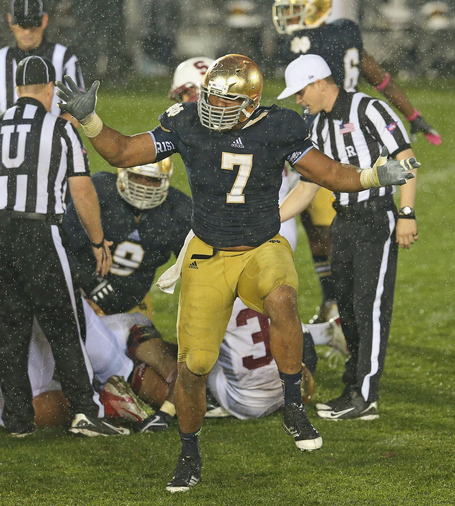 Needless to say that overtime goal line stand will go down in Irish lore, but it also was due to players outside the defensive line doing their job as well. Stanford was having some success running the ball at times, but they were unable to break any long runs while the Irish kept most of the rushes in front of them.

The Cardinal ended up with 147 yards on 3.86 yards per carry which just about where I thought they would be against this defenses. Stanford won't win many football games against good teams with that pedestrian rushing.

11 more tackles for Manti Te'o as he continues his quest as the best defensive player in America.

Without the benefit of a snap count, it seemed like Ishaq Williams and Ben Councell got a lot more playing time than usual. I actually saw Ishaq getting his face dirty on some plays so that's progress I guess. Still, Danny Spond finished with 6 tackles, got the bulk of the Dog linebacker snaps, and made a couple big plays.

I continue to be impressed with both Dan Fox and Carlo Calabrese as they combined for 11 tackles. To speak in a cliche, Calabrese is really 'playing within himself' as the hard hitting down hill middle linebacker. Fox has definitely raised his game this year and his blow up on that screen pass in overtime was positively Te'o-esque. In fact, I was sure it was Te'o until I saw that trademark long hair of Fox.

The defensive line made Nunes pretty skittish all game long, but the secondary played great in coverage. Opponents don't seem to be throwing towards Bennett Jackson much this year, but he made a great play dropping back in zone coverage to pick off a pass.

At this point we have to be considering Russell for freshman All-American status at corner, right? Maybe that's a little much but he is playing so well as a true freshman, particularly with his tackling. He's tipping balls, recovering quickly from mistakes, and plays physical beyond his size---he might be a truly special talent.

As a safety combo, this was the best game for Motta and Farley finishing with a combined 17 tackles. The award for Most Improved Player easily goes to Zeke Motta this year and in this game he laid some serious shots on Stanford players. A couple of those Stanford players have to be feeling the pain still because Zeke played downright angry on Saturday.

Farley picked up his first career interception and is no slouch when it comes to tackling, even flying off the edge to make a tackle for loss on Stepfan Taylor late in the game. He's the poster-child for RKG living.

Not a great performance by the offensive line, but they stood up and made some things happen. They paved the way enough to out-rush Stanford, and the Irish running backs finished with a healthy 132 yards on 27 carries. Almost 5 yards a pop on the Cardinal is pretty impressive and a huge upgrade over what we've seen in recent games against Stanford.

Take away the 4 sacks, the botched field goal, and that crappy exchange between with Riddick, while adding in Golson's running and the Irish put up 200 yards on the ground---that's a pretty good day in the office against a defense that was giving up nothing on the ground this year and it might be the best a team does against them this season outside of Oregon.

I know the line didn't block that well in the pass game. I know this, you know this, and we all know this.

Yet, a lot of that has to do with Stanford being a great (not just good, but great) pass rushing team, Golson being incredibly skittish, and Golson not making quick reads.

If Golson gets rid of the ball in the end zone and makes just a couple quicker reads to get rid of the ball, suddenly Notre Dame avoids a couple sacks, prevents the only Stanford touchdown, and likely takes advantage of the Cardinal's aggressiveness. Just a few smarter plays from the quarterback that didn't even need to be anything but simple incompletions and we're likely heaping a good amount of praise on the offensive line.

Tyler Eifert came through with a collection of clutch catches finishing with 4 receptions, 57 yards, and a touchdown. He's still an All-American and proved why on that first Irish score.

However, this game will be remembered by the struggles in pass blocking by Troy Niklas. On the one hand I'm not that surprised that he was abused by the likes of Chase Thomas, but we're all a little puzzled as to why he was left alone against such talent in the first place for so many snaps.

My guess is that after his dominating performance against Miami, the coaching staff believed Niklas was ready for the challenge. As it turned out, they were wrong, but Kelly did mention that Golson needed to get rid of the ball and he's right.

I feel like a broken record but the passing game simply is not prolific enough to say a whole lot about the receivers. The numbers for this unit, barring several prolific passing performances down the stretch, is going to be very Holtzian and we're almost guaranteed to have the first season without a 1,000 yard receiver since 2007. 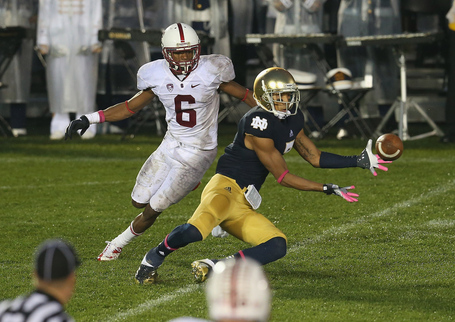 Jones reaching back for the game-winning TD. Johnathan Daniel/Getty Images

With that said, TJ Jones is really playing well this season. His numbers aren't great and largely no different than last year, but he's coming up with so many clutch catches and added a few more this Saturday. I really think the fact that he's not being targeted a whole lot (like all the receivers) and isn't any dropping balls is what is making him look a lot better this season. When the ball is thrown Jones' way he's making plays and he did just that on a tremendous adjustment for the game-winning touchdown.

I was quite proud of the way the running backs played and I'll join the mob in saying they should have been fed the ball a lot more, especially in the first half. Only one rush (for -1 yard) went for negative yardage, which is impressive against Stanford.

In fact, I think the offense would have had much more success if they stuck to pounding the ball up the middle. Chalk that up to the coaching staff psyching itself again.

I'll also join the mob in affirming that Cierre Wood needs to get the ball more.

Theo Riddick does catch the ball better than any of the other backs, and I know only he could have made that clutch catch down the sideline on a throw to his back shoulder from Rees. I also know that this utility is highly valued by Kelly as Riddick is motioned out wide on probably a quarter of his snaps. In fact, Riddick leads the whole TEAM with 20 receptions and Kelly just does not want to take that value off the field.

However, Wood is proving to be too good to be treated with backup snaps. Theo dances a little too much, and while he does run tough by putting his head down a lot, he does so with a lack of vision in tight spaces with the amount of times he's tripped up heavily outweighing the yardage he grinds out. Truth be told, no one on the roster works in tight spaces, slips through cracks, and runs harder than Wood.

It's at the point where Wood has almost as many yards rushing as Riddick on nearly half the carries. And it's not like Wood is a slouch as a receiver either. Sure his hands aren't the greatest but he's got more big-play ability with the ball in his hands than Riddick.

The coaches are going to have to look long and hard about playing Riddick so much and question whether those 1 or 2 receptions per game from the running back position are more important than keeping a more dynamic runner from getting more carries and boosting the running game.

The ups and downs continue with Everett Golson.

The three major problems for EG were fumbling, lack of quick decision making, and lack of poise in the pocket.

Due to the weather and conditions the fumbles can be excused to a point, but it's really all about decision making. The first fumble from under center may have been caused by the rain, who knows, but his fumble sack and turnover after a long run are directly tied to bad decision making.

Get the ball out quicker and get out of bounds---it's just that simple.

As bad as Golson's skittishness in the pocket was it his lack of quick decision making in the passing game that really put handcuffs on the offense for stretches of this game. He'll learn as he gets more experience but if a team is constantly blitzing the ball needs to get out quickly against favorable one-on-one matchups with the receivers and tight ends.

As bad as Golson played, let's remember he did compose himself, threw a beautiful touchdown to take back the momentum and made a lot of plays with his feet.

And then there's this...

That's an awfully good way to an end a football game for both quarterbacks.

As I said in the quick recap on Saturday night, this really feels like Tommy Rees was born to play the steady and steely-eyed backup. At worst, he's settling into the role quite well.

There's something to be said for his lack of skills, weak arm, and inaccuracy, but there's a lot more to be said for his temperament as a leader and as a quarterback that can play within the system and make some tough throws in a pinch.

Going 4 for 4 down the stretch after sitting in the cold rain is damn impressive, as was his reaction after throwing the game-winning touchdown.