The Irish shook off the shackles of Tressel Ball and put up a lot of yards against the Hurricanes, but is it too early to say the offense is fixed?

Share All sharing options for: Miami Review: The Education of Everett Golson Continues

Last year, Brian Kelly used the bye week to go on a cross-country PR tour before leading the team to a flat performance against USC in a game marked by shiny new helmets, Crazy Train, seemingly every single recruit in the country, and the first night game at Notre Dame Stadium in quite some time - in other words, probably too many unneeded distractions.

This year was a little different. The young Irish offense was struggling mightily to move the ball and it looked like the offense was trending more towards Tressel Ball and away from any kind of high-powered spread. As I said two weeks ago:

The bye week couldn't have come at a better time. Kelly and Chuck Martin can sit down together and evaluate the offense. The offensive line can spend some quality time with Harry Hiestand and go over the finer points of his zone blocking scheme. And Everett Golson can spend a little more time in the film room going over his mistakes.

There's still a lot of potential in this offense and things will hopefully start to click soon.

And looking at the results, it seems like quite a few kinks were worked out.

For the first time all season, we actually LOOKED like a spread offense. Outside of some third and longs and the fourth quarter when Kelly was killing the clock, Golson spent most of the game in the shotgun. The tight ends - Tyler Eifert in particular - mostly lined up flexed out as H-backs instead of attached to the line. And the process of lining up and getting the play called was probably the smoothest it's been all season.

In addition to the whole operation humming along, Kelly and Martin opened up the playbook for Golson a little bit.

Let's go to the tape:

This play isn't dramatically different from an outside zone read. The backside defensive end is left unblocked and read by the quarterback. If he charges down the line, the QB will keep the ball; if he doesn't, the QB will hand it off. The only difference is that the line blocks for an inside zone instead of an outside zone.

But the interesting player to watch is the tight end lined up in the backfield. Recall how Kelly has been using that tight end on inside zone plays: 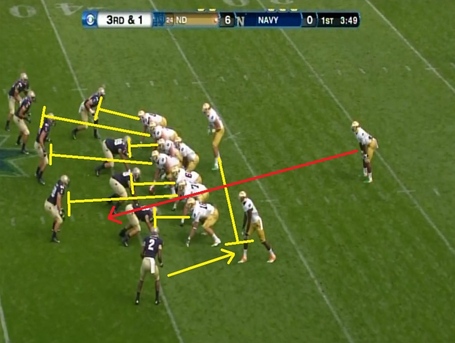 He starts out on the play side but goes across the formation to block a backside defender.

Now look at how he's used in the inside zone read: 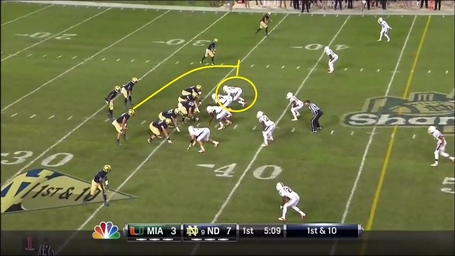 But that's not all. Also for the first time since Kelly arrived, I saw the Irish use play action off of the outside zone read.

Notre Dame ran this play twice. The other time was when they were backed up against their goal line and Golson threw an incompletion. NBC's cameras remained focused on Golson so it's impossible to tell what happened on that play. 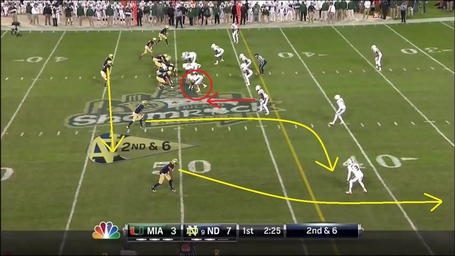 Just like in a normal zone read, Golson reads the backside defensive end. He mostly stays on Golson, but I'm guessing there's a little more leeway in this read. He doesn't charge at Golson so he pulls the ball. He's flat-footed when Golson takes off, so he's not much of a threat to get a sack.

From there, it's a simple high-low read. Robby Toma runs an out route while TJ Jones goes deep. The linebacker covering Toma bites on the play fake and Toma is wide open for an easy completion.

Finally, we saw the return of the packaged plays.

I wrote about Notre Dame's use of the stick/draw packaged play before the season started and it looks like the coaches are expanding on this concept.

Here's a play where a tunnel screen to the right is packaged with a swing pass to the left.

It's hard to tell what the read is on this play, but I would guess it's the middle linebacker who bailed back into coverage. Golson probably would have been fine with either choice but I would guess the swing pass was the first option so that's what he threw.

Also, on Troy Niklas's lone reception of the game, it's possible that play was a stick/draw package. The play was run out of an empty backfield so it's impossible to tell if Golson would have tucked it on a draw if Niklas hadn't been open, though. But the play was run on 3rd and 2, and the stick/draw is made for that situation, especially when you can run it out of an empty backfield with five receivers.

So those were the schematic changes we saw last week, but running a few inside zone reads isn't why we ran for almost 400 yards against the Hurricanes. After being plagued by missed blocks and blown assignments the previous three weeks, the Irish offensive line did a much better job in the run game. Yes, Miami's defense is horrible, and, yes, that probably made the offense look better than it was, but it's nice to see the linemen push around a defense at a BCS school as opposed to an undersized Navy defense.

Let's look at a few plays.

The first play is Cierre Wood's almost-TD run that set the tone for the second half. 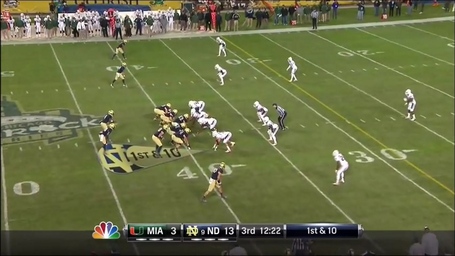 The Irish are lined up with Niklas as the H-back and Eifert split out wide to the right. Miami isn't exactly stacking the box like Purdue and Michigan did against the Irish with both safeties playing pretty deep. 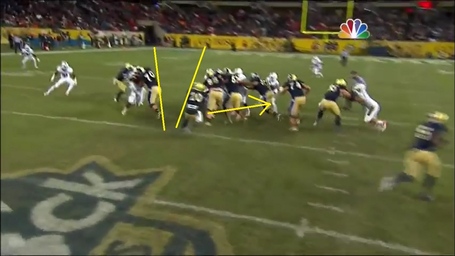 What I like about this play is the way it highlights Wood's superb vision. Right here, Wood is already starting to cut back even though it looks like there's a gaping hole in front of him. 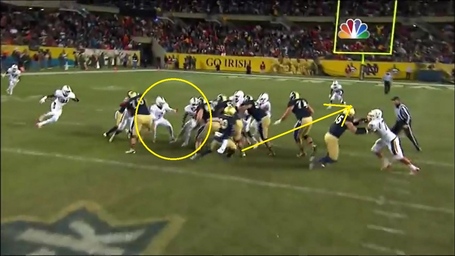 Suddenly that hole is gone, but it doesn't matter because Cierre has already changed directions. Whether he knew that hole was closing or not, it's still a good play. Niklas, Lombard, and Golic create a nice lane and it's off to the races.

This next play is one of those sideways pitch plays that worked so well against Purdue. 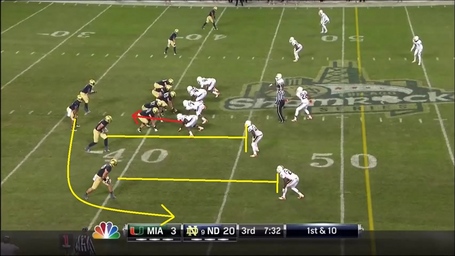 Both Niklas and Eifert are split out wide to the right. At the snap, the playside defensive end is left unblocked. This play compliments the zone read nicely because that end would be unblocked on a zone read play with this alignment. He instinctively freezes and is already out of the play. 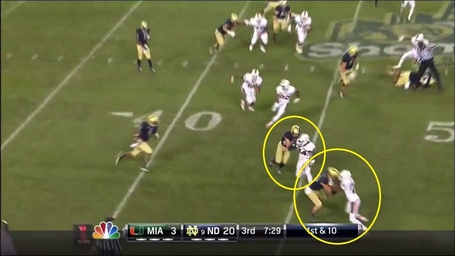 The Miami defense is spread out again, but the safety comes on a blitz up the middle. The run goes outside, so the blitz does nothing. The tight ends provide some nice blocks and the safety takes a horrible angle on George Atkinson, who uses his speed for a nice gain.

This play has worked often for the Irish, but they'll need to run some other plays or throw the ball out of this formation to keep from telegraphing it. Unfortunately, I don't know how often they line up like that (Eifert and Niklas split wide) so I don't know if they already do or not. 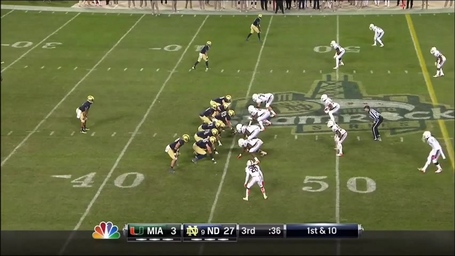 The Irish are lined up under center with two tight ends to the right. Miami still doesn't seem interested in stopping the run despite getting gashed on two straight possessions. 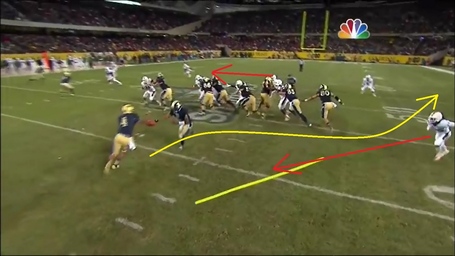 The play call is an outside zone to the left, but you can see how badly Miami overran this play. The linebackers don't even try to keep contain, and, making matters worse, the corner comes on a blitz that does nothing. Atkinson cuts it back and gets nice blocks by Eifert and Lombard before outracing everyone to the endzone.

The offensive outburst against the Hurricanes was a welcome sight after spending the bye week worrying if we would have any offense at all the rest of the season. If was a great effort by everyone involved - Golson kept the chains moving through the air, the offensive linemen did a much better job blocking, and the running backs did a great job reading their blocks.

The signs are pointing back up for the offense, but Irish fans might want to pump their brakes a bit if they have visions of 40-point games the rest of the season. This Miami defense is bad. Very, very bad. Obviously I didn't expect almost 400 yards rushing, but it would have been discouraging if the Irish hadn't torched them.

But there are plenty of good signs.

First, Irish fans everywhere have to be happy with Golson's performance. 17/22 with 8.5 yards per attempt are very nice numbers. It was nice to see him shake off his performance against Michigan.

Second, shoving an undersized Navy team up and down the field is one thing, but physically dominating a BCS conference team's defense is another. Again, yes, Miami's defense - particularly their rush defense - is terrible, but running for 376 yards at 7.4 yards per carry doesn't happen on accident.

Third, I can't say enough about the game Troy Niklas had. He was a battering ram in the run game. Here he is blocking three(!) Miami defenders on Theo Riddick's touchdown run: 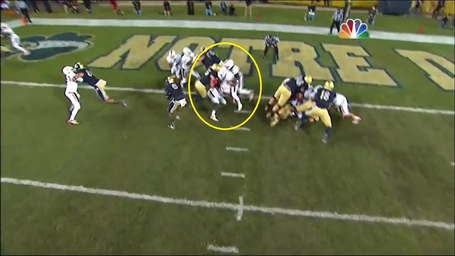 As this offense matures, he will be a dangerous weapon in play action.

Everyone should be happy about the way the offense performed last weekend, but now it's time to go out and do that against Stanford.