Yeah, I know - the bowl game was two weeks ago. I'd like to say I spent the time since the game going over the game in great detail and have an awesome breakdown for you guys, but that's not really case. Call it apathy, call it burnout, call it whatever, but I just decided to drag my feet on this breakdown for whatever reason.

As far as the offense goes, there's not much I can say that hasn't been said already. Rees didn't play well, Hendrix should have played more, our receivers dropped some critical passes, and we couldn't move the ball when we had to. Put that all together, and that's how you end up with seven offensive points.

So let's talk about the defense, specifically how Florida State was able to get back into the game despite being dominated up front all night.

I'm sure all Irish fans would agree that the defense in the first half was a lot of fun to watch. EJ Manuel didn't have time to set his feet every time he dropped back and Aaron Lynch and Jamoris Slaughter played maybe the best football of their careers.

The big key to Notre Dame's early success defensively was Florida State's young offensive line. By my count, Bob Diaco called eight blitzes in the first half, which is a lot considering he usually calls a fairly conservative game. The offensive line had a really tough time picking up those blitzes.

Here's a play from the first quarter. 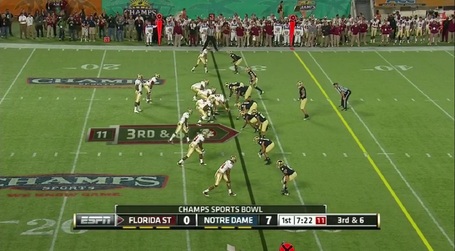 Florida State is in the shotgun on third down. Notre Dame has their pass rush package in, with Prince Shembo, Lynch, Stephon Tuitt, and Darius Fleming as the down linemen. The defensive backs show man coverage with, presumably, one of the safeties playing deep off-screen. 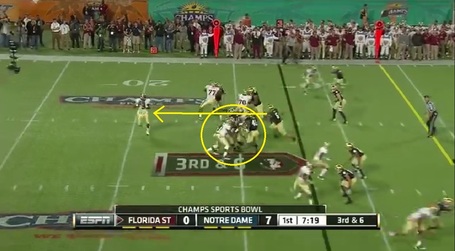 Diaco is simply going to bring Manti Te'o on the blitz right up the middle. Three of the linemen slide over to block Lynch and Fleming, opening up a gaping hole for Te'o to run through. 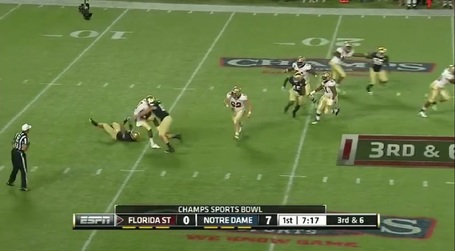 Lynch also beats his block and meets Te'o at Manuel for the sack. Yes, there were three linemen right in front of Lynch and he beat them all. The Seminoles simply could not block Aaron Lynch.

The other issue the Florida State offensive line had was just getting lined up properly.

Here's a play from the second quarter. 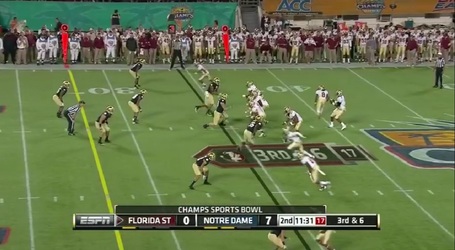 FSU is in the shotgun on another third down. 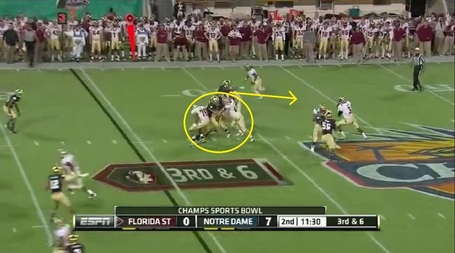 Lou Holtz pointed out this play at halftime. The tackles both line up too far outside. Notre Dame is only rushing three men, but Stephon Tuitt and Prince Shembo both end up one-on-one with the tackles. Meanwhile, Lynch is double teamed by the center and right guard while the left guard stands there blocking no one. 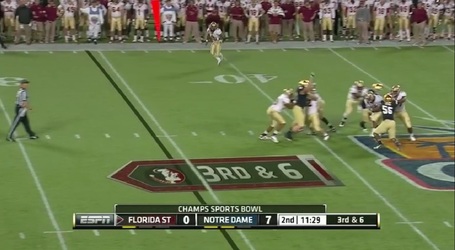 Tuitt bull-rushes his man and gets the sack.

At halftime, the Irish were pitching a shutout and kept the Seminoles from stringing anything together offensively. Then in the second half, Florida State puts together a few long drives and rings up 18 unanswered points. What happened?

Second, Jimbo Fisher put Manuel in the shotgun almost exclusively. Florida State lined up in the I-formation frequently in the first half. They couldn't establish any kind of a running game and the line simply couldn't pass protect long enough to execute five step drops. Playing from the shotgun put Manuel deeper in the pocket and forced the pass rush to go farther to get to the quarterback. Notre Dame was able to collapse the pocket fairly consistently, but the line play improved from awful to adequate, and that was enough for Manuel to find open receivers.

Notre Dame also made some questionable defensive adjustments of their own. After blitzing eight times in the first half, Diaco only called three blitzes in the second half, and two of those came late in the fourth quarter when the Irish were desperate for a stop.

I don't know for sure what the reasoning behind this was. Maybe Diaco and Kelly decided to be more conservative in the second half since they had the lead. Maybe with Florida State spreading out the defense by going four-wide, they worried about the DB's getting beat and wanted to keep extra players back.

But either way, with time to pass finally, Jimbo Fisher and EJ Manuel went to work on the Irish defense.

For the most part, the Irish played a zone defense throughout the game. Sometimes they played a little too passive, and that cost them. 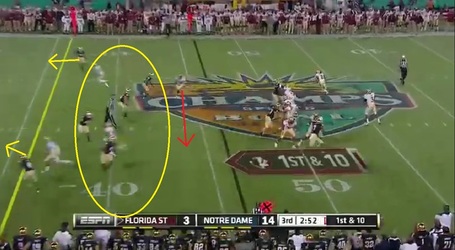 In this play, Notre Dame is only rushing the three down linemen. The linebackers are playing an underneath zone. It looks like the two corners are staying on the two outside receivers, and the safeties are back deep, probably to help the corners.

The linebackers play a little too deep, though. Florida State simply ran three men deep and then brought another receiver across on a drag route. 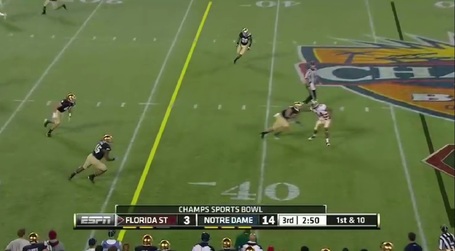 Look how deep Fleming and Dan Fox are. Te'o comes up to make the tackle, but not after a five yard gain.

This was not an isolated incident. Those underneath routes were open constantly the entire second half. Every time, the formula was the same: The receivers would run deep, and a running back or another receiver would slip out underneath and pick up an easy five yards.

But when Notre Dame decided to come up and play man coverage, the Seminoles beat them deep. 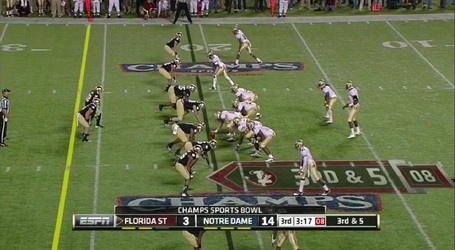 Here's Florida State in the shotgun again. Notre Dame has the pass rush package in again on third down. The DB's are playing only a yard off the line. It looks like Gary Gray and Slaughter are playing to the boundary side with Robert Blanton and (possibly) Bennett Jackson to the field side. Te'o is the middle of the field with Harrison Smith creeping down right before the snap. 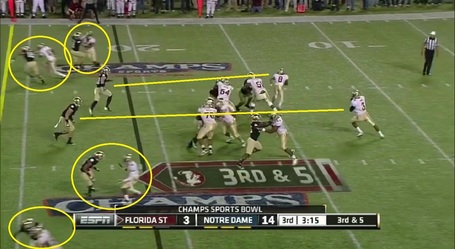 Te'o spies Manuel and Hayseed covers the running back. This leaves five men to cover four receivers - everyone is in man coverage with Zeke Motta playing a deep zone. 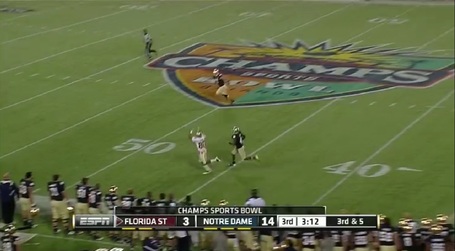 Gray gets beat and the receiver makes an outstanding catch.

That's what Florida State did in the second half - run everyone deep and hit the underneath guy if Notre Dame is in a zone or throw it deep if it's man coverage. Diaco stopped calling blitzes and the defense never knocked Manuel off his rhythm.

Despite all that, I can't really pin this loss on the defense. Florida State had less than 300 yards of offense, ran for only 41 yards, and only scored 18 points. Yeah, maybe Diaco should have kept blitzing and maybe the defense was too conservative in the second half, but a performance like that should be more than enough to win. The problem was, of course, on the offensive side of the ball, but I think we've beaten that topic into the ground already.

There are plenty of good things to take away from this game. The line looked absolutely dominant. I don't care if Florida State had four true freshmen playing on the line, I honestly think Alabama would have had difficulty blocking Aaron Lynch that night. Jamoris Slaughter showed what kind of playmaker he is at the nickel back. It will be interesting to see where/how the coaching staff plays him next year. And finally, Te'o was all over the field, but I guess that's nothing unusual.

We can moan and complain about the outcome of the game, but if Notre Dame had gotten decent quarterback play in that game, they could have easily won by two or three touchdowns. We're not that far off from being a very good team. Give it time - it'll happen.