USF Review: Our O-Line is Awesome

Share All sharing options for: USF Review: Our O-Line is Awesome

So the big story from Saturday was turnovers and dropped passes and Dayne Crist and Tommy Rees and Kelly yelling himself to a nice shade of puce.  But Irish fans should be paying attention to the play of the offensive line.  Four starters came back with the new guy being our top reserve last season.  There was talk of Kelly putting a lot of work into the running game during spring and fall camp and it showed on the field.

I don't think anyone was exactly sure what kind of offense Kelly would run with Crist as the starter, but to my relief, Crist came out basically running the Tommy Rees Offense at a slightly faster pace.  There were no zone reads and Crist even went under center a few times.  Without turning this into a quarterback discussion, the early game plan called for a healthy dose of running the ball with little being asked of Crist throwing it.  That obviously changed as the game went on, but I'm not here to discuss that.

There were two things I noticed.  First, the Irish ran a lot of zone plays, both inside and outside; probably more than they ran in any one game last year.  Second, Kelly used a fair amount of two tight end sets.  The offensive line responded by opening up big holes for Cierre Wood to pick up huge chunks of yards to the tune of 104 yards at 5 a carry.*

So let's look at a play that combines those two points: an outside zone play run out of a two tight end set.

*Basically everything I wrote in this paragraph refers to the first half when Kelly was still sticking to his game plan.  When Rees came in, Kelly pretty much abandoned the run game in order to catch up to the Bulls. 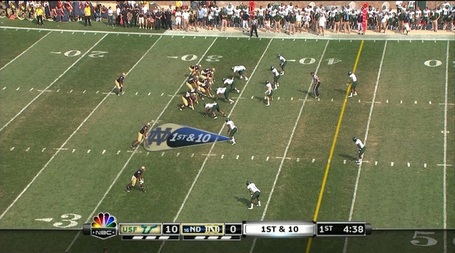 The Irish line up with Tyler Eifert and Mike Ragone lined up to the boundary side.  Eifert is on the line and Ragone is back a bit.  Crist is under center with Jonas Gray in the backfield. 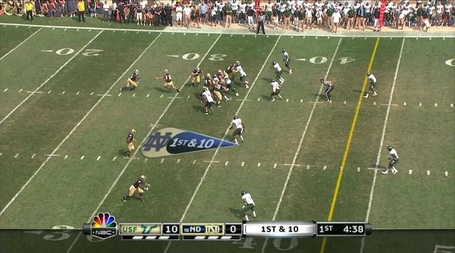 ND runs a zone play to the strong side, so the line begins to flow towards the sideline.  Ragone cuts across the formation to block the unblocked defensive end.  You can see Floyd in the slot getting in position for the bubble screen. 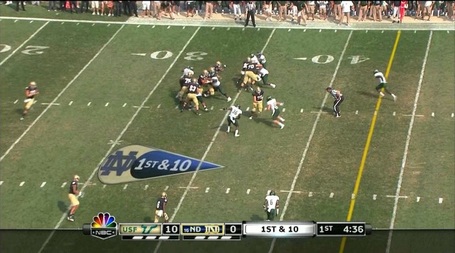 Look at the blocks.  Zach Martin and Eifert do their job and block the defensive end into two linebackers.  Chris Watt and Braxton Cave seal off the other side and Taylor Dever is able to get the middle linebacker.  Gray is able to pick up nine easy yards.

There are numerous examples of the line working its magic.  You just need to look at basically any of Wood's carries.  Here's Dever and Trevor Robinson opening a huge hole for Wood: 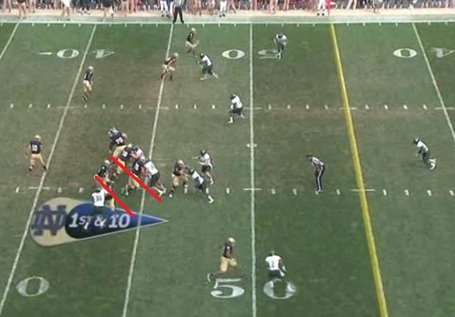 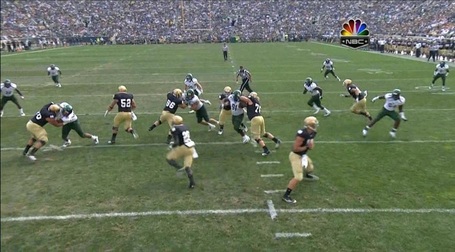 That's the kind of hole running backs dream of.

I'm being serious when I say it's hard to find fault in the run blocking this line did on Saturday.  I can think of one play where Dever got beat when a lineman slanted hard in the direction of the run and Dever couldn't do anything and maybe a few plays were the line didn't get a very good push.  Dever had a tough day in pass protection, but he was fine last season so I think he just had an off day.

I think this is one big reason we shouldn't give up on this season.  Quarterback play may not be what we want it to be (is strange to think Jimmy Clausen may have spoiled us?) but if the running game is clicking like it did against USF and as long as Michael Floyd and Tyler Eifert are catching balls for us, it may not need to be.