Rolling Out and the Purdue Boilermakers

Share All sharing options for: Rolling Out and the Purdue Boilermakers

So let me preface this preview by letting everyone know I haven't watched a second of Purdue football this season.  I didn't watch any of their games live and none of them are available online.  My scouting only consisted of watching our opening game against them last season.  Even though it was like a fricking million years ago, Purdue hasn't changed their staff so I doubt they're doing anything dramatically different than last year.  I watched some highlights from their games and nothing jumped out at me in the handful of plays I saw.

When people think of Purdue, they probably remember the "Basketball On Grass" teams under Joe Tiller in early part of the century when they brought the spread to the Big 10.  But things have changed in the past several years.  Purdue runs a bit of an odd system nowadays.  They use a lot of spread sets but they also sometimes put a fullback in the backfield and run out of the I-formation.

Against the Irish, Robert Marve played quarterback for the Boilermakers in his first action since 2008.  He's capable of picking up yards with his legs, but Purdue didn't use him as a runner.  Instead, they rolled him out a lot to take advantage of his athleticism, giving him a run-pass option*.

Here's an example of one of those roll-outs. 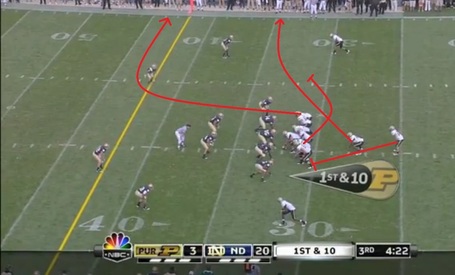 Whenever Purdue rolled Marve out, they always pulled the backside guard to give him a blocker on the edge.  Here, Marve is going to fake the handoff and the fullback will release to the flat.  The tight end will also run an out route just past the first down line, creating an easy high-low read. 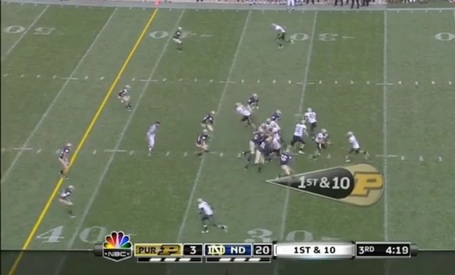 Here's the play action.  The movement of the fullback and guard make the play look a lot like a Power O run, but the tight end is releasing downfield and the fullback is angling towards the sidelines. 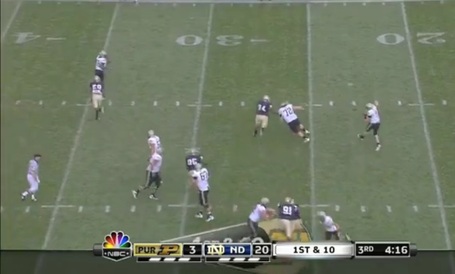 Brian Smith freezes on the play action and is late covering the fullback.  Marve makes the easy throw and picks up 14 yards.

Here's another example, this time with only a single back in the backfield. 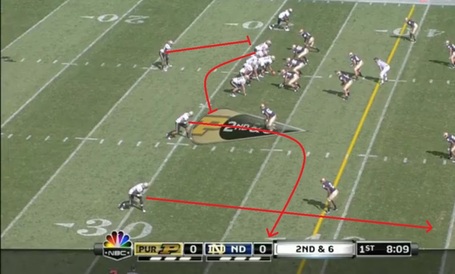 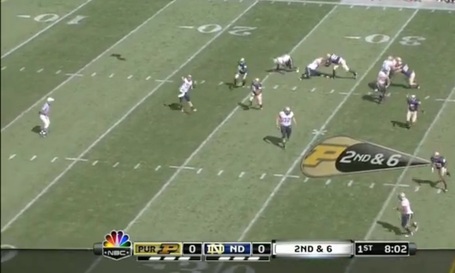 It's the same story as before - the linebacker doesn't follow the receiver until it's too late, making things very easy for Marve.

All of that rolling out sets the Boilermakers up for a counter.  With the defense starting to flow towards the rollout, Purdue hit the Irish with a sprint draw. 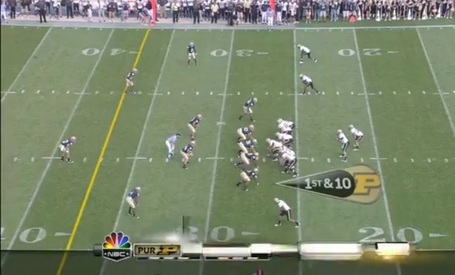 Marve starts out in the shotgun. 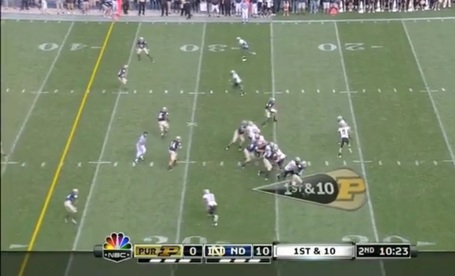 There's no pulling guard, but Marve heads outside the pocket with the running back acting like a blocker. 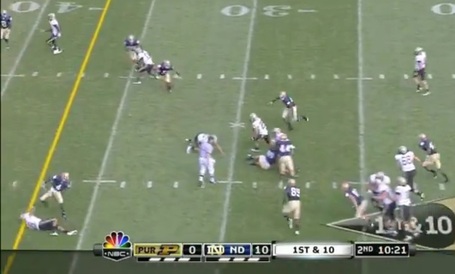 After taking a few steps, the running back stops, runs the other way, and takes the handoff from Marve.  With the defense running the other way, there's a big hole for him to run through.  (This is a play Notre Dame runs fairly often.)

The rollout is a useful tool when facing a team getting penetration into the backfield.  The Irish did a good job of harassing Marve and pushing around the Boilermaker offensive line.  Rolling out neutralizes that advantage by running away from the pass rush.  It also simplifies the offense for the quarterback by cutting the field in half and puts him out on the edge if he wants to take off running.

Robert Marve won't be the starting quarterback when the Boilermakers take the field on Saturday.  That job falls on Caleb TerBush, but Marve is expected to play significant minutes, too.  I wouldn't expect to see anything radically different than we saw in Notre Dame Stadium a little more than a year ago.  In fact, when I was watching highlights of one of Purdue's  games, I noticed they scored a touchdown on one of these rollouts, so it's still in the playbook.

So that's really all I know about Purdue.  Justin Siller and Antavias Edison are Purdue's best receivers statistically and TerBush is third on the team in carries, so I suspect we'll see him keep the ball occasionally.  They average almost 260 yards rushing a game, so they like to keep the ball on the ground, which is good news for an Irish defense that is eating running backs alive this season.

I may not know much about the Boilermakers, but I do know they lost to Rice and there's no way the Irish are transitively worse than the Rice Owls, so I feel pretty good about Notre Dame's chances in this game.