Share All sharing options for: Pitt Review: Stopping Michael Floyd, or How Tommy Rees Learned to Stop Worrying and Love the Tight End

The Pitt game was sloppy, annoying, boring, and not fun to watch at all.  But this game actually involved a very interesting back and forth, cat and mouse game between Brian Kelly and Todd Graham.

All season, Brian Kelly has been moving Michael Floyd around, lining him up at every conceivable wide receiver position to keep opposing teams from keying in on him and to isolate him either on a corner outside or on a linebacker inside.  And this plan worked quite well: after three games, Floyd was second in the nation in receptions and yards.

Early in the game against Pitt, Kelly had Floyd line up mostly in the slot, hoping Pitt would try to cover him with a linebacker.  Instead, Pitt made it their goal to take Floyd out of the game completely.  In the first half, no matter where Floyd lined up, Pitt almost always put a man on press coverage on him to  jam him at the line.  If Floyd got past the jam, the safety would help over the top.

Here's a third down play where you can see the double team. 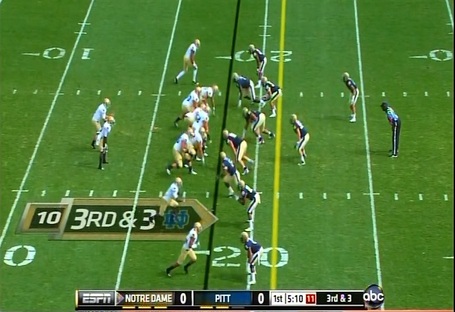 It's third and short, so Pitt is playing everyone close.  The safety isn't playing right over Floyd... 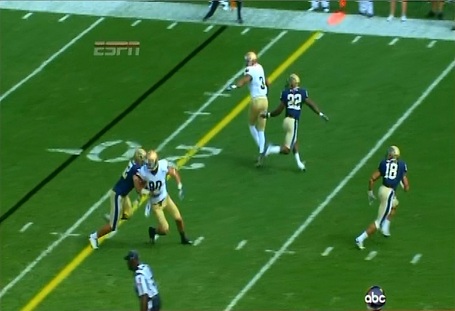 ...but as soon as Rees looks his way, he takes off in that direction.

That was Pitt's game plan for basically the entire first half.

Kelly responded in two ways.  First, he tried to punish Pitt for bringing down that safety and leaving a void deep.

Here's a play from late in the second quarter. 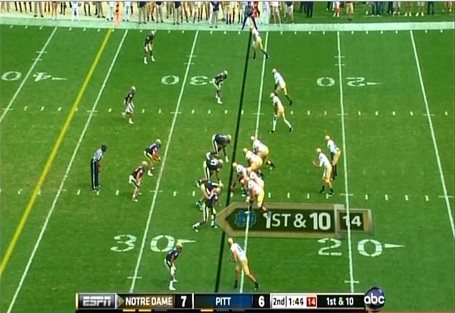 Floyd is lined up in the slot again with Theo Riddick and T.J. Jones out with him.  You can see the safety already creeping down. 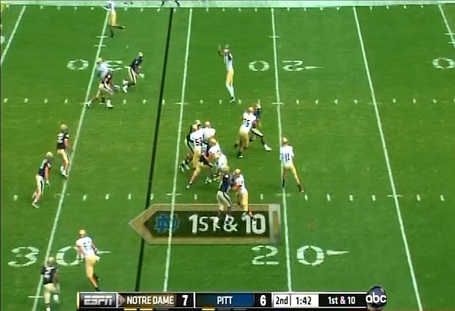 At the snap, the linebacker on Riddick slides over to cover Floyd and the safety bites on the bubble screen.  Riddick slips by and has a lot of green in front of him. 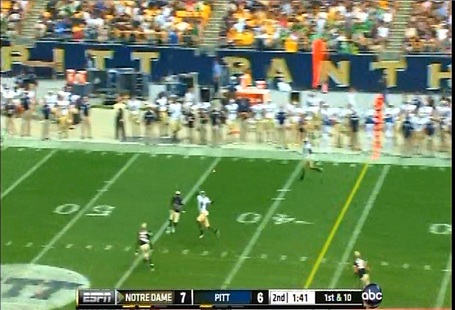 Rees pump fakes on the bubble screen and hesitates ever so slightly before throwing it to Riddick.  He was still open, but Rees sails it over his head.  A quicker throw and Riddick could have picked up a lot of yards.

The other adjustment Kelly made was to simply shove Floyd off to the side, run plays out of trips formations, and play ten on nine to one side of the field.  This cut the field in half and gave Rees some simple reads.  This is why Rees started spreading the ball around and led that drive that ended with the missed field goal.  He couldn't force it to Floyd because Floyd essentially wasn't in the play.

With the trips formations forcing Pitt into zone coverage and Kelly uninterested in even trying to throw to Floyd, Graham responded by having his defense play a simple Cover 2 zone but shade one safety over to Floyd's side.  They changed up the way they presented their defense to keep Rees off balance, but the coverage was almost always the same Cover 2 in the second half.  This took away the advantage Notre Dame got by putting Floyd by himself on one side and daring Pitt to keep doubling him.  Predictably, the Irish had trouble moving the ball on their first drive of the third quarter.

But with Pitt playing a base defense with little variation, Kelly went to work.  Kelly began to call plays specifically designed to beat Cover 2 defenses, and the offense responded with a ten play drive that got derailed by penalties, and an 85 yard touchdown drive.  Let's look at some of these plays.

The first play is "four verticals." 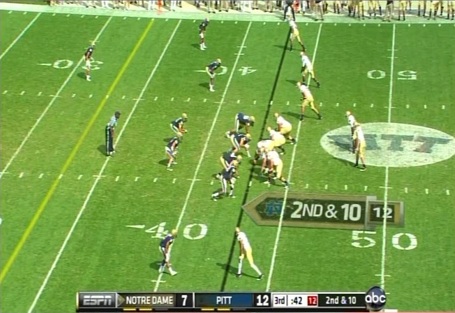 The Irish line up with trips right and Floyd all alone to the left.

Four verticals isn't always a deep pass play; it doesn't send all receivers deep (though it can).  Depending on the coverage, the receivers may cut in or sit in a zone.  The idea is to draw the defense deep and force the safeties to make a play.  With four receivers in the safeties' zone, someone will get open. 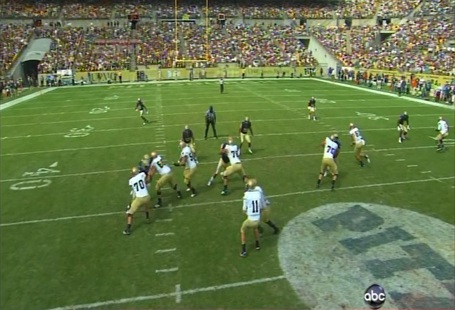 You can see the safety on the left already moving towards Floyd, but watch Tyler Eifert - the linebackers froze on the play action and the middle of the field is wide open. 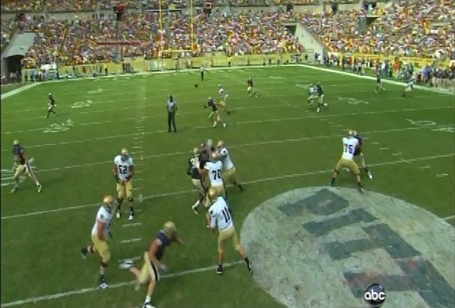 Rees waits until he clears the linebackers and delivers a perfect strike.  The safety that might have been there to cover him is too busy watching Floyd.  Unfortunately, this play was called back due to a personal foul.

Pitt then responded by ditching the double team on Floyd, but still didn't go away from the Cover 2.  On the final drive, Rees started to pick the Pitt defense apart. 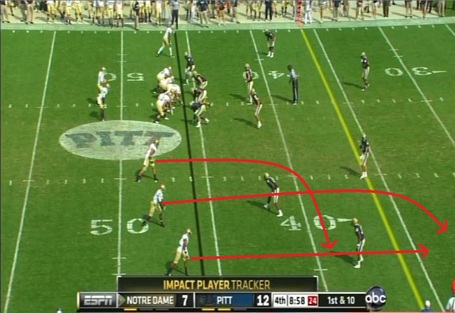 This next play is a "levels" concept, an excellent play against zone.  A zone defense typically has two "levels" of defenders, the four or five defenders in short to intermediate zones and then the two deep safeties.  The levels concept attacks this by combining routes that create three levels of receivers.  With only two levels of defenders, someone will be open. Usually, the safety will move over to cover the deep route, but that still leaves the flat defender in a high-low bind.  No matter what he chooses, someone will be open. 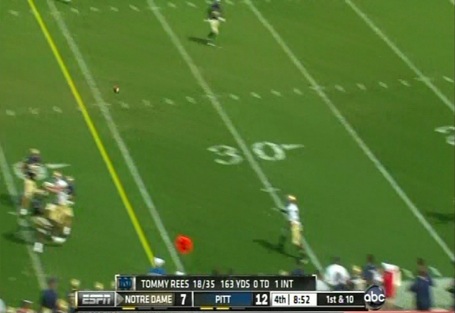 Sure enough, Rees finds Riddick wide open.  It's a little blurry, but you can see the crowd Eifert drew.  There are three men covering him and no one on Theo.

Finally, here's the play the Irish used to get into the red zone. 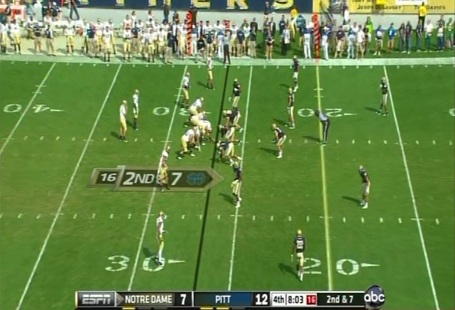 This time, the Irish line up in a 2x2 set and run "three verticals."  It's exactly like four verticals except with three deep routes and one route into the flat as a checkdown.  It offers the same benefits as four verticals against a Cover 2 zone, though. 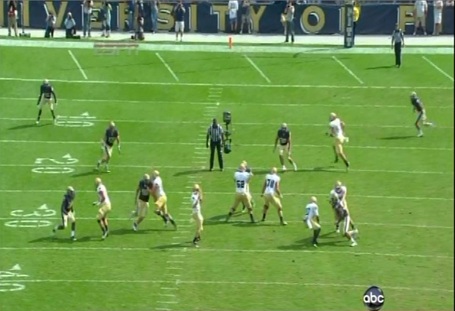 Just like before, Eifert runs into the void behind the linebackers and between the safeties. 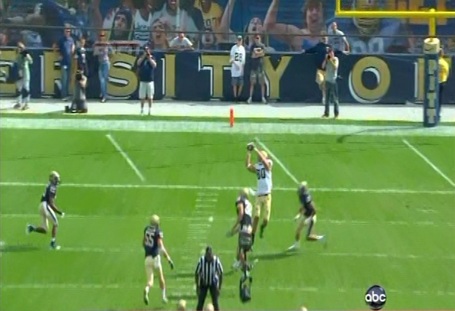 Eifert wasn't quite as wide open as before, so Rees throws it a little high to get it above the linebacker and in a place where only Eifert could catch it.  Two plays later, Rees would throw the winning touchdown pass.

So that's a rundown on how Pitt attacked the Notre Dame offense and how Kelly responded.  As ugly as the game was, Notre Dame did not get out-coached.  Kelly made the necessary adjustments; the team just had trouble executing.  The offensive line wasn't opening up holes for the running backs like it did earlier in the season and Rees kept locking onto one receiver.

It's a little telling about Rees's ability to read defenses that Kelly had to take Floyd completely out of the offense to keep Rees from focusing on him.  The debate over Tommy Rees has been raging for weeks now, so I won't go into it further, but I hope Kelly can turn this game into a learning experience and teach Tommy it's ok to throw to other receivers.