The Spread Offense and the Pitt Panthers

Share All sharing options for: The Spread Offense and the Pitt Panthers

Notre Dame fans know the type of problems that can come up when a quarterback recruited for a pro-style offense is put into a spread system.  Pitt's quarterback, Tino Sunseri, reminds me a lot of Dayne Crist.  He's an athletic player who can move around a little bit, but at the end of the day, he's more comfortable sitting in the pocket than getting out on the edge.

But the Pitt coaches are committed to their style of play and do the best they can with the personnel available to them.  Lucky for them, they have some tall playmakers at receiver and a fantastic running back in Ray Graham.  Here, I'll talk about how the Panthers employ Sunseri in their spread and how they get the ball in Graham's hands.

One key concept of the spread offense is the zone read.  Spread teams have difficulty executing power run plays since so many plays are based out of three or four wide sets, so spread teams typically employ a lot of misdirection and option plays.  The zone read gets the quarterback involved in the run game and allows him to decide which way to run, guaranteeing the defense is always wrong.  There are many variations on the zone read, but the basic play looks like this: 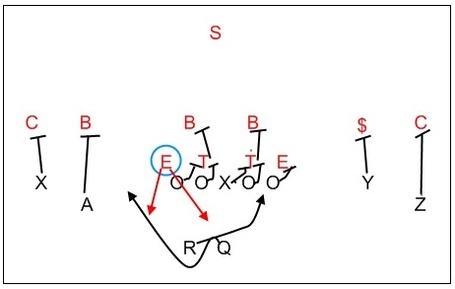 The zone read has been around for a long time and most teams know how to defend it, but offensive coordinators have been trying different things to mix it up and present the defense with different challenges.  Here's an interesting play Pitt ran against Iowa where they turned the zone read into a triple option play. 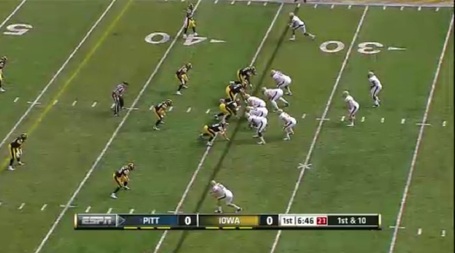 The Panthers line up with three wide receivers and an H-back to Sunseri's left. 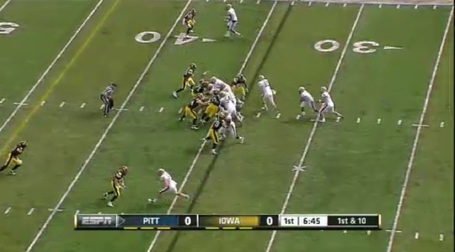 Pitt runs a basic zone read with Sunseri reading the end to his right.  The end doesn't crash hard but commits enough for Sunseri to keep the ball.  At the top the screen, you can see Devin Street getting in position to block the corner. 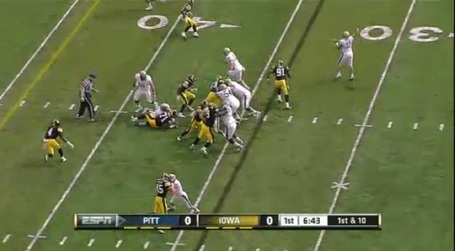 Sunseri gets out to the edge.  Here's where Pitt adds the triple option.  Street doesn't block the corner and releases downfield instead.  You can still see his feet at 41 yard line at the top of the picture.  The corner doesn't come down on Sunseri, but he doesn't cover Street either.  Sunseri flips the ball over his head and Street runs untouched 66 yards for the touchdown.

A play like that is good because it helps hide Sunseri's less than ideal athleticism.  If the corner stays back to cover the receiver, Sunseri can run for some easy yards.  If he comes down or lets the receiver by, Sunseri can throw an easy pass.

While Sunseri may not be the best fit for this offense, Pitt does have a sensational running back in Ray Graham.  Pitt tries to get the ball to him as many ways as possible.  I'll cover the two main running plays the Panthers used against Iowa: a type of misdirection power play and a counter. 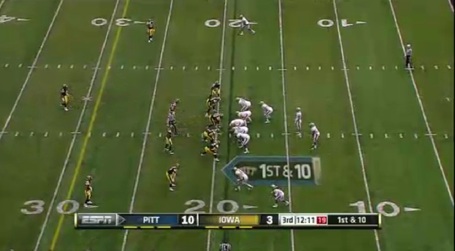 Pitt lines up just like they did when running the zone read. 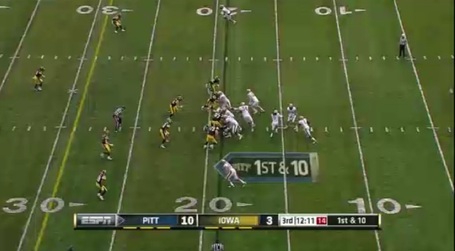 The receiver in the backfield comes over on a jet sweep.  At the same time, Graham comes up for the handoff.  This hides who is getting the ball and creates uncertainty for the defense.  You can also see the backside guard pulling. 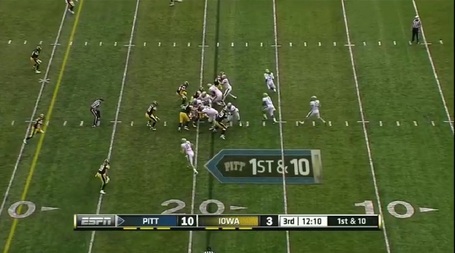 Pitt did hand the ball off on the sweep a few times, but Graham gets the ball here.  The reason I call this a type of power play is because it looks a little bit like our old friend, the Power O.  The H-back blocks the outside linebacker and the pulling guard runs through the hole.  It's not exactly a true Power O because there's no tight end and the defensive end was blocked, but it's about as close as you can get in a spread set. 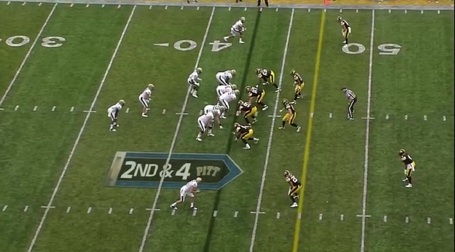 Pitt is still lined up in the same formation. 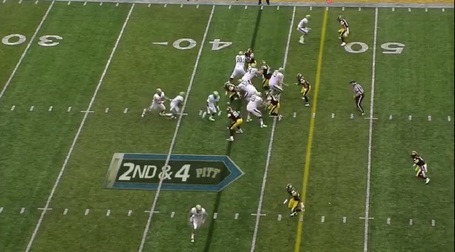 This play is actually a counter to the zone read.  There is no read though; it's a designed handoff.  The defensive end is unblocked again, but the H-back runs across the formation to block him.  Just like when triple option teams run the midline to get easy blocks on defensive ends, the purpose of this play is to make the end think he is being read, causing him to stand on the line and become an easy target for the H-back.  It's a good play on its own, so it's still effective even when the zone read isn't a big threat in the Pitt offense. 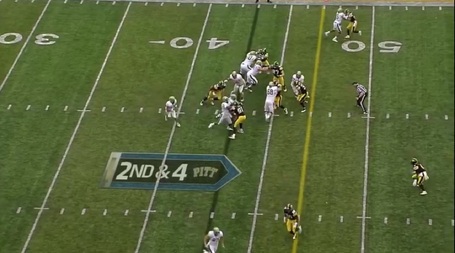 Instead of continuing across the quarterback like he normally would, Graham takes the handoff and cuts back to follow the block of the H-back.  This is similar to the counter Notre Dame likes to run.

So that's a rundown of the Pitt offense.  It's the first true spread offense Notre Dame will face and features a dangerous runner in Ray Graham.  The Notre Dame defense has done a great job of shutting down opposing running backs so far this season, so hopefully that trend can continue.  Sunseri is prone to mistakes, so if the Irish can force the game into his hands, Notre Dame should be able to win this game fairly easily.