MSU Review: Anatomy of a Touchdown

Share All sharing options for: MSU Review: Anatomy of a Touchdown

Back before the season started, I promised to highlight the Irish passing game more often.  If you've been reading my posts then you know I haven't done a very good job so far.  But today we're going to look at what happens when the ball is put into the air.

I'm just going to highlight one play, but I love everything about it: the call, the timing, the execution, everything.

Here's Notre Dame lined up against the Spartans in the third quarter: 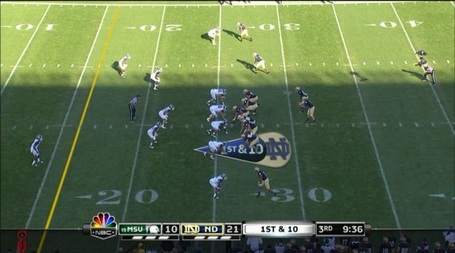 Notice the coverage on Theo Riddick and TJ Jones to the field side.  Jones's man is playing press coverage while the outside linebacker is lined up over Riddick with the safety creeping up right behind him.  Meanwhile, the other safety is shaded towards Floyd on the other side. 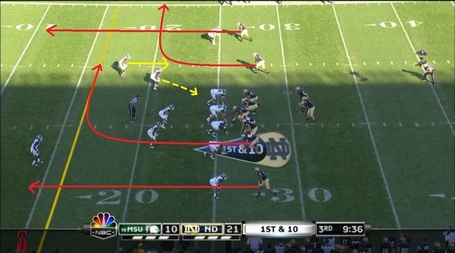 Here are the routes the Irish receivers run.  Jones will run a go route with Riddick filling behind him on a six yard out route.  Tyler Eifert will release from his tight end position and come across the field behind the linebackers.  It's hard to tell, but it looks like Floyd goes deep as well.

I could be mistaken, but it appears the Irish are setting up a triangle concept with these routes.  The triangle concept is a combination of routes designed to beat multiple coverages.  The placement of the three receivers creates a "triangle" that will create either a horizontal or vertical stretch of one defender.  Here's an example run out of a bunch formation: 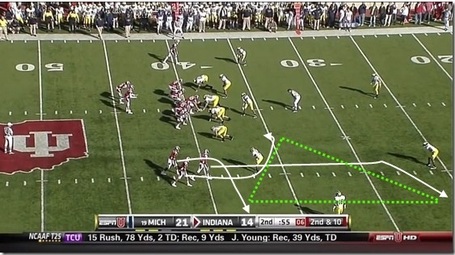 Against Cover 2, the corner back will be stretched vertically and forced to choose between covering the deep route (Jones's go route in this play) and covering the shallow route (Riddick's out route).  If the defense is in Cover 3, the deep route can be taken away, but the defense will typically be left with one flat defender to cover the two out routes, creating the horizontal stretch.

The triangle concept isn't perfect because it doesn't truly "beat" a certain coverage like some plays, but it is very versatile and can help guarantee completions against a variety of defenses.

Now back to the play.

Throughout the game, Michigan State was lining up their outside linebackers over the slot receivers, but they rarely played coverage.  In an effort the help slow down the Irish running game, they would watch the quarterback and attack if he handed the ball off or try and drop into some kind of coverage if he didn't.  The safety then came down to cover the slot receiver. 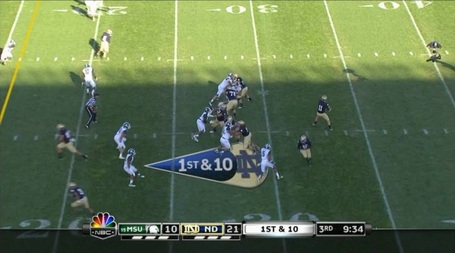 Rees fakes the handoff, freezing the linebackers.  Riddick is already breaking out on his route.  The outside linebacker, seeing pass, is scrambling to catch up and the safety is trying desperately to get down to cover him. 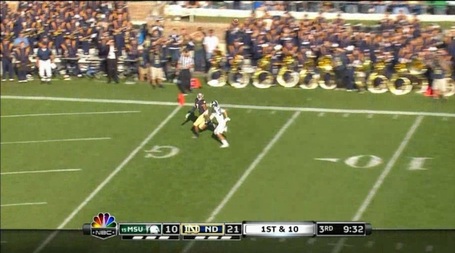 This is why the play call was so perfect.  The play action forced the outside linebacker to hesitate slightly.  Michigan State's scheme forced the safety to help on Riddick's route.  Jones takes off, the safety has to come down, and Jones is left one-on-one over the top.  He gets a step on his man and Rees throws a perfect ball for the touchdown.

Interestingly, MSU decided to blitz the corner covering Floyd.  Rees never looked his way and got the ball out before the defender got there, but it seems like a risky move with the Irish inside the 30 yard line.

So that's how the Irish scored their last touchdown.  The defense was playing well, but the Irish needed that last score to put the game away.  The Spartans (and John Goodman) made it interesting at the end, but that last score gave Notre Dame a rather comfortable three score lead.