The name Greg Mattison might be a familiar one for Irish fans.  He coached for the Irish from 1997-2004, serving as defensive coordinator under Bob Davie.  For the previous three years, he coordinated the defense for the Baltimore Ravens.  After GERG drove the defense into the ground at Michigan when RichRod decided to shoehorn in his 3-3-5 concept, Mattison came in with a new, more sophisticated defense.  So that means multiple fronts and exotic blitzes.

Those exotic blitzes typically come in the form of a zone blitz.  The zone blitz is almost exactly what it sounds like: the defense brings pressure from the linebackers or safeties while playing zone defense behind it.  That may sound like a simple concept, but it wasn't 40 years ago.  From the Smart Football article:

Before the 1980s, the general but imperfect rule was that a four man rush meant zone, while a blitz meant man-to-man. According to Tim Layden:

"The one thing you knew," says Steve Spurrier, who played quarterback in the NFL from 1967 through '76, "was that if you saw a blitz, you were getting man-to-man defense behind it. That didn't mean it was easy to deal with the blitz, but at least you knew what coverage you were going to get."

Then, one day, defensive coaches (specifically, Bill Arnsparger and Dick LeBeau) thought, "Hey, what if we just played zone behind our blitzes?" and thus the zone blitz was born.  The idea is to bring pressure without sacrificing defensive integrity.  Generally, this can mean bringing linebackers or safeties on the blitz and dropping linemen into zone coverage.  This allows the defense to load up on one side and bring pressure but still have six or seven defenders behind them.  Here's a very simple zone blitz where the Will linebacker shoots between the tackles while the defensive end drops into zone: 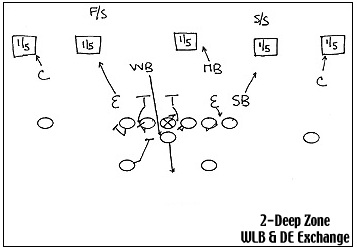 The zone blitz attempts to do two things.  First, it wants to confuse the quarterback and offensive line by bringing pressure from different angles and dropping different guys into coverage.  This messes with the line's protection calls and changes the read for the quarterback.  Suddenly, the defensive end is dropping into coverage and a linebacker is coming instead.  If the line isn't ready, the blitzer can come free towards the quarterback.  And if the quarterback doesn't recognize the defense, he might make a bad throw.  Second, it wants to minimize how much the defense is exposed on the blitz.  A zone blitz doesn't need to be "all-or-nothing."  Here's a rather basic zone blitz that brings five rushers and drops six into zone: 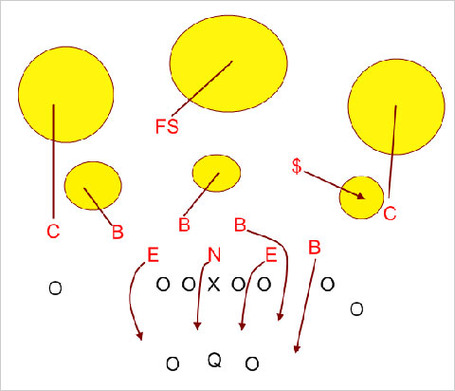 Notice how there are three rushers going against the guard and tackle on the right side of the line.

Of course, there are risks to zone blitzes.  It's not too hard for a receiver to find a hole in the zone if he's playing heads up.  If the blitz gets picked up, the quarterback might be able to find a big hole deep down the field.  Also, if there's a lineman dropping into coverage, the defense has a 280+ pound lineman trying to play pass coverage.  Beyond the initial surprise, the advantage is clearly to the offense there.

Michigan blitzed the Irish quite a bit on Saturday, so let's look at how the Irish countered.  As you'll see, it's quite easy to stop a blitz when you know it's coming... 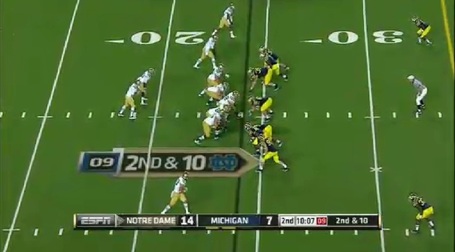 The Irish line up with four wide and Wood in the backfield.  Michigan is showing a 3-4 front and put two linebackers on each edge. 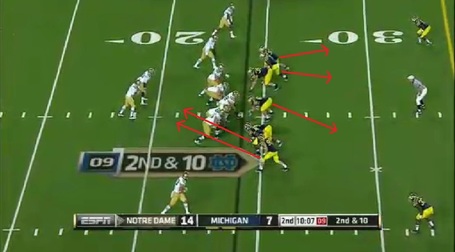 Michigan will blitz the two linebackers to Rees's right and drop the other linebackers and nose guard Mike Martin into coverage.

Notre Dame clearly saw this on film and created an audible for this look.  Someone in the comments earlier this week mentioned this, but you can see Rees check at the line and wipe his hands on the front of his uniform, signaling a run up the middle. 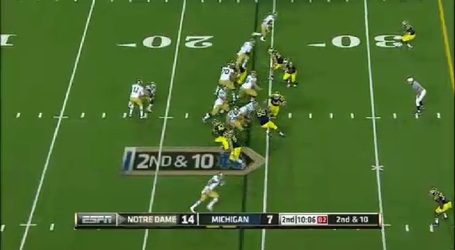 Rees hands the ball off and Wood runs right into the hole vacated by Martin.  Trevor Robinson and Zach Martin take care of the defensive ends.  Braxton Cave and Chris Watt move forward with no one to block. 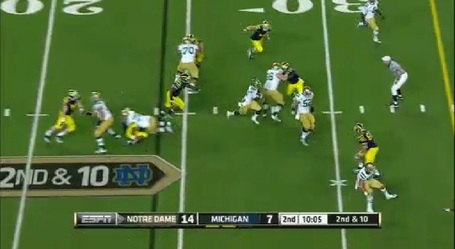 Watt takes care of one of the dropping linebackers and Cave gets in front of Martin, still backpedaling trying to get to his zone.  Wood has a giant hole and picks up 22 yards.

This exact same thing happened later in the game with basically the same result.

Mattison clearly isn't working with his full playbook.  He's working with kids learning a new scheme who learned under Greg Robinson for multiple years.  But give credit to the Irish coaching staff for catching this on film and making the proper adjustment.

Finally, what happens when you fake a blitz? 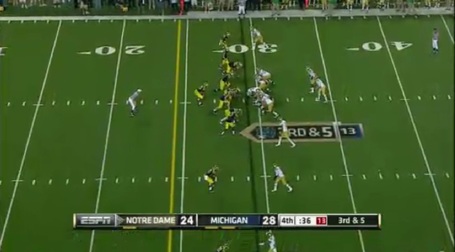 This is Notre Dame's final offensive play of the game.  Michigan lines up like they're bringing the house on 3rd down.  They have eight men in the box and the deepest man is three yards off the line of scrimmage. 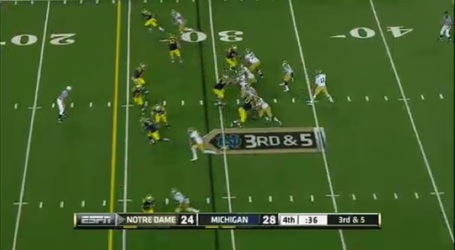 At the snap, everyone bails and the Wolverines only rush three.  Now, here's the problem with this call.  If a receiver is running a vertical route (which Theo Riddick is), it's basically a footrace down the field.  And look at the defenders - a number of them aren't even looking at the quarterback.

So you have a converted running back racing linebackers down the field?  Guess how this one ends. 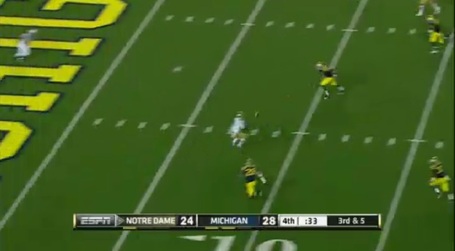 Riddick is wide open and walks in for the winning touchdown.  This type of play works when you have Ray Lewis and Ed Reed on your team, but not when you have MAC-level talent.

So I hope that served as a good primer on the zone blitz.  The offense was able to torch this defense for over 500 yards and the line did not allow a sack.  This Michigan defense can only get better (because it can't get worse) so it's progression throughout the season might be something to watch as the year goes on.  Greg Mattison is a very good coach and may have been the best coordinator hire this offseason.  It will be interesting to see if he stays in the college game long-term or if the NFL comes calling again.  Hopefully he won't be around for long because I have feeling this defense will be getting a lot better very quickly.