The Mouth of the South discusses the inner workings of the 2011 Irish Football Team's psyche and the importance of beating State.

1. Let's go ahead and talk about the big pink elephant in the room. After two absolutely horrid, heart-breaking, and downright mind-boggling performances, how do you feel about this team moving forward? Are we simply a bad team or a team that just hasn't put it together yet? This is your chance to talk Irish fans of the ledge...or push them over.

You got me.  It's not often that the Mouth of the South is at a loss for words, but I have no idea.  Turnovers, penalties, awful special teams, and complete and utter defensive breakdowns do not a good team make.  Nor are these problems the hallmarks of great coaching.  It's hard to deny how good the team looks 75% of the time.  The problem is that we are embarrassing ourselves in that pesky 25% remainder. 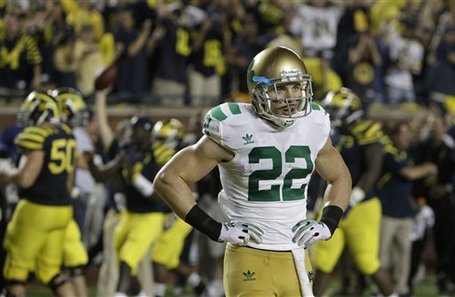 This is not what we want to see Saturday.

We thought that this team had arrived during our four-game win streak to end last season.  In hindsight, it looks like we beat an overrated Utah team that had been pantsed the week before; Army; a talented but Kiffin-ed USC team; and an athletic, but utterly uninterested Miami team.  Then GAVE--and I do mean GAVE--away two imminently winnable games to kick off what was supposed to be a BCS year.  The players probably also thought that they had arrived.  They clearly haven't.  They've done so much losing in their time at ND that it's become their default setting.  How else can we explain the last two weeks?  The coaching staff is trying to cultivate a winning attitude and a killer instinct in this team.  The players appear to have spit the bit.  They take their foot off the gas when they have a chance to put the game away.  They let the other guy off the hook.  Insert hackneyed cliche about choking.

There are definitely some positives.  We play excellent run defense.  We move the ball well between the 20's.  Our defense plays nearly dominant football in the first three quarters.  But that's all for naught when your offense doesn't put the ball in the endzone and can't get that one yard on 3rd down, and your defense cracks with the game on the line in the fourth quarter.  This team needs to execute in two senses: (a) they must bring a sense of urgency in doing their jobs to the best of their abilities, and better, on every play; and (2) they must cut off the enemy's head when it's on the chopping block.  We had several chances to execute both Michigan and South Florida, but we put down the ax and took a wine-spritzer break.    I believe that this coaching staff will get us there, but losing is a sickness that we clearly haven't yet kicked.

2. It's time to put on the headset and step into the shoes of Brian Kelly. In the first quarter, it seemed like your message and plan to recover from the USF disaster worked, and then the rest of the game happened. How do approach this week? What message do you give your players?

I think Coach Kelly has the right attitude.  He's done this before.  He's won championships.  The problem is not with his approach.  He smartly realizes that if he wants this team to get there mentally, if he wants them to be consistent, he needs to be consistent.  If he starts changing or questioning his approach, the players are going to start changing and questioning whether Kelly knows what he's doing.  We've seen some pretty fluky things happen the past two weeks.  I've heard people say that we're cursed.  This is of course complete nonsense, but there's no quicker way to put this kind of silly nonsense into your players' heads than to start switching up your approach.

This team's problems aren't physical, so they're either mental or schematic.  Or Kelly doesn't know how to win.  Kelly's won everywhere he's coached, and his schemes haven't failed him yet.  He beat better teams with less talent at Cincinatti.  So I deduce that this team's problems are mental.  Just like he didn't panic after Tulsa, Kelly can't panic now.  Stay the course.  Do what you've been doing.  With just a little more time spent on ball security. 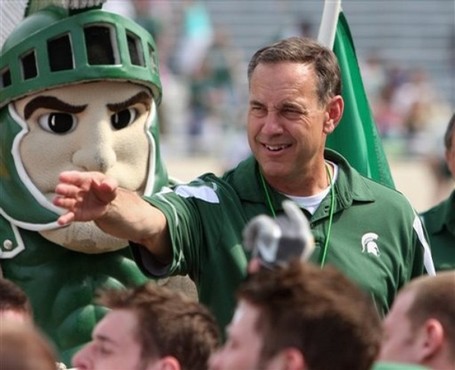 3. Keep that headset on, you are still playing Kelly. Based upon what you've seen these last two games, do you see players that need to start riding the pine or are you still confident in your depth chart

Who do you bench?  We could use more production from receivers not named Michael Floyd, but that's only the case if Floyd stops producing or gets shut down, which we haven't seen yet.  You can't bench Riddick or Jones because both guys looked a lot better against Michigan.  The O-line is playing well, though they don't seem to get much of a push on the most important plays of the game.  Kelly didn't fault them, though, and they've been playing at so high a level most of the time that you can't justify benching any of them.

It's too facile to blame any player or players for our losses.  We've seen wind-sucking, bed-crapping, and pooch-screwing aplenty from pretty much all of our starters not named Michael Floyd over the past two weeks.  No one has executed at a consistently high level, so if you start benching starters, where do you stop?  I think Kelly is smartly walking a fine line between supporting and encouraging the players and telling them to un[expletive deleted] themselves.

4. Overall, how do you feel about Rees' performance against Michigan?

Rees's performance was just like everyone else's:  he did enough to win us the game, but he didn't do enough to win us the game handily.  Like Holtz said, "it doesn't have to be close."  This  group of players doesn't realize how talented they are or how good they can be.  They've subconsciously put middling Michigan, South Florida, and Michigan State teams on a pedestal.  They think that because they've lost to or played these teams closely for so many years, they must continue to do so.  They just need to realize how high they can fly.  Then they'll be no stopping them.  Where were we?  Right, Rees.  I like everything he did against Michigan, except for the turnovers.  So if he could just go ahead and do that again, just minus the turnovers, that would be good.

5. Let's talk about something happy: the Irish running game.  After a 198 yard performance by the Irish do you feel that this rushing attack led by Cierre Wood (134 yards) is for real or have we not run into a tough enough defensive test yet?

Our running game is definitely on an upward trend.  I'm just not sure how I feel about a ball control offense that turns the ball over as soon as it gets to the twenty.  We pick up yardage in 10- and 20-yard chunks but then abandon the run game or just can't run in the fourth quarter.  So we're shortening the game--which favors the less-talented team--but not putting points on the board.  If the games are going to keep going like this, we may as well forget the run game and just air it out.

6. Looking ahead to Michigan State, how do you gauge them?  Is this the best team that we've faced off against yet or is this just an untested team that beat up on two cupcakes in Youngstown State and Florida Atlantic?

We won't see this week, because Michigan State always waits until after they play us to implode.  They're definitely in good shape with skill position talent on offense, defensive line, and an overall program continuity standpoint.  They don't have any one player that really scares you, though.  Are they the best team we've focused?  After the last two weeks, I don't fear any team with a non-dual-threat quarterback.

7. Is the key to winning simply not turning the ball over or do you see other crucial keys to beating Sparty?

If I knew "the key to winning," I'd be making the big bucks.  Still-not turning the ball over would seem to me to be a damn good candidate for our "key to winning" this week.  If we did everything the same the past two weeks, but just without the turnovers-the same, just different-I have suspicion that the outcomes may have been different.  Call me crazy.

8. Obviously every week should be a must win, but I think there is definitely more of an urgency this week. How crucial is this game for the rest of our season?

The importance of beating State cannot be overstated.  This team and fanbase need it as badly as any win in the past 10 years.  GO IRISH.  BEAT STATE.