Misdirection and the South Florida Bulls

Share All sharing options for: Misdirection and the South Florida Bulls

I'm taking a break from writing for Voodoo Five to bring you an actual Notre Dame football post.  This is the first in a (hopefully) thirteen part series wherein I preview our upcoming opponent.  I plan on looking at their most recent game (when available) and give you, the reader, a rundown on their offense and what to expect when the Irish take the field.  This being the first game of the season, I had to go back to the Meineke Car Care Bowl, the most prestigious of all the car repair bowls, where USF beat Clemson by a score of 31-26.

USF’s offense isn’t really much to look at: they ranked 105th in the nation in YPG, 103rd in passing, and 71st in rushing in 2010.  However, one thing they do have going for them is their quarterback, B.J. Daniels.  He’s not the most polished of passers (58% comp %, 11/13 TD/INT) but can make plays with his feet.  The Bulls’ offense incorporates a fair bit of misdirection and a smattering of zone read and option plays in order to take advantage of Daniel’s athleticism.  When that’s working, the pass plays open up.

A word of warning: if you’re the type of fan that watches the QB the entire play, you may find yourself lost fairly often when South Florida has the ball. (Side note: I always find it best to watch the offensive linemen.  You’ll know by the way they get out of their stance if it’s a run or pass.)  Daniels does basically the same thing whether he’s handing off, keeping it on a designed run, or executing a play-action fake.  Let’s look, shall we? 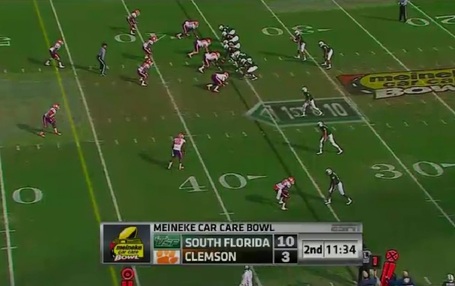 The Bulls line up in a fairly basic 3 wide shotgun formation. 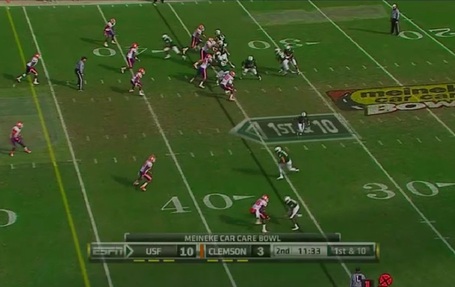 Daniels looks like he’s handing the ball off.  The DE on the right side of the line isn’t blocked but doesn’t attack, respecting the zone read.  However, this play is actually a play-action bootleg.  You can see the pulling center coming out to block the DE as Daniels rolls out. 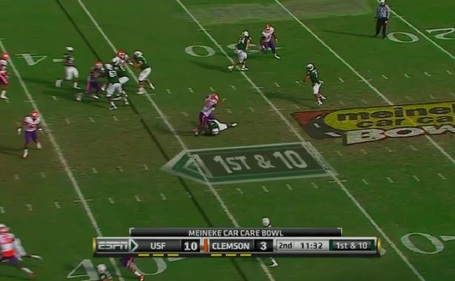 Daniels has no pressure on him… 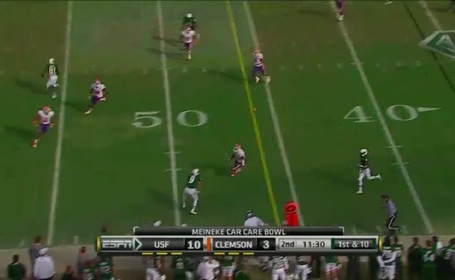 …and finds an open receiver downfield. 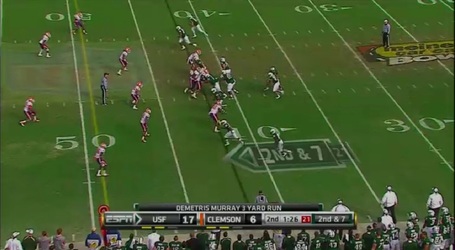 Alright, that was a little unfair since it’s kind of hard to tell what’s going on from a still picture.  Those two offensive lineman straddling the 40 yard line are the two offensive guards pulling as lead blockers for the running back. 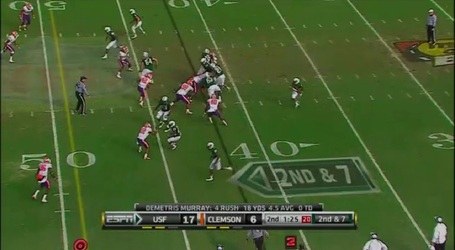 The next play I want to highlight is a nifty little triple option play (no, thankfully not the Veer) USF ran a few times against Clemson.  It’s a type of speed option that incorporates an inside shovel pitch option (Similar to one Notre Dame ran against Stanford). 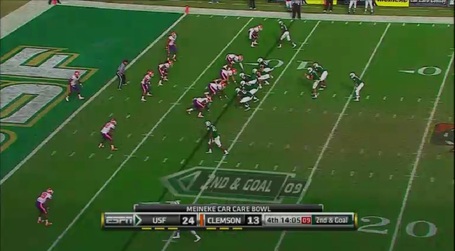 Daniels is lined up in the pistol with two running backs in a kind of off-set I-formation. 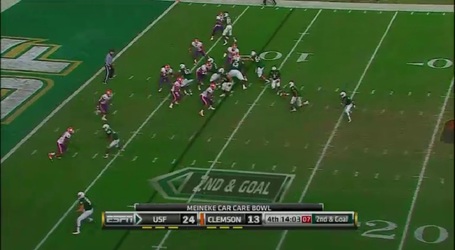 Daniels first options the play-side DE.  If he attacks the QB, he’ll pitch it to the "fullback" (not really a FB but we’ll pretend for now) to his right.  Notice that the guard is there to block the OLB if Daniels makes the pitch.  Here, Daniels keeps it. 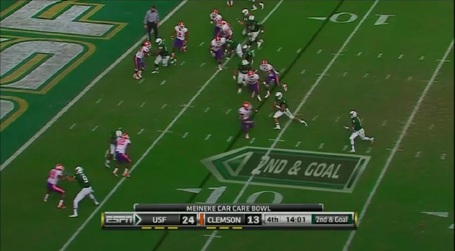 The next option is the OLB.  If he attacks the QB, he’ll pitch it to the RB to his left.  The OLB follows the RB and Daniels walks in for a TD.

Overall, this is not a high-powered offense.  If Notre Dame can play disciplined defense and shut down the running game, this could actually be an easy game.  As long as Meineke Car Care Bowl B.J. Daniels doesn’t show up (20/27 for 189 yards, 2 TD 1 INT) I think Notre Dame can jump out to an early lead and control the game.  In their bowl game, USF put up 31 points but did it with only 279 yards of offense.  If the Irish go over 30 points, I don’t see the Bulls being able to score enough to win.

Now for a little housekeeping.