The Utah game.  Finally, a game that doesn't make me want to kick puppies as I write about it.  This was Tommy Rees's first start at quarterback for the Irish and marked a shift in the team's offensive philosophy.  Rees threw the ball 54 times against Tulsa, probably because that was the game plan going in and Kelly wasn't going to go away from what the team practiced in the week leading up, freshman quarterback be damned.  But in order to protect the freshman, Kelly made the running game the focus and installed a more power-oriented offense for the game against the Utes.

I know I’ve said plenty about this subject already, but I feel like this is a good time to write about the basic "power running" plays that you'll see most team run on Saturdays (and Sundays!).  So in this post, I'll be featuring three staples of the traditional power running concept: the Power O, the Outside Zone, and the Trap.

First up, the Power O.  This might be the most popular running play in both college and professional football.  Here’s what it looks like: 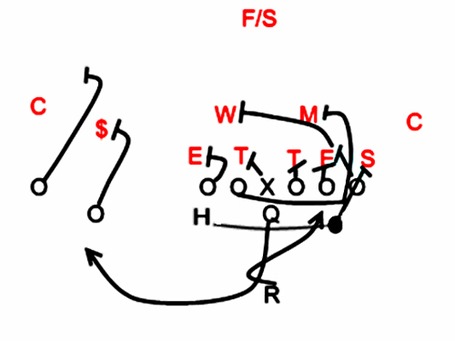 The goal of the play is to seal off the defenders on one side with the offensive linemen and then use the fullback to kick out any outside defenders, creating a lane for the running back.  The reason the play is so prevalent is because it’s so effective: it creates double teams at the point of attack and forces the defense to commit more defenders to the running game, opening up the passing game off of play-action.

Notre Dame came out with two tight ends, something they didn’t show a lot of before this game.  Even more unusual, they motioned Eifert and used him as an H-back. 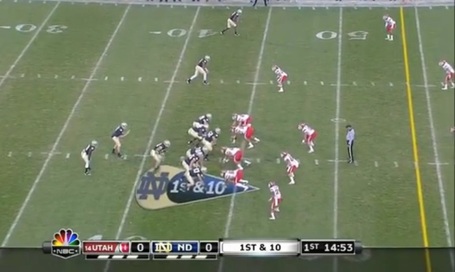 At the snap, Chris Stewart pulls from his guard spot and the rest of the lineman block down, meaning they block the man to their inside. 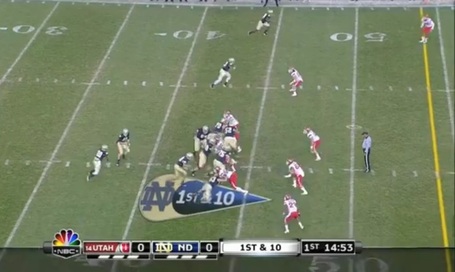 Now, there are problems with this play from the beginning.  First, Taylor Dever doesn’t help Trevor Robinson double the defensive tackle.  Instead, he immediately releases to the second level to block the outside linebacker.  Robinson still gets a decent block, but is driven about a step backwards, right into Stewart’s path. 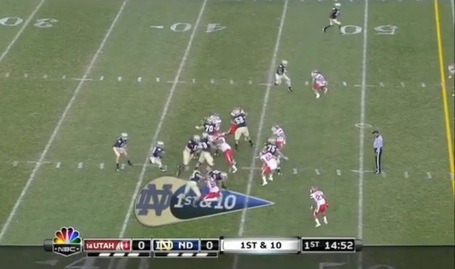 Stewart has to side-step Robinson, which slows him down and allows the middle linebacker to step into the hole.  Mike Raggone also doesn’t get a very good block on the defensive end.  Eifert decides to help him instead of moving up to block the other outside linebacker. 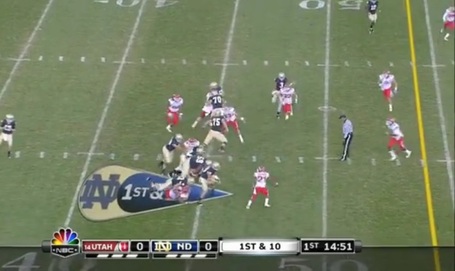 Eifert still manages to get up and is in decent position to block the OLB when Wood gets tackled.  Stewart still blocks the MLB, but right in the middle of the running lane.  In the end, it’s the tackle Robinson tried to block by himself that got off his block and tackled Wood.  If Robinson had gotten a better block or if Stewart had been able to reach his man sooner, the play could have picked pretty good yardage.  As it was, Wood only gained 2 yards.

The next play is the Outside Zone.  If any play can challenge the Power O for popularity among college and pro team, it’s this one.  Note that I’m not referring to the Zone Read, which is pretty much the same play but with the threat of a QB run attached.

In this play, as the name implies, the lineman block a "zone" as opposed to a particular defender.  The "Outside" in the name refers (mostly) to where the running back goes.  In the Outside Zone, the back aims outside the tackle and just looks for a seam to cut through.

Once teams start to adjust to the Outside Zone, the offense will call the Inside Zone, where the running back instead aims outside the guard.

If the defense expects the Outside Zone and flows too hard to the outside, then a seam will appear with a lot of room to run.  To understand the difference, check out the clips in this video and pay attention to the holes Walker runs through:

Inside vs. Outside Zone blocking (via bluegraysky)

This play forces the defense to play disciplined.  If a defender gives up his gap, a lane will open for the running back.  Of course, the same applies the other way.  The offensive linemen need to understand their assignment and play it correctly.  An unblocked defender will blow the play up.  The technical nature of the play makes it very popular in the NFL, where teams can have endless time to rep it and refine every aspect of the linemen’s technique.

So how did the Irish do it? 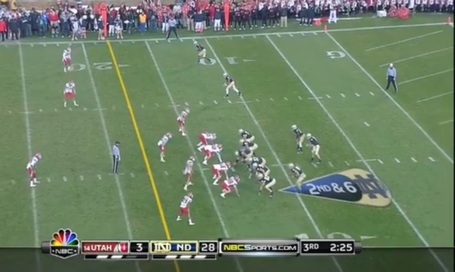 Again, the Irish came out with two tight ends, with Eifert as the H-back. 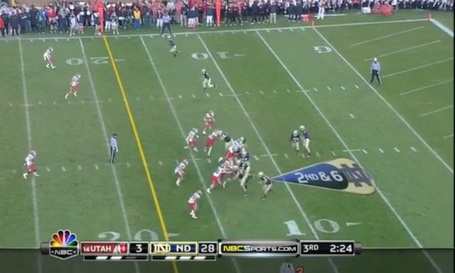 Look at Wood’s aiming point.  He’s heading outside in the direction of the outside tackle.  This is a dead giveaway it’s an Outside Zone. 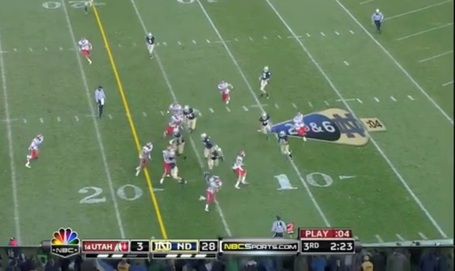 The offensive line does a good job picking up blocks and opening a crease for Wood to run through.  Zach Martin is in position to block the defender Wood is running towards.  The only problem I see is Trevor Robinson letting the lineman between him and Taylor Dever free to block the man Chris Stewart is already heading towards.  Dever isn’t able to get a good block on him. 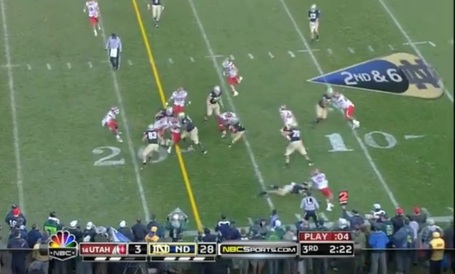 That lineman gets to Wood and shoves him down after a gain of four yards.

Finally, the Trap play.  This is a constraint play that punishes the defensive linemen (in this case, the defensive tackle) for crashing on the line too hard.

Notre Dame lined up with four wide receivers and no tight ends on this play. 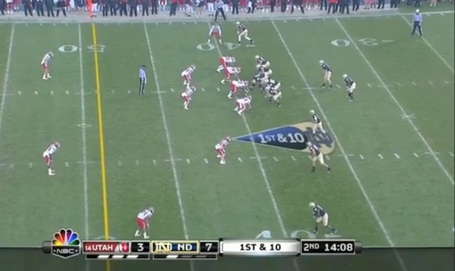 At the snap, both tackles release to block linebackers.  Braxton Cave down blocks on the defensive tackle, and Chris Watt pulls from his backside guard position.  Trevor Robinson shifts laterally to occupy Dever’s empty space, leaving the other defensive tackle unblocked. 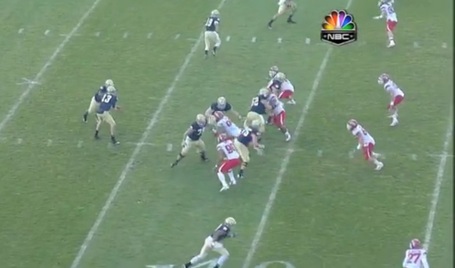 You can already see that the play is working to perfection.  Cave has a good block on the tackle, Robinson is fronting the end, and the tackle bit on the trap with Watt bearing down on him.  As Mike Mayock would say, BAM! 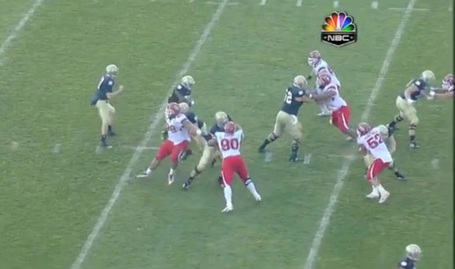 Cave, Watt, and Robinson all seal off their men and Dever and Martin block the linebackers up ahead.  Jonas Gray has a crease to run through and picks up seven yards.

I give Brian Kelly a lot of credit for the game plan he came up with for the true freshman.  Rees threw the ball pretty well against Tulsa (when he wasn’t throwing it to Tulsa’s players) but Kelly made the right choice to put the offense on the back of the running game.  To do that, he ditched the read-option and replaced it with tried-and-true power running concepts.  This wasn’t the first time the Irish ran these plays, but it was the first time these plays were used as the core of the running game.  Even though run blocking was a struggle at times throughout the season, the offensive line is packed with talent that can overpower a team.

I’ve said it a couple times in my breakdowns, but Kelly has said he isn’t as concerned with putting up big numbers and lots of points to drum up interest in his team now that he’s at Notre Dame.  He can focus on just running an offense that works.  And maybe running power or trap plays aren’t as exciting as high-flying passing attacks (well, maybe not for some people), but if it works, fans will be happy.

All that said, it’s not like the Irish were great at this new power offense.  The Trap worked fairly well, but the Irish didn’t gain a whole lot running the Power O or Zone.  Overall, the Irish only gained 127 yards rushing (on a somewhat decent 4.4ypc, though).  But I think the ball control offense (the Irish didn’t even sniff anything resembling a hurry-up no huddle offense) took a lot of pressure off Rees, who only had to put the ball in the air 20 times.  It’s adjustments like this that give me a lot of confidence in Kelly and his offensive staff to take whatever they’re given and put a decent product on the field.