My Favorite Play of the Charlie Weis Era

Share All sharing options for: My Favorite Play of the Charlie Weis Era

So I know the 2011 season opener is rapidly approaching and most people would like to just forget the Charlie Weis era and move on to Season 2.0 of the Brian Kelly era, but I've had the idea for this post for a while and with Weis back in the college game, I thought I'd break it out.

The play I'll be highlighting is a red zone play Weis used to great effect with Samardzija in 2005, less so in 2006, and then almost not at all after that.  Luckily, I found some examples of the play from the 2008 and 2009 season, so pop some Prozac and let's jump in the Way Back Machine and relive the days of decided schematic advantages** and tough, nasty football teams***.

This first play is from the 2008 game against Purdue. 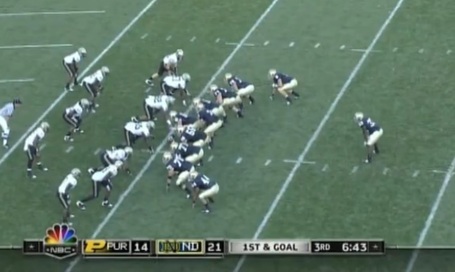 The Irish are on the five yard line and are lined up in a jumbo set with seven offensive linemen with Kyle Rudolph and Asaph Schwapp (remember him?) flanking the line.  Robert Hughes is in the backfield behind Jimmy Clausen.  Naturally, the Boilermakers are stacking the box. 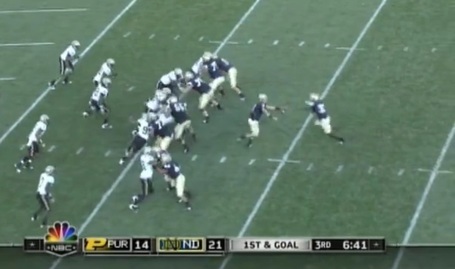 The line blocks straight ahead, with Schwapp and Rudolph helping to double team the rushers at the ends of the line. 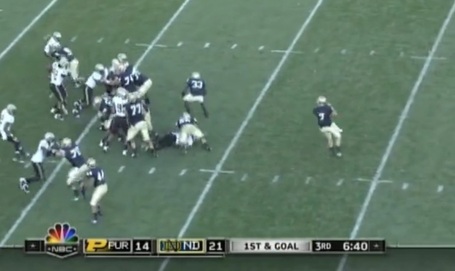 Obviously this isn't a straight ahead run; where's the fun in that?  Clausen and Hughes fake the handoff and Hughes runs to Rudolph's end to help in pass protection.  Rudolph, still selling run, moves up to block a linebacker.  Or does he? 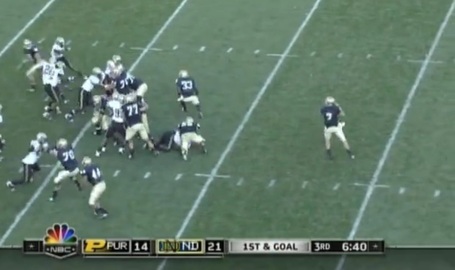 Rudolph fakes the block and slips behind the defense.  Everyone on the Purdue defense came up to help on the run, so no one is back to protect against a pass. 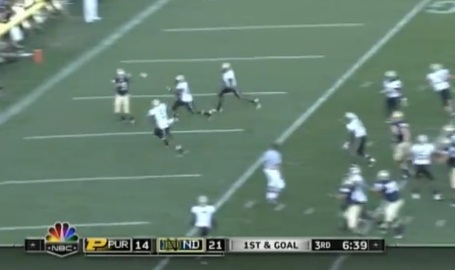 A few Purdue defenders realize what's going on too late.  They try to catch up to Rudolph, but by then Clausen has already thrown the ball.  Touchdown, Irish.

Here's the same play from 2009 against Michigan State. 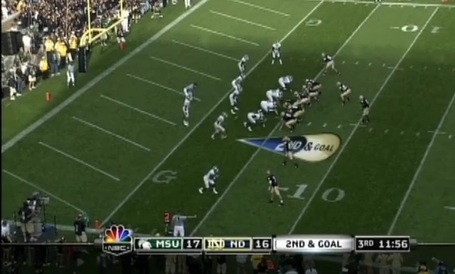 The Irish are lined up in the Wildcat this time.  In true Wildcat fashion, Notre Dame is lined up with an unbalanced line to the right.  Robby Parris is out wide to the right.  Clausen is out to the left with Golden Tate in the slot.  Armando Allen is the Wildcat back taking the snap. 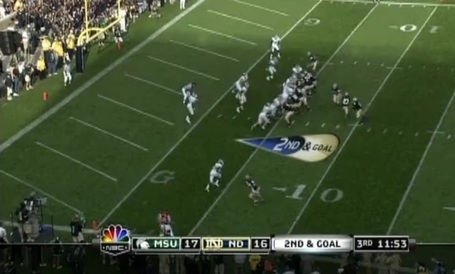 Tate comes over on the jet sweep.  The line blocks straight ahead and Allen fakes the handoff.  Parris, selling run, moves up to block a linebacker. 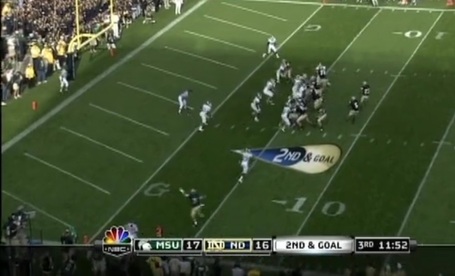 Allen takes a step forward to fake the run and then pulls back.  Parris briefly engages with the linebacker before slipping by him. 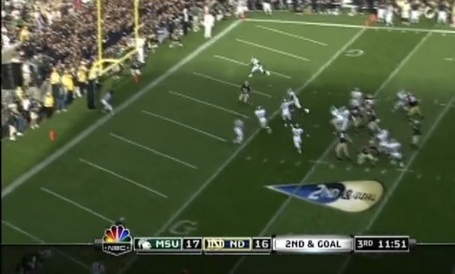 No one follows Parris until it's too late and Allen makes a perfect throw to him for the touchdown.

As a side note, look at Clausen at the bottom by the NBC logo.  His man immediately took off towards the line at the snap, leaving no one even close to him.  I'm a little disappointed Allen didn't just loft the ball to him so Clausen could have had a touchdown reception.

So that's my favorite play from Charlie Weis's playbook.  It's pretty easy to see why this worked so well in Weis's first year and then slowly went away.  It can surprise unsuspecting teams, but if the defense knows it's coming then it's pretty easy to stop.  In a way, it epitomizes the Weis years.  If the play works, it makes the defense look foolish as someone runs right by them and catches a wide open pass in the end zone.  When it doesn't work, all you can do is hope the quarterback has enough sense to throw the ball out the back of the end zone and not try to force it or run it in himself.  High risk, high reward.  That pretty much sums up Weis's offense.

*Assuming that offense is run by a veteran quarterback with tall, rangy receivers and an offensive line at least adequate at pass protection.  Otherwise, you get this.  Good luck, Florida.