Well, the season is (finally) fast approaching and it's time to get back into the swing of football season.  In my breakdowns of the games from the 2010 season, I've talked in great detail about the Irish offense and how it changed over the course of the season.  If you compare the offense the Irish ran against Purdue to what they did in the Sun Bowl, it's like looking at two different teams.  We already know Dayne Crist will start against South Florida, but we don't really know the style of offense the Irish will run.

So when we start looking towards the upcoming season, how do we know what to expect when the Irish take their first snap on Sept. 3?  Well, Brian Kelly will be calling the plays, and no matter who is behind center there are plays Kelly likes to run.  I've already written about the two plays I'm featuring here, but it was quite a while ago and back at Rakes, so some of our loyal readers may not have caught those posts, so I decided to write about them again.

The first play we’ll look at is a fairly common pass play. 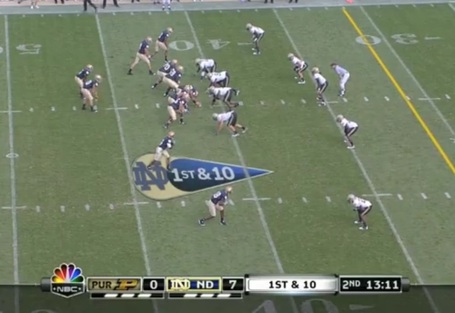 The Irish line up in a tight formation.  Because this particular play is on the hash marks, the field side receivers are spread out a bit. 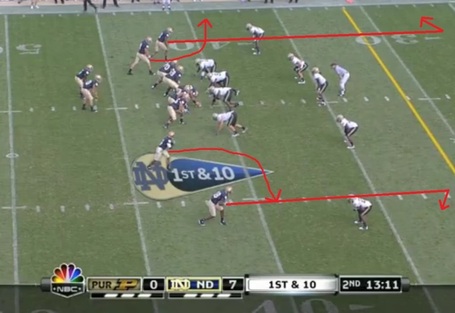 The play is rather simple.  Both inside receivers run out routes towards the sidelines at a depth of only 2 or 3 yards.  The two outside receivers will both run vertical routes.  Their goal is to get open.  Against zone, they’ll try and settle in the spot between then corners and safeties.  Against man, they’ll run either a go route or a post, depending on how the corners and safeties play them.

The purpose of this play is to attack the defense vertically.  If the defense comes down on the out routes, the quarterback can hit the outside receivers over the top.  If they follow the vertical routes down the field, the out routes will be open with the possibility for yards after the catch. 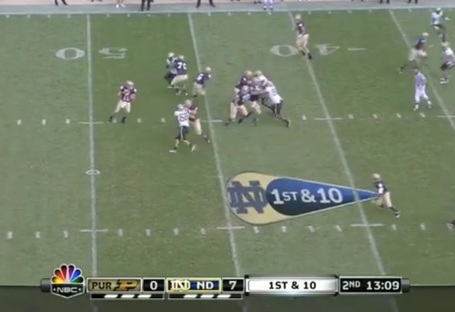 Dayne Crist takes the snap and drops back.  Kyle Rudolph and Theo Riddick cut to the sidelines on their out routes.  Michael Floyd and Duval Kamara head downfield.  With Purdue only rushing four men, Armando Allen releases to the middle of the field as the outlet receiver. 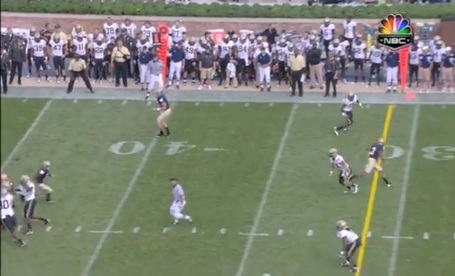 Purdue appears to be in Cover 2.  The linebackers and corners all seem to cover an area right around the first down line.  The two safeties stay back behind them.  Rudolph is open on the out, but look at Floyd.  He slips right behind the zone... 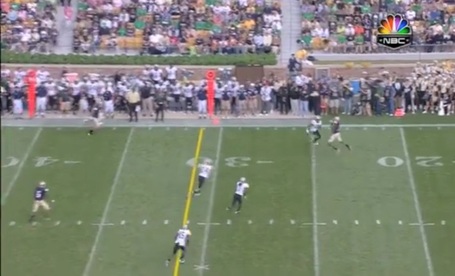 ...and settles into a spot and catches the pass for a gain of 19 yards.

This tight formation is not something the Irish used a whole lot except to run this play.  Kelly did change it up sometimes by having the inside receivers run the vertical routes and the outside receivers run the out.  Or he would invert the alignment of the receivers on one side and run a bootleg with all four routes going in the same direction.  But if you see the Irish line up like this, expect a play a lot like this one.

Next we'll look at what was probably by far the most common running play for Notre Dame last season. 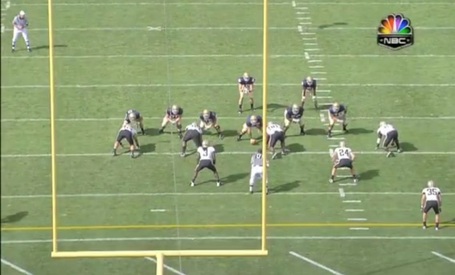 The Irish line up with Rudolph on the line.  The Boilermakers only have six men in the box, giving Notre Dame favorable numbers for running the ball. 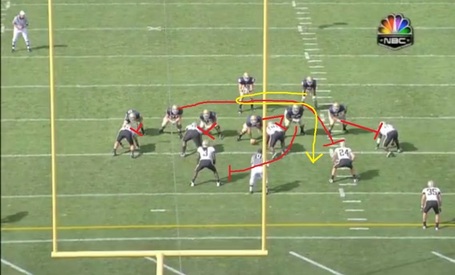 The play is a counter; after receiving the handoff, Allen takes a step to his right before changing direction and running to his left.  Meanwhile, Taylor Dever pulls from his right tackle spot to act as a lead blocker and kick out a linebacker.  Chris Stewart's responsibility is to double the play side defensive tackle with Braxton Cave before moving up to the linebackers.  Cave's block is a bit of a reach; the tackle is lined up over his left shoulder and Cave needs to push him to his right. 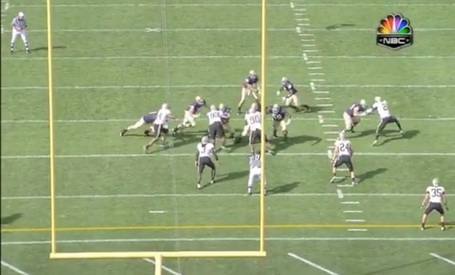 Instead, the tackle, seeing the handoff, starts to slant to Cave's right, making his block much easier.  Stewart no longer needs to double team him and immediately moves up to the second level.  Trevor Robinson gets a good block on the other defensive tackle.  Rudolph can't do much on Ryan Kerrigan and whiffs on his cut block (not that I blame him).  Zach Martin pushes the other defensive end outside. 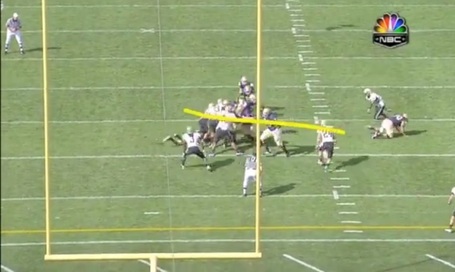 Allen changes direction and follows Dever through the hole.  Kerrigan gets caught up in Robinson and Cave's blocks and can't do anything.  Martin ends up letting his man through, but he's too far back to affect the play.

Look at Purdue's outside linebacker.  He bites hard on the counter and follows the play outside.  Stewart has no one to block. 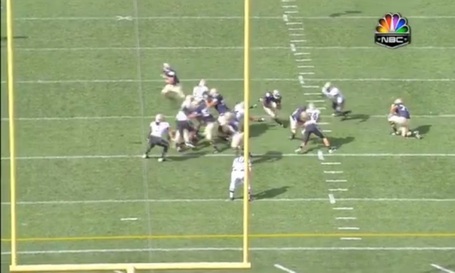 Dever leads the way through the hole and gets a nice block on the middle linebacker, opening up a big hole for Allen.  The safety has to come up and make the tackle after a seven yard gain.

You can expect to see this play several times a game.  Generally this play is run to the running back's right with Zach Martin pulling as the lead blocker - usually to good effect.  This was actually one of the few times all season the play was run with Dever pulling.

It's safe to say the offense changed rather significantly when Tommy Rees took over for Dayne Crist after the Tulsa game.  But these two plays were still run no matter who was behind center.  I took these plays from the Purdue game but could have easily used the Sun Bowl against Miami.  So watch out for these plays this season and impress your friends when you drop knowledge bombs on them.