Share All sharing options for: Notre Dame/USC: The Unbalanced Line

Even though I already (sort of) did a breakdown of the USC game, this post is a little advantageous for me.  I only have one play to cover, but it combines one of Brian Kelly’s core run plays that I haven’t had a chance to write about, along with a nice little wrinkle.

In keeping with the theme of Tommy Rees’s previous starts, the Irish ran a rather conservative, ball-control offense against USC.  The Irish threw more often than they ran (34 to 32) but only gained 149 yards in the air on 20 completions.  That’s a paltry 4.4 yards per attempt and only 7.4 yards per completion.  So a lot of those were short, safe throws to keep Rees out of trouble.  I guess that didn’t really work since Rees committed four turnovers, but we won the game so let’s not dwell on that.  Let’s talk about running the ball.

Here’s the Irish lined up in the first quarter against the Trogans. 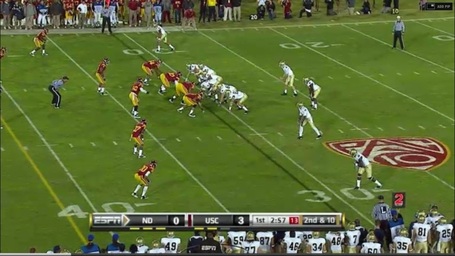 Well, if you read the title of this post, you probably already know.  The Irish are lined up with an unbalanced line.  From Rees’s left to right, the offensive line consists of Tyler Eifert, Chris Watt, Braxton Cave, Trevor Robinson, Taylor Dever, and Zack Martin.  Essentially, Zack Martin moved over from his left tackle position and placed himself next to Taylor Dever, giving the line this kind of look:

This is a pretty basic power running (There’s that term again!  You knew it was coming!) concept.  Footbaw Bob has a nice summary on the advantages of the unbalanced line here.  This is the important clip:

There are several reasons why an offense utilizes unbalanced formations.  First, the unbalanced line can cause confusion for the defense. Many defenses align their personnel based on where the tight end is aligned in the set. Putting a tackle over creates confusion for defenses on initial alignment. Secondly, it can cause personnel mismatches. By putting a tackle at tight end or creating a four-man surface, the offense causes mismatches with big offensive tackles aligned on smaller linebackers. This can be a big advantage in the running game.

Basically, going unbalanced is the offense’s way of saying, "We’re running this way and we’re going to smash into you and you can’t stop it."

Well, except for when they don’t do that. 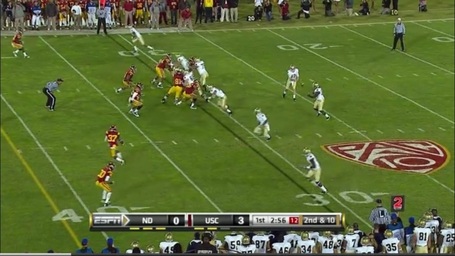 Rees takes the snap and flips to ball out to Hughes.  This was a fairly common play last season, usually coming up once or twice a game.

The purpose of the play is to punish the play side defensive end for crashing too hard on the line.  He is left unblocked but the running back should be able to get outside before he can do anything.

The unbalanced line is just a red herring to confuse the defense.  The defensive linemen seem to be trying to get to their left (away from where the play is actually going) and the linebackers hesitate ever so slightly.

At the snap, Eifert ignores the DE and moves up to block the middle linebacker.  Watt and Robinson block down on the defensive tackles.  Dever and Martin double the back side end, probably to further sell the defense on a run the other way.  Cave moves up to try and block the outside linebacker. 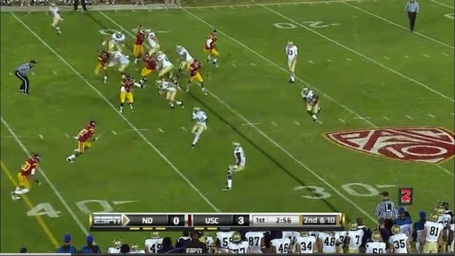 Eifert is teeing up the middle linebacker, leaving two defenders with two blockers ahead of Hughes. 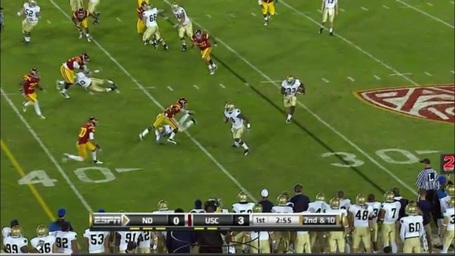 Riddick and Eifert cut their men, leaving Kamara one-on-one with the DB in front of him.  The safety has finally entered the picture to help. 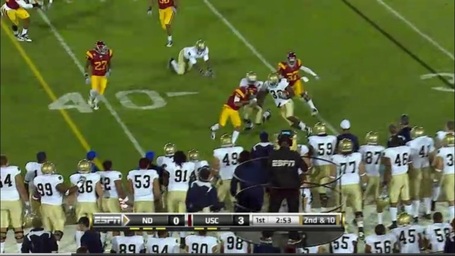 Kamara doesn’t get a great block, but Hughes stays in bounds and powers ahead for eight yards.

There’s not a whole lot else to say about this.  This was the only time I remember seeing the Irish go unbalanced, but it’s something that’s hard to pick up on TV.  The unbalanced line wasn’t anything more than a nice little wrinkle to build some misdirection into a play already built on misdirection (you don’t often see a running play out of the shotgun where the back runs away from the QB and not across him).  But then again, it’s always fun to find those little tweaks coaches make in games.

Oh, also, I would be remiss if I wrote a USC article without posting this pic: 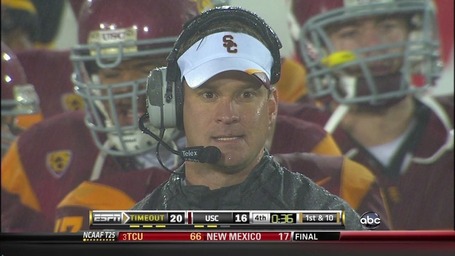