Let me begin by saying it’s awesome that Notre Dame was able to hold an Army team that finished the season tenth in the NCAA with 256 yards rushing per game to only 174 total yards of offense and only 135 yards rushing.  I’ve been accused of being a pessimist at times, but there are a few things Irish fans need to keep in mind before anointing Bob Diaco "Slayer of the Triple Option" and declaring next season’s games against the service academies as automatic wins.

First, Army and Navy do not run the same offense.  Yes, they are both option-oriented, but Army does not run the flexbone, which leads to different challenges for the defense (more on that in a bit).  Second, Navy has been running their offense since Paul Johnson took over as head coach in 2002.  When he left for Georgia Tech, his offense coordinator, Ken Niumatalolo, took over to provide continuity for the program.  Meanwhile, at Army, 2010 was only the second season the team had been running Rich Ellerson’s option scheme.  The option isn’t as ingrained in the program at Army as it is at Navy.  Finally, Army straight up isn’t as good as Navy.  They’re definitely better than they were two years ago before Ellerson was hired, but they aren’t on the same level as Navy yet.

All that being said, there are definitely some positives to take away from this game.  Some critical defensive adjustments were made that give me hope for the Navy game next season.  But let’s start by talking about the Army offense and how it differs from Navy’s.

The Army offense is probably best described as the Wing-T. 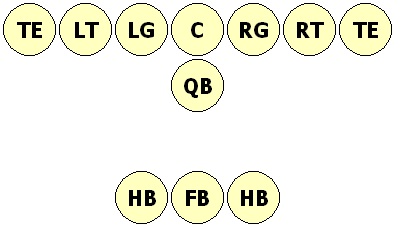 This is the T-formation, one of the oldest formations in football that first gave rise to option football.  In their version, Army flexes one of the halfbacks out and sometimes (but not all the time) motions him into the backfield, creating a T-like formation.

Like Navy, Army’s offense heavily features the Veer, and the mechanics of the play are exactly the same.  Army, however, can only show three receivers at a time, while Navy can show four, which puts more stress on the other teams’ pass defense.  However, Army can incorporate more misdirection and more traditional straight-ahead running , which Navy can’t do out of the flexbone.  But just like Navy, if the Veer is rolling, this offense is hard to stop.

Now let’s look at how Notre Dame fared on defense. 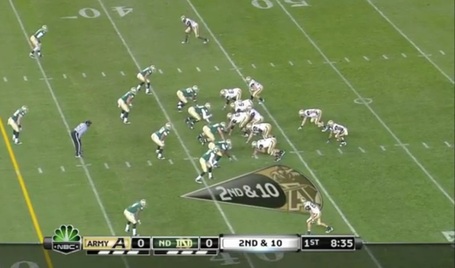 The Irish line up with four down linemen: Ethan Johnson slides inside and Darius Fleming lines up next to him.  Manti Te’o lines up with Brian Smith at linebacker.  Playing where the outside linebackers normally would be are Robert Blanton and Jamoris Slaughter.  Harrison Smith is playing a single high safety about ten yards off the line.

The first drive worried me.  Despite the new look, the defense was repeating the mistakes from the Navy game.  Let’s look at how ND defended the Veer. 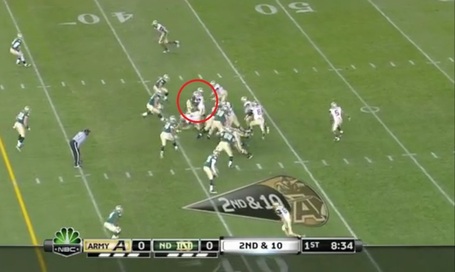 One thing that was different was the defensive ends finally crashing hard on the fullback dive.  Fleming even shoves the tackle as he releases, preventing him from getting up to the second level.  But look at the middle linebackers.  They’re still attacking inside.  This is literally the same defense Notre Dame showed against Navy, but with defensive backs playing outside linebacker and one more man on the line. 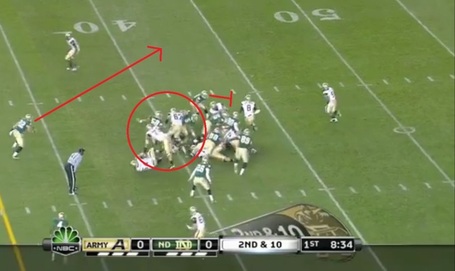 Like before, Blanton steps in the quarterback’s way to force the pitch, and, like before, the middle linebackers are already out of the play.  Harrison Smith has to get down the line to stop the pitch man, but he’s nine yards off the line and just entering his break when the pitch is made. 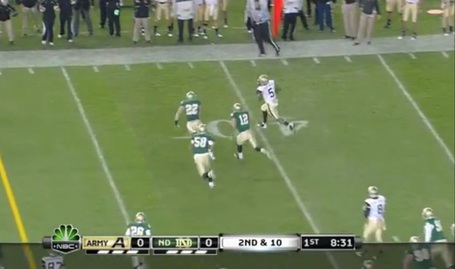 Again, there’s no one playing contain, and the running back is off to the races until someone shoves him out of bounds.

Ok, that was pretty bad.  Notre Dame avoided going down 7-0 when Army quarterback, Trent Steelman*, missed a wide open man in the end zone on 3rd and goal.

I would bet most ND fans were having some pretty terrible flashbacks after that first Army drive.  But fear not: defensive adjustments were (finally) made. 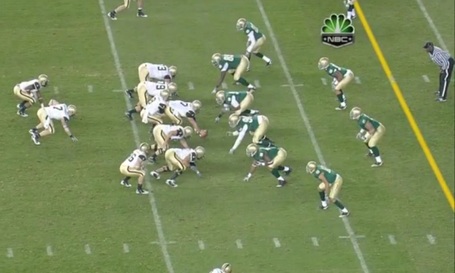 Here’s ND lined up the same way as before.  Army is going to run the Veer to the wing back’s side.  He’s going to be used as a blocker with no pre-snap motion. 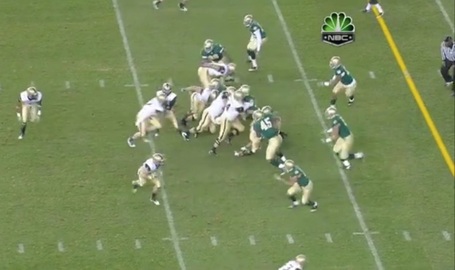 Once again, Fleming shoves the tackle as he goes by and crashes to take away the dive.  Two things are important to note here.  The first is Robert Blanton, who is no longer coming down to cut off the quarterback.  Instead, he’s following the wing back to occupy him as a blocker.  The next is the middle linebackers.  They’re actually staying back and not running inside right into blockers. 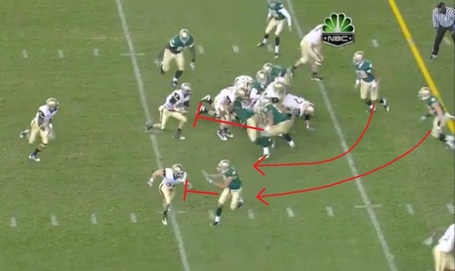 In fact, it’s Te’o who comes down to force the pitch.  Steelman makes a bad read and decides to keep it himself for some reason.  But you can see that Brian and Harrison Smith were there to take the pitch if he had made it.

How about another look? 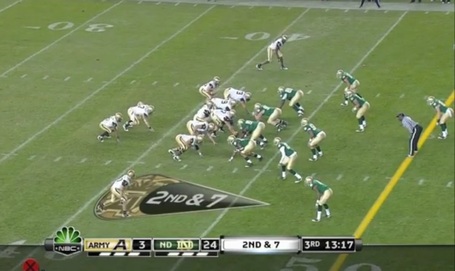 The Irish and Knights are lined up the same way as before.  This time, Army will motion the wing back and use him as the pitch man on the Veer. 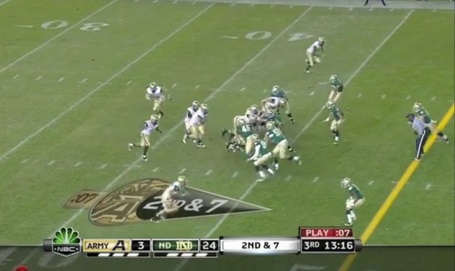 Fleming takes care of the dive and Slaughter takes the quarterback.  Brian Smith comes down (attacking the B-gap!  Not the A-gap! /sheds tear).  Look at Harrison Smith.  He’s already running full speed towards the play, unlike in the first drive where he was still standing and watching at this time. 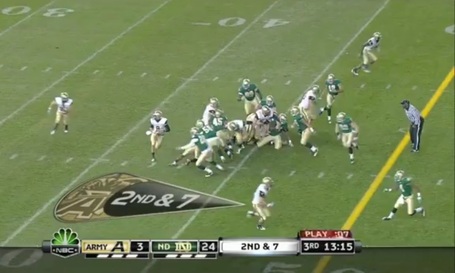 Steelman makes the pitch.  Harrison Smith and Te’o are flowing in the direction of the play.  Slaughter and Brian Smith try to adjust to run down the pitch man. 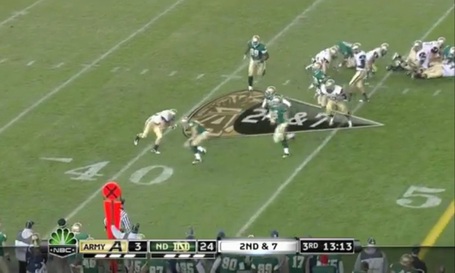 Harrison Smith gets there first and brings him down for a loss.  Te’o and Slaughter probably could have gotten to him also, but wouldn’t have been able to drop him behind the line.

Unlike in the Navy game, Diaco actually mixed up the defense a little bit against the Black Knights.  The Irish showed a 4-3 look a few times. 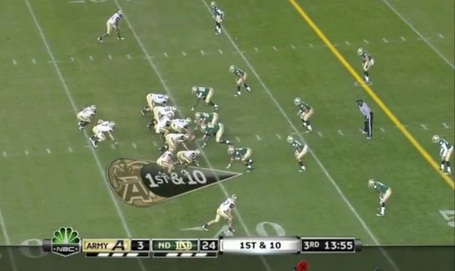 The defensive tackles are lined up right over the center and the ends are outside the offensive tackles.  Te’o is the middle, about five yards back.  Brian Smith and Blanton flank him. 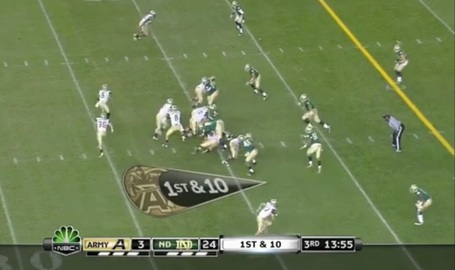 Again, Army motions the wing back on the Veer.  The idea for the Irish is to bait the fullback dive and funnel him right into Te’o and Smith.  The tackles collapse on the center and playside guard and somehow manage to take out the backside guard, too.  Kapron Lewis-Moore plays the QB instead of the FB, and Steelman hands it off. 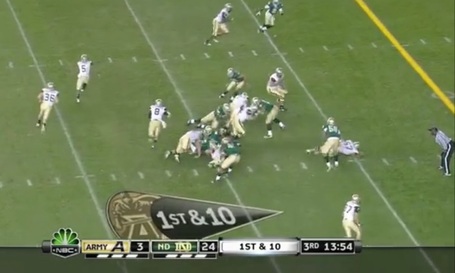 KLM’s move was more of a squat, and is in position to tackle the fullback as he goes by. At the same time, the playside guard isn’t able to get to Te’o in time to block him, and the Knights only gain three yards.

The Irish didn’t use this look a whole lot; it almost concedes about three yards on the Veer and was seen mostly in long yardage situations (or when up three touchdowns).

Irish fans should feel good about the defense’s performance in this game.  The first drive probably led to a lot of hand-wringing after the Knights racked up 78 yards with relative ease.  But the Irish responded and only allowed 96 more yards the rest of the game.  Overall, Diaco made some good adjustments on the Veer, adjustments that were sorely lacking in the Navy game.

I think the biggest adjustment might be the use of a four man front against Army.  In the Navy game, the Irish showed a five man front with the outside linebackers playing on the line.  I understand Diaco’s reasoning.  The idea was to keep forcing the play outside and then wait for the middle linebackers or safeties to get over and clean it up.  However, the MLBs failed to flow and the safeties couldn’t get down fast enough.  Plus, with only two linebackers in the middle, it left the Irish exposed to getting gashed by the fullback if they got blocked.  With the four man front (and with the end actually crashing hard to take away the dive), the linebackers and safety could react to the play easier.  You can see that in the plays outlined above.  Brian Smith and Te’o actually plug up holes, come down on the quarterback, and make plays instead of running into blockers.  Harrison Smith plays centerfield and attacks the ball aggressively.  All of these things were missing against the Midshipmen and it’s good to see the defense actually able to stop the triple option.

But it might be best to temper expectations for next season.  Will these changes work against Navy?  Honestly, probably not.  For one thing, the Navy coaching staff has seen what we did against Army and will definitely have a response ready.  Scheme-wise, I’m not crazy about playing with only one safety back against the flexbone.  I would prefer to use only three linebackers and put another safety back with Harrison Smith.  The defense needs to be able to account for both receivers and both wing backs in the passing game against the flexbone.  Army typically only showed two receivers and one wing back, meaning only one safety was adequate.  Finally, a big part of the defense’s success might have been jumping out to an early lead.  Navy never had to deviate from their base offense, but Army was forced to play catch-up early on, something an option team doesn’t like to do.  But the very fact adjustments were actually made this time is a positive sign and should let Irish fans sleep a little easier in the week leading up to the Navy game in a few months.

*Trent Steelman is a name that can’t possibly be real.  It sounds like the name of a comic book hero who was just a working class joe until an industrial accident gave him superpowers who then vowed to use his abilities to fight the evils of communism and poor hygiene in our nation’s youth.  At least he lived up to his name by joining the Army and becoming a true American hero.